Was Jesus Christ buried in the wrong tomb? Or an unknown tomb? 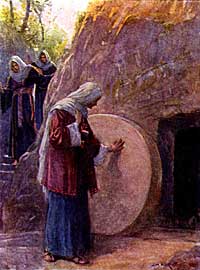 The doctrine of the physical resurrection of Jesus Christ is critical to the Christian faith. But is the evidence conclusive? Numerous alternative scenarios have been postulated over the years. Here are four—with a correspondent response:

Jesus' body was moved to an undisclosed location.

Roman or Jewish authorities moved the body of Jesus to a location completely unknown and undiscovered by Christ's disciples. Perhaps the body was even thrown into a mass burial pit and devoured by dogs.

For starters, this and many other such scenarios completely contradict the testimony of the Gospel writers with regard to Jesus' resurrection and subsequent appearances. This is no small matter. The Biblical record carries considerable, weighty, self-supporting evidence, i.e. prophetic fulfillment, manuscript reliability, archaeological discovery, etc.

But even extra-Biblically this scenario fails, due largely to lack of a sound rationale. Both the Jewish leadership and the Roman government had every interest in laying to rest, not further perpetrating the controversy surrounding Jesus. By simply producing the body of Christ, all reports of His resurrection could have been quickly quashed. To deliberately and finally destroy such evidence would have forever eliminated that possibility, and served only the purposes of Jesus' followers and cause.

Know also that conjecture about crucifixion victims being disposed of in a common pit for the executed near Jerusalem suffered a deadly blow in June of 1968 with the discovery of the remains of Yohanan Ben Ha'galgal, a man who had been crucified, yet was then plainly buried in a family tomb.

Finally, in the event that such a thing did transpire, why wouldn't the authorities have owned up to it rather than accusing Jesus' disciples of stealing His body (Matthew 28:11-15)? Their acknowledgement of such an act would have served their purposes far more effectively than concocting a complex conspiracy theory that could not then be refuted.

Perhaps Mary Magdalene and the other women who were intending to anoint the body of Jesus following the Sabbath got mixed up in the predawn darkness (John 20:1), and arrived at the wrong site. After all, the entire area was full of rock tombs and they were emotionally distraught.

The Gospel account (John 20:15) indicates that it was light enough for the women to see the “gardener,” i.e. Jesus. Furthermore, it was not just the women who visited the tomb where Jesus had been buried—Peter and John also came to the same place (John 20:3-7) when it was light enough for them to notice even details like grave clothes and a head cloth inside the darkened recesses of the tomb. Neither does this postulate explain the angelic presence.

Perhaps in their desire to continue to believe in Jesus, the disciples never even tried to examine the tomb. Could this have been a case of their minds being made up and their not wanting to face the facts?

Even if Jesus' disciples hadn't checked the tomb, Rome would have been fully aware of what had transpired there. Elite Roman Guards units, operating under penalty of death, must have scoured the area before reporting Jesus' body as missing.

So whether the disciples checked the tomb or not is irrelevant. If Rome could have produced Jesus' body, it certainly would have done so.

Jesus' body was taken into custody by a third party.

The variations on this theme range from the bizarre to the ridiculous. One 5th century polemic invented by Toledot Yeshu suggests that a gardener named Juda robbed Jesus' body, tried to blackmail the disciples, and then dragged the corpse through the streets of Jerusalem. Another theory speculates that Joseph of Arimathea confiscated the body.

How could any of this have occurred given Rome’s tight control of the case? And how likely is it that any such clandestine operation would have remained undisclosed for long? Yet, if a hoax had been revealed, how does one then explain the phenomenal growth of the Christian Church?

Text Copyright © 2003, 2004, AIIA Institute, All Rights Reserved—except as noted on attached “Usage and Copyright” page that grants ChristianAnswers.Net users generous rights for putting this page to work in their homes, personal witnessing, churches and schools.