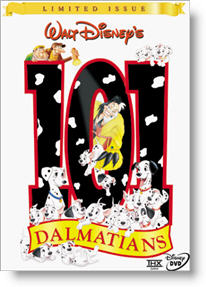 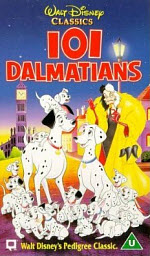 About dogs in the Bible

This Disney film, which uses the same drawing style as “Lady and the Tramp”, belongs somewhere in the all-time animated favorites although it has some questionable material.

Pongo the Dalmatian and his bachelor master Roger manage to “accidentally” meet Perdita and her mistress Anita in a London park, resulting in a “double wedding.” When 15 puppies are born, Anita’s old school friend Cruella deVil wants to buy them as soon as they get their spots, but Roger and Anita aren’t selling. So, Cruella’s henchmen Jasper and Horace simply steal the puppies instead. She’s also bought many other Dalmatian puppies, intending to make them into fur coats when they’re big enough. Even Scotland Yard can’t solve this one, so the animals must rescue the puppies themselves.

The story line itself requires a certain amount of depicted or implied violence, and to that is added a lot of general meanness and gratuitous slapstick. And while there’s no profane language in the usual sense, Cruella constantly calls people “fools,” “idiots,” etc. (see what Jesus says in Matthew 5:21-22 about calling people hateful names). Cruella and her two lackeys could almost be the Three Stooges. Also, there’s a TV show called “What’s My Crime?” in the background.

The positives, of course, include the Dalmatian parents doing whatever is necessary to rescue their children, and other humanized animals helping them all along their journey back home.

(I made it clear to my young daughter that if she began to imitate the way Cruella talks, I’d have to put this and some other tapes away for awhile. So far, I’ve had no problem.)

Positive
I am a Christian and a parent. I don’t find anything objectionable in this film. Some of the other viewers object to Cruella. I agree she is an evil character, but she is obviously evil. I don’t see anything wrong with teaching our kids that there is good and evil, right and wrong. I find her character less offensive than the heros in most films today. Although they are supposed to be the good guys they do many questionable things. Nothing as evil as plotting to make a puppy-skin coat, but lots of little things in an attempt to blur the line between right and wrong. I recommend this movie for everyone including young children. My Ratings: [5/4]

Brad Lewis, age 28
Negative
…this movie is far too scary for small childrens’ viewing. I watched it with my 5 year old nephew and regretted it. The witch in this movie is real creepy, and has probably left enough children with nightmares. My Ratings: [2/3½]

Todd Adams, age 32
Personally, I don’t even let my 7 year old daughter watch the animated version so, I certainly did not let her watch the movie. I think just Cruella alone is enough to scare the “heck” out of a child. It just does not sit with me that her license plate says; “D-E-V-I-L”. Her name is not pronounced that way, but, I think Christians need to be careful. Personally, I myself was creeped out by Cruella and did not watch the whole movie. She is just too evil. I definitely don’t recommend this for anyone. My Ratings: [1/2]

Nicole Kaine, age 29
Comments from young people
To start off, I have to say this was one of my favorite movies when I was younger. However, I will not let this review be biased. I also will have to disagree a little bit with the reviewer in terms of its comparison to “Lady and the Tramp.” There are two things that Disney artists and animators did when making an animation. First, they sketched made the still background, which was generally a tad more realistic than the actual moving components to an animation. Such examples include Bambi, in which the background was extremely realistic (texturally, mainly).

Disney artists started using a style of quickly sketching their characters instead of taking the time to draw them. The background also became significantly abstractly drawn. “101 Dalmatians” really marks the turning point, as it was the first real modern style animation, that stopped at “The Sword and the Stone”. This new animation also relates to its jazzy soundtrack.

In terms of objectionable content, I think the reviewer did do a good job of pointing at the many instances of put-downs that Cruella made throughout the film. I doubt that anyone will find this objectionable, but beware, my younger brother started calling us idiots and imbeciles (we soon quelled that bout of namecalling as soon as it started).

Nevertheless, it is good to be cautious. Anyway, if you haven’t seen this film, you are missing out. Although it is geared toward younger kids, I’m giving my $0.02 worth for adults who might want to get this movie for their kids. Rent it first and see if you like. If you don’t, don’t buy it. If you do, well, that’s your decision. It IS a good addition to your video collection. My Ratings: [3½/4]