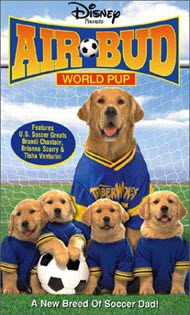 Since basketball and football have already been covered, this third installment in the Air Bud series focuses, predictably, on the popular youth sport of soccer (some humor points are made from the fact that soccer is known as football in most of the world). Not so predictably, the producers pulled out all the stops and even arranged guest appearances by Briana Scurry, Brandi Chastain and Tisha Venturini from the women’s World Cup team.

Although the story suffers from sequelitis (there’s no longer an element of surprise in Buddy the Golden Retriever being able to play any sport involving a ball, and to understand English), it does let life move on somewhat. Josh’s mom marries the Veterinarian; Josh (Kevin Zegers) gets a girlfriend, Emma (Brittany Paige Bouck), and suffers some teenage angst; Buddy also gets a “girlfriend,” and becomes a father.

From the overacted caricature roles to the many improbable—make that impossible—situations, older viewers will be constantly challenged to suspend disbelief. But some of the overdone bits are so far out that they really are funny. As for offensive content, my score is zero. While Buddy’s original owner in the first episode was nasty enough to upset some younger viewers, that’s not the case here. The only “bad guys” are an opposing coach who displays “sexism” and “species-ism,” and two dognappers modeled somewhat after the characters in the animated version of “101 Dalmatians” but without the insult-filled mouths and with only half the brains. If there’s ever a mainstream Hollywood movie where Christian viewers could safely let their guard down and just relax and enjoy the silliness, this would be one.

Positive—This movie was an excellent family movie… My family and I found the messages positive and the story line with the added love interest of Emma Putter excellently portrayed by the young actress Brittany Bouck. We hope as a family to see more movies like this and my three boys are dying to see more of Emma/ Brittany. “She’s the Bomb!”
My Ratings: [Excellent! / 4½]

Jered Wills, age 39
Positive—…this movie has lots for sports fans, animal lovers and lots more… and even comedy! …This movie [is] the coolest!
My Ratings: [Excellent! / 4½]