for violence/gore, language and sexuality 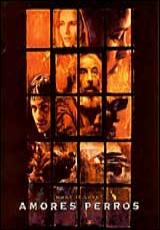 “Amores Perros” is the debut feature film of Mexican director, Alejandro Gonzalez Inarritu. It has opened to much acclaim in the United States, and was nominated for an Oscar for best foreign language film. It is an impressive debut. The movie has its setting in modern-day Mexico City, and it tells three different love stories. Each story has its own unfortunate twist of fate, and all come together tragically in a devastatingly violent car accident which serves as the film’s focal point. From this center, the story moves forward and backward in time. Its circular, “what goes around comes around” progression is similar to, but much better than, the whirlwind plot of “Pulp Fiction”. It looks in some ways like the films Robert Altman used to make about people who can’t connect with each other but whose lives unexpectedly intersect. Steven Soderbergh tried this technique with “Traffic”. I thought the results were mixed. Despite good acting, sharp-shooter editing, and a flashy look, the co-existing stories didn’t seem to gel. They looked contrived, stereotypical, and molded to fit public sensibilities.

“Amores Perros” moves fast for such a long film (2½ hours). The editing is quick and terse. So are the camera movements. Inarritu honed his film-making skills as a director of television commercials so he knows how to get a bang for his buck and do as much as he can in short scenes. There are a number of plot inconsistencies which are bound to occur when the palate is as big as Inarritu’s. The holes are fewer and a lot less glaring than the ones in “Traffic”, maybe because “Amores Perros” achieves a kind of gritty realism without seeming to work so hard for it. “Amores” reminded me of Luis Bunuel’s “Los Olvidados”, a great Mexican film made by a Spanish director. Bunuel, however, was precise and methodical. His film had a rich, textural, almost surreal look. Inarritu doesn’t have the time for precision. He throws everything into the stew, but he doesn’t let the story simmer. He brings it right to a boil, and keeps the heat turned up throughout.

The movie opens with the car crash. Two teenage boys run a red light and collide with a car driven by a beautiful woman who, before the accident, made her living as a model. A haggard grey-haired man of the streets comes upon the scene and examines the wreckage. He sees the unresponsive teenagers and the woman who is screaming for help, but he bypasses them and rescues a wounded rottweiler who lies in the backseat of the boys’ car. The story (the screenplay is written by Mexican novelist, Guillermo Arriaga) branches out from this tragic meeting point to tell the stories of the old man, the model and the teenage boy who owns the dog.

El Chivo (The Goat) is the old man who roams the street adopting and caring for stray dogs. I winced during the early scenes because I feared he would turn out to be another movie caricature of a homeless man: one who despite being disheveled and uncommunicative possesses boundless wisdom, understanding, and kindness (I still cringe when I think of the dumfoundingly unrealistic homeless character in “Grand Canyon”). El Chivo’s story becomes much more complicated as it unfolds. It becomes evident that his life on the streets is a disguise as much as it is an escape. His love for his dogs and for the daughter he abandoned years ago is tarnished by sinister impulses which keeps him rooted to a life of corruption and criminality. The good deeds he sometimes performs do not make up for the evil seeds he plants in his own life and in the lives of others. Ultimately, his ferocity is returned in kind. El Civo is played with subtle grandeur and pathos by Emilio Echevarria. He is perfectly understated in the beginning, and overcomes the maudlin aspects of some of the later scenes, vividly portraying a fallen man whose ghosts keep him from gaining redemption.

El Cibo rescues the rottweiler, named Cofi, from the car of Octavio, a teenage boy. Octavio is played by Gael Garcia Bernal who has a brooding mouth, a broad, flaring nose and dark, fiery eyes. Octavio has trained his pet for illegal dogfighting, a sport at which Cofi excels. The enterprise brings financial rewards for Octavio but tragic consequences for his owner, and for his rescuer. Octavio wants to use the money he wins from dogfighting to help his sister-in-law, Susana (Vanessa Bauche) escape her oppressive life as a poor mother married to Octavio’s abusive brother, a petty, incompetent criminal. Octavio’s plans end in misfortune for all. No one escapes or is made whole from his efforts. Only Cofi seems to have any recuperative power. Susana remarks wryly about Octavio’s plans when she infers that God gave man the ability to make plans in order to give himself something to laugh about.

Another dog, Richie, plays prominently in the third story about Valeria (Goya Toledo), a fashion model who, at the peak of her success, enters into an affair with a married man. Her car accident occurs the moment the affair is ordained: her lover leaves his wife and children and moves in with her. She does not live in the chaos and squalor that are the hallmarks of Cibo’s and Octavio’s lives. Far from it. She lives a glamorous and charmed life. Her image is pasted on magazine covers and billboards all over Mexico City. Her dog would not be seen at a dogfight. Like his owner, Richie is perfectly coiffed and groomed. Until he disappears into a hole in the lovers’ apartment (the floors are still being renovated). Valeria can’t look for him because she is confined to a wheelchair, her legs no longer sleek and perfect but scarred and weighted down with a large metal fixator device. The lover can’t help too much either. He feels guilty about Valeria’s accident and about the family he left behind. The apartment is a “de modo” marvel except for the hole which has yet to be patched up. Underneath the surface of the floor is a family of rats which may be eating Richie if he’s not feeding on them. Despite the infestation in the apartment, and in the lovers’ lives, the dog in the picture once again proves resilient. The people, however, do not.

“Amores Perros” weaves these three stories into a mesmerizing and startlingly violent picture of contemporary urban life. The dog fights which are frighteningly brutal are a metaphor of the savagery that dominates modern culture. These bloody games take pace in decayed buildings and in abandoned swimming pools, once images of modern cultural dreams. The filth, the overblown machismo and the complete disregard for any kind of human feeling all come together in these makeshift rings. The film has received more criticism for its depiction of animal cruelty than it has for its display of human brutality. The opening credits even contain a disclaimer that states that no animals were harmed during the making of the film. Nonetheless, the fights look brazenly real, no doubt the effect of some first-rate editing and camerawork. Alfred Hitchcock made a movie called “Sabatoge” in 1936. In the film, a little boy unknowingly carries a bomb wrapped inside a package onto a bus. The bomb blows up, killing the boy, several passengers and a dog. Hitchcock claimed that he drew cries of outrage from many viewers, not because innocent people and a child were killed, but because a dog was blown up. Those same emotions seem to be at play with this controversy, and Inarriitu surely was onto them when he made the film. The dichotomy is exploited quite well in the story of El Chivo whose love for living things does not extend beyond his beloved canines. Humanity is a commodity for him; something to be exploited and discarded. His comeuppance comes when his devotion to all things canine brings about an ironic change in his life, and in his dogs’.

Despite some plot weaknesses and some cliches (the “walk through the barren wasteland” ending is by now a tired one), “Amores Perros” is a cinematic tour de force and a chilling cautionary tale of the price that must be paid for excess. The urban landscape offers no hope or salvation for the characters. There is no ray of light in this dark panorama of death and destruction. Even the shrine in the stairway of Octavio’s family’s apartment (he makes the sign of the cross when he passes it) offers little solace. There is no overt Christian message here, but the warning that no sin goes unpunished is inescapable. What the story lacks is redemption or even insight on the part of the characters into what has brought them to the depths of existence.

Although teenagers play major parts in the story, this is not a film for children. There is frequent foul language and some graphic sex. The violence is vivid and constant. “Amores Perros” is not the great film that many critics are hailing it to be, but it is a moving experience for those who can tolerate the extreme violence.

Movie Critics
…at least 47 f-words (in English subtitles)…various sexual encounters are seen and/or heard and include related sounds, making out, groping, movement and some nudity…