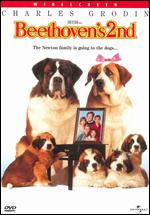 The first sequel to an entertaining and mostly-clean family film, this film enhances its charm by adding a litter of St. Bernard puppies to the mix.

Beethoven finds a mate (also a St. Bernard) and becomes a father. However, the puppies' mother “Missy” is owned by a couple in process of divorce. The nasty wife, Regina (Debi Mazar), who doesn’t really care for the dog, is using her as leverage against the husband. In Cruella DeVil style, she also has nasty plans for the puppies, talks offhand about killing them (before she learns of their value as purebreds). The Newton kids overhear this threat, and feel compelled to interfere by hiding the puppies. So we have dog-napping, hiding and chase scenes.

I made the common mistake of not pre-screening this one. Since it was a sequel with the same MPAA rating as the original (which we’d watched the previous week), I let my 9-year-old daughter and her friend watch it while I worked in the next room and half-listened. It appeared that the only villain of note would be Regina. Suddenly my attention was caught by a sequence involving a bad choice by Ryce (Nicholle Tom) to attend a teen drinking party with a suave, fast-talking boy who plans to date-rape her while his friends pour beer on Beethoven, who’s been left tied up outside. Of course Beethoven saves both himself and Ryce; and she’s wiser for the experience. But be warned that that kind of edgy content is included.

As you’d expect, everything turns out fine in the end.