for language and brief strong violence 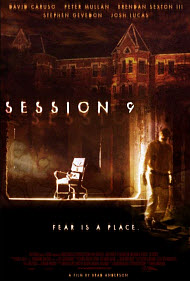 If God created Satan, and Satan is evil, is evil God’s fault? Answer

Tree of the knowledge of good and evil

Modern day horror movies are polished to the point of being lacquered. The current crop are overloaded with glitz, irony and sarcasm. They look like French Roccoco paintings that have blood splattered on them. they’re weak, pallid and disconnected, unable to grab a viewer the way a good myth should. The “Scream” movies, parodies in themselves, have opened the doors to trashcan takeoffs (the “Scary Movie” films) which degrade their subjects instead of paying homage to them. The newer films, even the spoofs, are rarely funny (the jokes never match the gems heard in early horror movies such as James Whale’s “Bride of Frankenstein” or Alfred Hitchcock’s “Blackmail”), and they’ve become too predictable to be scary.

“Session 9” bucks this trend. It has no glitz and no irony. Shot masterfully with a digital camera, it is a subdued film whose bloodletting is minimal. The director, Brad Anderson, has paired down the extraneous elements, and has put together a bare—bones, but very effective horror movie.

The action takes place in an abandoned insane asylum, an enormous architectural marvel which is no longer of any clinical use. It has all the characteristics (its corridors spread out “like bat wings” from the central body) of a gothic haunted house: it is dark and damp, and mostly silent except for the eerie sounds of dripping water, fluttering pigeon wings and echoing footsteps. The sight of leftover artifacts from the days when such hospitals used physical restraints, crude electroshock therapy and cold water immersion to treat patients adds to the gloom. The history of the patients who once occupied the asylum continues to haunt the building. It may be an imposing structure on the outside, but it is rotting from within.

A group of five men are hired to reverse the rot in an effort to clean up the building and make it acceptable for architectural landmark status. Their main task is to rid the building of asbestos. As they work the detail clad in white protective body suits and voice muffling gas masks, their own idiosyncracies and borderline personalities seem to germinate like contaminated spores in an atmosphere filled with the harrowing memories of the patients who over the years occupied the asylum. Gordon (Peter Mullan), an edgy workaholic, is the leader of the group, and is desperate to complete the job in order to provide for his family. His nephew, Jeff (Brendon Sexton), the youngest and least experienced member of the crew, has a phobic fear of the dark. Phil (David Caruso), is the most seasoned of the workers, but he has a drug dependency problem, as well as a visceral contempt for another worker, Hank (Josh Lucas) whose weakness is gambling. Hank has stolen Phil’s girlfriend and won’t let Phil forget it.

As the job moves forward, odd things start to happen. One character hears voices. Another sees things. When one of the men disappears the movie moves into gear, and the thrills begin in earnest. The point of view shifts back and forth, not in a confusing way, but in a way that brings the mens’ conflicts into focus. There are few jolts; the suspense builds gradually, at a simmering, aching pace. The puzzle lies in what has caused the disappearance. Is the answer on the tapes, especially on the final ninth session? Has one of the men been overcome by a ghost from the hospital’s past? Is the house truly haunted? Will the asbestos prove to be the real bogey-man? Revealing any more of the story may give away the plot, so I’ll stop here, but I do recommend this film to lovers of suspense and horror films. It does not disappoint. And it restored my floundering faith in the genre.

There is no real religious significance in “Session 9”, although it does not mock religion the way many modern horror movies do. There is some strong language in the film, but there is no sex. The cast is almost all male. One theme of horror movies that recurs here is the price that must be paid for promiscuous sex. Unable to confront this directly in an age of “sexual liberation” where judgment or punishment is considered as bad as the sin, the horror movie can treat it indirectly by equating sex with death. In the “Friday the 13th,” “Nightmare on Elm Street,” and “Halloween” movies, the loose girl is always the first one to die. The same idea reexerts itself here, but we’re saved the gratuitous sex scene that usually goes with it.

The film does contain some misinformation that bothered me. The lawyer (played by Stevphen Gevedon, who also wrote the screenplay) says that the psychiatric hospital was forced to close because of a scandal (this bit I can accept because in a way it plays into the plot), but mostly because of budget cuts. Huh? Does Gevedon really expect movie viewers, or anybody, to believe that all the psychiatric hospitals were closed and all the patients were released in the 1970s with the wave of a politician’s or a beaurocrat’s hand? The hospitals closed because the advances in drug therapy allowed patients to function, even if in many cases it was only minimally, outside of those awful places, and because the press was successful in exposing the abhorrent conditions inside many of the hospitals. The makers of “Session 9” have made a good summer scare movie. They toy around with the root causes of evil, and it serves their plot well. But someone needs to tell these guys that there are worse things in this world.