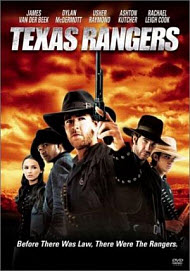 Burial in the Bible

The Texas Rangers is the oldest law enforcement body on the North American continent with statewide jurisdiction. Some, when they hear this name, think immediately of the baseball team. Others picture the bearded Chuck Norris and his role as Walker. Numerous book, movies, and TV shows have tried to tell their captivating story. The Texas Rangers today are synonymous with integrity, courage, and honor.

The history of the Rangers is as old as Texas itself. In 1820 Stephen F. Austin requested and received permission from the Mexican government for 300 families to enter the territory of Texas. By 1823, the need became apparent to create a force in order to provide the pioneers with protection from hostile elements. One of its leaders was Leander H. McNeely (1844-1877). He contracted tuberculosis at a young age and it eventually led to his death. McNeely fought in the civil war and in 1874 was commissioned to head a special force of Texas Rangers called the Washington County Volunteers. McNeely’s Rangers were very active in suppressing lawlessness in the Nueces Strip, an area along the Rio Grande border. The special force was effective, but many saw their tactics as too aggressive. His men often crossed over the Mexican border to engage in gun battles with bandits.

“Texas Rangers” tries to capture that time in history. Based on a story by George Durham called Taming of Neuces Strip: The Story of McNelly’s Rangers, this take by screenwriter Scott Busby is well worth its time. Director Steve Miner (“Wild Hearts Can’t Be Broken,” “Forever Young”) shows expert direction and vision. While it is not completely accurate in historic detail, it does capture the spirit and trials of the late 19th century. It is also much better than Miner’s last two outings (“Lake Placid,” “Halloween H2O”).

The movie begins with a bitter Leander McNeely (Dylan McDermott) digging his own grave. We are told that he has lost his wife and children. He is summoned by the governor to organize the Texas Rangers in his area. A group of bandits led by John King Fisher (Alfred Molina) are stealing cattle and murdering anyone that stands in their way. One of McNeely’s recruits is Lincoln Rogers Dunnison (James Van Der Beek). He has just witnessed the brutal killing of his parents and seeks justice. Lincoln is not very good with weapons, but because of his education, McNeely accepts his enlistment. Along the way Lincoln learns how to defend himself and how to be a leader.

The acting in this film is actually quite good. Tom Skerritt, Rachael Leigh Cook, and Randy Travis all turn in noteworthy performances. But this film has been upstaged in the theaters by film losers. (I had to drive about 30 minutes to find a theater that was showing it). “Texas Rangers” was only released into 402 screens in the U.S. and 17 in Canada. Many theaters are still holding their screens for “Monsters, Inc.” and “Harry Potter….” It’s a shame because this film is much better than “Out Cold” and “The Black Knight”. There is practically no sex (one scene that ends with a discussion about rape) and little profanity (3 uses of the “s” word, 6 damns, 6 hells, and 1 instance of taking the Lord’s name in vain). There is no presence of alcohol or tobacco. But there is plenty of violence, however not overdone. Some bloodshed occurs and some people are hung.

Some might be offended by the plot angle portraying McNeely as a former minister. The only historical information that I could confirm was that he herded sheep. “Texas Rangers” captures the crossroads between revenge and true law enforcement. The film was shot in Calgary, Canada and includes a spectacular view. The lush scenery is captivating and helps us dismiss the fact that it looks nothing like south Texas.

Except for a few objectionable elements, I would strongly recommend this film. But parents, do observe the PG-13 rating. You may consider suggesting to your local theater replacing “Out Cold” or “The Black Night” with the head-and-shoulders-above “Texas Rangers”.

Positive—I’d actually been looking forward to this release for a long time, namely due to the fact that it contains two of my favorite entertainers (Dylan McDermott and Rachael Leigh Cook). So when I found out it was devoid of smut, I raced to the theater… and came out with mixed reactions. Texas Rangers has a good heart and *could have been* a great film. Sadly, it isn’t. It falls far short of the potential with poor character development and too much violence. The scriptwriter started off excellently… the Spanish gypsy girl whose husband is killed and herself taken prisoner by the Bandits… McNelly with his shadowed past and shaken faith… Dunnison, whose family was slaughtered before his eyes… the young black man who is determined to prove himself a sharpshooter… but then… halts. We’re left trying to guess at the character’s emotional reactions to their jobs, their friends, their struggles.

McNelly spends a few minutes after a raid gone wrong alone in his tent, near ly in tears… The one bright point in the film is the unexpected—things that we never see coming. A traitor riding among the Rangers with a personal vendetta against McNelly (the scene in which he reveals himself leaps out of nowhere and is excellent in its intensity).

A planted distraction by the enemy, a false lead to purposely send them astray so that a major stronghold can be attacked. The most poignant scene for me personally was when McNelly was going to kill a young woman who had knowingly betrayed them to save her own skin. Drawing, he holds a revolver to her head… but Dunnison steps into its path and confronts him. “She isn’t a Bandit,” he says, “she’s a victim. Show them that we’re not like them!”… and McNelly, after a long, painful moment, relaxes the hammer. Some other memorable phrases—“When they remember the Rangers, let them remember us as men of justice rather than vengeance.” I don’t know if it’s worth full admission. The film falls far short of its huge potential. Christians in particular will miss a scene in which McNelly turns completely back to God. But it’s much cleaner and more responsible than the majority of films out this season and is worth a matinee, if westerns are your cup of tea—and you don’t mind nearly nonstop (but non-bloody) violence. I came away disappointed that the film fell short, but not sorry I had seen it.
My Ratings: [Better than Average / 4½]