This offering by Iran’s Mohsen Makhmalbaf throws a damning and unforgiving light on the occupation by the Taliban of Afghanistan. Like most Iranian films, this is done by profound subtlety and rich observation that pervades your very core. 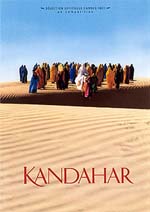 The story is based on a true story of an Afghan woman, Nafas (literal translation: breath), who had escaped the Taliban to become a journalist in Canada only to return to try and find her friend (in the film, her sister) before she commits suicide on the last eclipse of the twentieth century. Not only has her sister lost both legs after stepping on a land mine disguised as a doll, but she simply cannot take the ruin and decay of women living in Afghanistan anymore.

Recording her journey on a walkman for her sister, Nafas starts at the Iran—Afghan border, paying an itinerant trader to take her to Kandahar where she believes her sister resides. Along the way there are many incidents that impede her race against the sun. These are shown with such delicacy and discernment that one is simply lost for words.

The landscape is caught well by the the cinematographer, Ebraham Ghafouri, who shows it as it is: relentless, unmerciful and hostile. Within this arid, beautiful sandscape Nafas encounters memorable characters that all show a unique aspect to life in Afghanistan (played largely by a non-professional cast). The humble, kind and idealistic African American doctor who came looking for God; the child, Khak (literal translation: dust) expelled from Koranic School who tries to bribe her and sell her a ring taken from a skeleton; the man who takes false legs from the Red Cross for his mother but tries to sell it moments later; the mullah who asks his students to define Kalashnikov alongside recitals of the Koran.

With these people come the threat of death, the threat of being robbed, the threat of arrest at the next turning, and everywhere we see the results of famine and war in the mass of widows and maimed survivors. Indeed Nafas points out early on that for every five minutes in the last five years, someone had died in Afghanistan.

However, the most ubiquitous theme is enslavement, and of the many types portrayed here, the most common is of women to burqa’s, their head to toe covering of cloth so apt in its symbolism of entrapment. Interesting to note that in a BBC interview, the actress said that it became a refuge for her. It became her comfort zone, her safe place from the outside world, remaining completely unrecognisable yet being able to see all.

Farsi and Pashtou with English Subtitles. Closest MPAA rating would be “PG”.

Positive—I saw this movie a number of months ago with my wife and two children (13 and 10). It was during the aftermath of the September 11 tragedy. Not knowing a lot about the Taliban and Afghanistan it was very interesting. You feel for the main character as she overcomes hurdles in her quest to rescue her sister—all the time knowing that this is a true story keeps you on the edge of your seat.

I have seen many films since this one, but somehow this film sticks in my mind in a somewhat haunting way. I would recommend it for anyone interested in foreign cultures and broadening their worldview. This movie offered a time to discuss issues portrayed in the film with our two children.
My Ratings: [Good / 5]