Today’s Prayer Focus
Lagaan: Once Upon a Time In India
MPA Rating:

for language and some violence 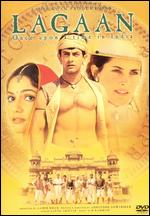 “Lagaan: Once Upon a Time in India” is a historical romantic film that deals with the time of the English Raj, the Victorian period when the British Empire ruled over India. The story centers on Bhuwan, his beloved Gauri, the arrogant British officer, Captain Russell and the British Empire.

The lagaan is a tax that was imposed upon Indian citizens by the British Empire. For the various tribes, races and sects in the Champanner region, the lagaan not only represented British imperialism but it was also material deprivation. A long-standing drought is in effect and the British “unmindful of the plight of the people they rule” demand payment. As the culmination of a dispute, Bhuwan bets the arrogant Captain Russell that he and his fellow villagers will be able to bet the occupying British officers to a game of cricket. Triple or nothing.

Bollywood is the name of the Indian film industry and annually, it makes more films than Hollywood. Most of these films are rarely seen by Americans. But Lagaan was a surprising hit—for a subtitled Indian film—in Europe, the United Kingdom, Australia and North America. How the film managed to interest so many people—is tax and cricket exciting?—is due to demographics—a large growing population of East Indians in the western world—and good old-fashioned entertainment. Here is a drama with dance numbers, love song, hymns to the gods, and a tried-and-true everything-depends-on-it important ball-game.

The British may have considered their rule over India to be imperative—Warlords were everywhere and religious and racial strife threatened—but the inhabitants of India, like the oppressed inhabitants of most captured nations, chafed under the occupation of this white tribe that felt God had called them to maintain order.

Although subtitled, the film is universal and is good family fun with no sex and old-fashioned romance. Although the love of the villagers for their spiritual lord is evident in one scene, Christians will find the polytheism most problematical. If they have children, they will have to explain the difference between Krishna and Jesus Christ, and all those many many gods. And of course, there is the problem of characters making bets that could bring on more financial disaster. The film features a character who is an “untouchable”—now called the Dalits—and gives us a glimpse of how these people were and still are treated. A very good film.

Positive—Simply put, superb. If you’ve never seen a Bollywood movie before, this is an excellent place to start. More often than not, they are most moral films, not even featuring kissing! Lagaan is no different—Objectionable elements include some mild bad language, historically correct racism from the British, and accurate portrayal of devotion to the Hindu religion. Personally, seeing as this is the natural religion of the people involved, I don’t really see this as a problem. In fact, it could start a useful discussion on world religion with children.

Being a Bollywood movie, this film features a number of extremely enjoyable musical sections, complete with imaginative dance routines. This will come as something of a surprise to some, and the nearest thing that Hollywood has ever produced to the musical nature of Bollywood is Moulin Rouge. If you enjoy this film and desire to see more that India has to offer, I would also advise you to check out Kabhi Kushi Kabhi Ghum, Monsoon Wedding (although there is not really any singing, and there is a fair bit of foul language) or Kutch Kutch Hotai Hai.
My Ratings: [Average / 5]