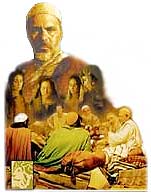 When many people think of “Christian Film,” what often comes to mind is end-times prophecy films like “Thief in the Night”, “Left Behind,” or “The Omega Code”. Such films can certainly be effective (though in my opinion there are too many of that genre floating around). The Messiah: Prophecy Fulfilled takes a look at prophecy too, but in this case it’s the Old Testament prophecies that point to a coming Messiah fulfilled 100% in the person of Jesus Christ.

Veteran actor Nick Mancuso (“Revelation,” “Tribulation,” “Judgment”) has now done both styles of “prophecy” films, though his role as a Jewish Rabbi in The Messiah: Prophecy Fulfilled is certainly more engaging and endearing than his role as the Antichrist in the aforementioned Cloud Ten Pictures’ titles. Set in the years directly following the Messiah’s crucifixion, Mancuso plays the zealous firsthand witness to Jesus’ ministry, death, and time upon the Earth after his resurrection. Once a skeptic, he comes to believe that Jesus is truly the long awaited Messiah that the Torah foretells.

Gathering with his family for the Jewish observance of Passover, Rabbi Yehudah (still scorned by some of his family, namely two younger brothers, for his acceptance of Yeshua as the Messiah) shares the Seder meal and explains in detail how the Seder itself, as well as the prophecies of the Torah, have been fulfilled only in Yeshua (Jesus).

Technically, The Messiah: Prophecy Fulfilled is a joy to watch. The photography is smooth and fluid, with good use of lighting and set placement. Mancuso as the Rabbi is convincing in his role and comes across as a compassionate man who longs to share the truth of Jesus with his doubting family members. My expectations for The Messiah: Prophecy Fulfilled were happily far succeeded.

As a Gentile follower of the prophesied Messiah, I found it particularly engaging to take a look at Jesus from the unique cultural perspective of the Jewish faith and culture. Muslims, too, will find many similarities in culture and, if they are open to a historically accurate look at the prophecies of one of the most revered Prophets of the Islamic faith, there is much to be learned. The Messiah: Prophecy Fulfilled is an excellent tool for sharing with those who may grapple with who Jesus really was and is today.

(Formerly known as “Messiah in the Passover”)

► More information on “The Messiah: Prophecy Fulfilled” / About the writer of this film

Detra Pugh, age 51 (USA)
Positive—‘The Messiah: Prophecy Fulfilled’ is the best video I’ve seen that presents a Messianic Jewish perspective on the Passover. Christians will be amazed as the roots of their faith are revealed. A moving and entertaining educational drama with a solid performance by veteran actor Nick Mancuso.