To End All Wars

for language and war related violence. 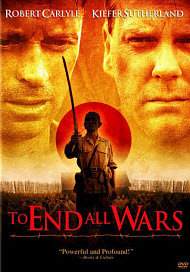 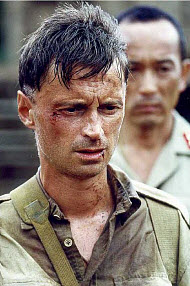 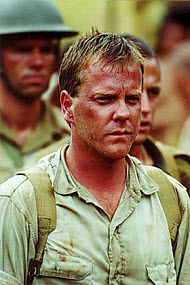 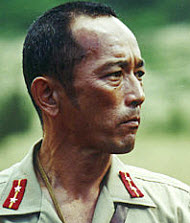 Who was the Christian that was crucified by the Japanese guard? Dusty Miller (martyr)

Who was author Ernest Gordon?

mercy in the Bible

Forgiveness and suffering from a Biblical perspective

How can I be and feel forgiven?

If God knows I am hurting, why doesn’t He help me?

“In a jungle war of survival, they learned sacrifice. In a prison of brutal confinement, they found true freedom.”

War movies have been in vogue for some years now. Just looking into the recent past we’ve seen the likes of “Saving Private Ryan,” “Pearl Harbor,” “The Thin Red Line,” “Schindler’s List,” “Hart’s War,” “Uprising,” “Life is Beautiful,” and “Enemy at the Gates”—and these are just WWII films! Looking for a common running thread we find that 1) “war is hell” (which it is) and 2) mankind, put in extraordinary times, can either succumb to their oppressors or rise to overcome them.

“To End All Wars” is one such film. Rather then focusing on the plight of the Jewish people, this story centers around the true-life events of Ernest Gordon, author of Through the Valley of the Kwai. Gordon and his entire Scottish “Sutherland Highlanders” division were captured after the fall of Singapore and held deep within the Southeast Asian jungle. “The Bridge on the River Kwai” (1957) tells the story now known to so many; these sickly POWs forced to build a railroad running for over 400km through some of the harshest terrain on the planet. But while “To End All Wars” covers some of the same territory, it is wholly a different film.

What makes this film unique is the redemptive and *don’t choke* Biblical theme of forgiveness. Irish-born actor Ciarán McMenamin portrays young soldier Captain Gordon who finds his faith at the selflessly caring hands of British POW Dusty Miller (Mark Strong, “One Against the Wind,” “Sunshine”). But while these two men begin to study and teach other POWs what it means to “turn the other cheek,” Major Ian Campbell (Robert Carlyle, “The Full Monty,” “Angela’s Ashes”) works at putting together an escape plan that will make their Japanese captors suffer. American fighter Lt. Tom Reardon (Kiefer Sutherland, “Eye for an Eye,” “Flatliners”, TV’s “24”) joins neither camp at first. He selfishly works at taking care of himself and only himself until a turning point comes that leads him to follow the higher road.

Like “Saving Private Ryan” and “Blackhawk Down”, “To End All Wars” is not for the squeamish. It is a solidly “R” rated film due to the war-related violence (very realistic, very bloody, straight from real-life), non-sexual male nudity, and offensive language (though the Lord’s name in vain was thankfully absent). Children and anyone else who could be deeply disturbed by the violence should avoid the film for this reason. Yet those who are willing to endure will find a film that shines brightly for its moral Christian worldview.

Such ultimate questions raised in this Oscar-caliber film include “Is there any higher reason to live?” “Do I have a purpose in life?” “How can I forgive those who have wronged me?” and “What would make a man once so selfish sacrifice himself for others?” (as one character in the film does). For answers, it is our prayer that those who see “TEAW” will turn to the Bible which is so highly regarded as the ultimate guidebook to life. (For a start, see the answers provided at right.) That means even the Christian audience who, for far too many, hold their own grudges and issues of unforgiveness.

If you are an apprentice to Christ and already name Him as your role model to strive towards, “To End All Wars” would be an excellent film to view with those who don’t yet have hope in their lives. The most impact will come from a follow-up discussion after seeing the film. Raise these tough issues and let the discussion go on from there.

Technically, “To End All Wars” is flawless. From the acting, to script, to filming, to the solid moral core. Let us pray for more of these to hit the big screen as, according to ministries working from within, Hollywood finds itself in an introspective and spiritually-seeking mode after 9/11. Kudos to Producer Jack Hafer, Director David L. Cunningham, and others who had a part in this noteworthy performance. You’d have to be a stone to not be moved by it, but Christ said that even “the stones will cry out” (Luke 19:40).

At the film’s conclusion, the real Ernest Gordon (who went on to immigrate to the U.S. and became Dean of the Chapel at Princeton University for 26 years) is filmed on location at the River Kwai in Thailand during a 2000 meeting with former adversary Takashi Nagase in a touching reconciliation reunion.

Positive
Positive—“To End All Wars” helped to remove a 45-year regret of Ernest Gordon that “Bridge on the River Kwai” had so distorted the truth of his story “Through the Valley of the Kwai.” Dr. Gordon told us students right after the now-famous movie came out in 1957 that besides fabricating the blowing up of the bridge on the River Kwai, Hollywood had totally left out his telling of the crucial element that had enabled Gordon and his fellow prisoners to survive the ordeal that took the lives of 100,000+ POWs and civilians during construction of the Burma-Siam railroad: namely, their Christian faith!

Finally, after 45 years, Ernest Gordon got to see toward the end of his life, production of “To End All Wars,” the true telling of his story and that of the many POWs who came to Christ during that terrible time. The story of Christian forgiveness and reconciliation to their captors is shown poignantly at the film’s end, as the real Ernest Gordon and Takashi Nagase meet at the site of the bridge on the River Kwai and at one of the huge memorial cemeteries.

This is the real story that deserves Academy Award recognition.
My Ratings: Moral rating: Excellent! / Moviemaking quality: 5
R. H. Van Fossen, Jr., age 74 (USA)
Positive—Ernest Gordon’s story of the transformational power of God’s love and forgiveness was instrumental in guiding my father to faith in Christ almost 40 years ago. That same story is vividly and shockingly captured in this film. When I saw a special preview at Dr Gordon’s memorial service earlier this year at Princeton Univ., it seemed as if the entire theater was sobbing in horror at the depths to which humanity can sink but also in wonder at the heights to which God’s grace can raise us. A great film!
My Ratings: [Better than Average / 5]
John W. Potter, age 33
Positive—…Why this film has a special place in my heart is because I write music for film an TV and am constantly challenged to look for ways to express my faith in a way that can be received and understood by my peers. I watch the majority of the film and TV industry consistently mock and degrade anything that has overtones of religious faith, particularly Christian faith.

So how does a person of faith start a conversation with a world bent on looking for ways to undermine and deconstructionalise anything that carries Christian content? One might start with a book based on a true story that carries indisputable faith, courage, love and virtue in a setting that flies in the face of human nature. One would do it with excellence and without compromise regardless of what the world or even the church might have to say about the graphic nature of the depravity of man. One would try to walk up the middle of both lines of prejudice with a bullet proof example of these attributes and throw the gauntlet down to believer and unbeliever as an indictment to us all to challenge our beliefs, and then summons us to take an inventory of our lives and to ask the ultimate questions of who am I, why am I here and where am I going?

One might do all these things and title it: “TO END ALL WARS.” My hat’s off to you Jack Hafer, David Cunningham and Penelope Foster, you did a fine job and are setting the precedent for good faith based film making.
Ken Tamplin