for action violence, mild language and some sensual content. 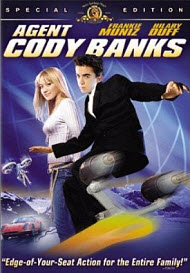 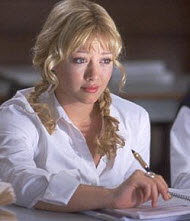 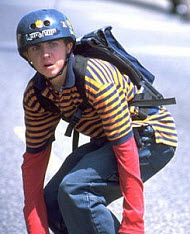 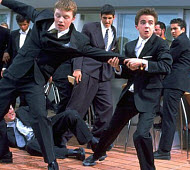 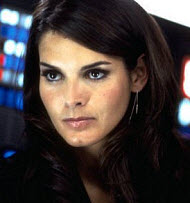 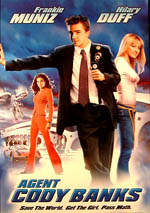 “Save the world. Get the girl. Pass math.”

It’s official. The MPA is now trying to expand the boundaries of PG films. Not only will parents and discerning adults continue to have to screen PG-13 movies for offensive content, but now they must also place PG releases under microscopic scrutiny. “Agent Cody Banks” is the second release in 2003 to contain more than a PG share of offensive material, the first being “Kangaroo Jack”. According to the new farcical rating system, a PG film can apparently contain wall-to-wall violence, racial stereotypes, toilet humor and surprisingly explicit sexual innuendoes (voyeurism included). It is becoming increasingly clear that the MPA is in serious need of reform and is now officially irresponsible in EVERY ratings category.

MGM studio’s version of a kid’s spy/action film pales in comparison to the tasteful Dimension studio release of “Spy Kids” and “Spy Kids 2”. Both of these movies were fun, in addition to being value—and family-centered. “Agent Cody Banks”, however, is the most violent kids movie since, well, “Die Another Day”.

This film stars Frankie Muniz (“Malcolm in the Middle,” “Big Fat Liar”) as a young CIA recruit. He is portrayed as smooth and resourceful as an action hero, but extremely shy around girls. Cody’s gifts were discovered at a phony CIA summer camp.

Now to have a true 007 rip-off, you must have an evil villain who’s preoccupied with world domination. Enter the evil Brinkman (Ian McShane) and his co-conspirator Molay (Arnold Vosloo of “The Mummy”). They plan to exploit Dr. Connors (Martin Donovan) tiny naobot technology. These naobots were created for noble environmental purposes like cleaning up oil spills. Brinkman is going to use them to destroy all the guidance systems in our missile defense system.

Cody Banks’ mission, whether he accepts it or not, is to get cozy with Dr. Connors’ daughter Natalie (Hilary Duff). Can Cody overcome his shyness of girls? Can he stop the evil Brinkman? Can he get his driver’s license in time to drive really cool cars? The answers to these and other questions are more than obvious in a script that is very weak despite having five different writers (another example of quantity not equaling quality). Aiding Banks in his quest is Ronica Miles (Angie Harmon). Ronica is his CIA handler and is always found in sultry and revealing outfits that tempt our 15-year-old agent to use his X-Ray glasses to check out her undergarments. Not even the gadgets and eye candy are enough to save this predictable excuse for a kids movie. Even the character of Natalie spends most of her time as a damsel in distress (“help save me”).

My strong recommendation is to skip this movie. It doesn’t hold a candle to the imaginative “Spy Kids” series. Your children deserve more than parents being portrayed as clueless and women presented as mere sex objects. Don’t they?

Positive
Positive—Other than one scene with too much cleavage showing on a female CIA agent, the movie was non-offensive. I went with my three daughters and didn’t feel uncomfortable with what they were seeing (a rarity for PG). The young agent being completely tongue tied around girls adds an element of humor.
My Ratings: [Better than Average / 3]

Ken, age 41
Negative
Negative—I haven’t seen this movie but was appalled when I heard of the scene where a Special Needs child is ridiculed. As a parent of a special needs kid, that is unacceptable. It is hard enough having a child with special needs let alone watching a film where one is being teased. My children will not be allowed to see this movie.

Debi, age 37
Negative—The writers of “Agent Cody Banks” made a grave error in their script: In the movie, a boy has trouble talking to girls because he is so nervous. The girls then comment, “Are you in special education?” In fact, the girl says this in front of all the other kids, who roar with laughter. Did MGM think this was funny? Is their insensitivity and lack of tact really something no one but parents of special-needs kids notice? I think not. And I think MGM just made a mistake. I find this movie to be an insult to children with speaking disabilities and a put-down to children who need special education. How can anyone think it’s okay to make fun of children who struggle to speak or who need special education? How wrong. I am the mom of a child with a speech disability. But, I would hope as Christians, we would consider comments like these unacceptable… and movies like “Agent Cody Banks” thereby unworthy of our time, money and attention.
My Ratings: [Somewhat Offensive / 2]

Cara Galleher, age 37
Negative—This movie, at first seemed okay, but then, out of the blue, they slipped in constant messages of sensual material inappropriate for small children. I recommend ages 14+ for this one. The camera strayed to private sections of the body way too many times. This movie was one step above PG-13.
My Ratings: [Very Offensive / 1]

Bobby, age 22
Negative—Although this movie has a PG rating, I thought the sexual content was definitely intended for older kids—and unneeded in this film. There was considerably more offensive language than typical PG kids movies (i.e., “Spy Kids”, “Big Fat Liar”). Also, a fair amount of violence was present throughout—although no graphic blood.

I would definitely not recommend this for kids under 11. Even the movie previews shown prior to the start were for PG-13 movies—despite the fact most of the kids in the audience were under 10. Putting aside the language, violence, and sexual content, I didn’t feel the movie was up to the typical fare presented today like “Spy Kids”, “Big Fat Liar”, and “Princess Diaries”.
My Ratings: [Average / 1]

Diane, age 44
Negative—This movie had a lot of sexual innuendo (x-ray glasses being able to see things, low cut tops, etc) that was not approriate for children. There is also a death portrayed that could be disturbing to small children. At the end we found out Madonna helped produce the movie, which is sufficient enough reason to avoid it.
My Ratings: [Average / 2]

Bryan Bowers, age 32
Comments from young people
Positive—This movie was pretty good, better than the original, the only thing I have against it is that it is so much like the first film, without most of the objectional content.
My Ratings: [Good/4]

Benjamin Layman, age 12
Positive—I enjoyed this movie because it was fun and entertaining, but I was a little surprised at the amount of sensual content that was slipped into the film. Not terrible, but for a kids movie, it seemed totally unnecessary. However, older kids should find this movie thoroughly enjoyable.
My Ratings: [Better than Average / 4]