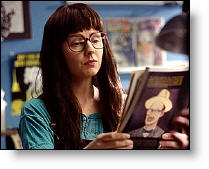 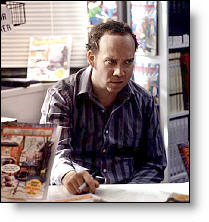 Here’s what the distributor says about their film: Harvey Pekar is file clerk at the local VA hospital. His interactions with his co-workers offer some relief from the monotony, and their discussions encompass everything from music to the decline of American culture to new flavors of jellybeans and life itself. At home, Harvey fills his days with reading, writing and listening to jazz. His apartment is filled with thousands of books and LPs, and he regularly scours Cleveland’s thrift stores and garage sales for more, savoring the rare joy of a 25-cent find. It is at one of these junk sales that Harvey meets Robert Crumb, a greeting card artist and music enthusiast.

When, years later, Crumb finds international success for his underground comics, the idea that comic books can be a valid art form for adults inspires Harvey to write his own brand of comic book. An admirer of naturalist writers like Theodore Dreiser, Harvey makes his ‘American Splendor’ a truthful, unsentimental record of his working-class life, a warts-and-all self portrait. First published in 1976, the comic earns Harvey cult fame throughout the 1980s and eventually leads him to the sardonic Joyce Barber, a partner in a Delaware comic book store who end ups being Harvey’s true soul mate as they experience the bizarre byproducts of Harvey’s cult celebrity stature.

Positive—This movie was a wonderful surprise for me. I saw it on a video store rack, and decided to give it a try. Boy, was it worth it. Before I saw this movie, I had never heard of the comic book “American Splendor” (though I had heard of Robert Crumb, the first artist on that book). I will now be fervently hunting the comic down. “American Splendor” (both the film and the book) take a comprehensive look at the life of one man, Harvey Pekar—and, eventually, his wife Joyce Brabner and, later, their daughter. In recent years, American television has veered wildly towards the voyeristic; “reality television” and such. Call “American Splendor” “reality” entertainment for people with brains. As Harvey says, real life is complex; more complex, in fact, than anything a scriptwriter could dream up. The reason for this is the fact that real life doesn’t necessarily follow a set formula; when reading/seeing/hearing the story of someone’s life, we are constantly met with surprises and unexpected bumps in the road. “American Splendor” celebrates this fact. It revels in the humanity of the real people who’s lives it documents.

It is often grubby and grey, but so is life. This is more real than disgusting, mindless trash like “Fear Factor” or “Survivor”, where people do outrageous things to attain money and fleeting fame, because it shows Harvey and his family going about their everyday lives. Much could be learned by the kind of love shared by Harvey and Joyce in this movie; it’s common, without lots of hearts and flowers and fancy words and long, loving stares into each other’s eyes. Die-hard romantics can scoff all they want; it’s this kind of common, real-world love that pulls them through the horrors of Harvey’s cancer treatment. I assume that the words “Do you _____ take ______ here present to be your lawfully wedded (husband/wife), in sickness and in health, for better or for worse, in good times and in bad, untill death do you part?” were included in Harvey and Joyce’s wedding vows. If so, then they have certainly held to them.
My Ratings: [Good/5]

Siiri Cressey, age 26
Movie Critics
…a celebration of everyday, glamour-allergic people… The movie is based on the comic book of the same name, which boasts Pekar as its writer and subject…

Mark Caro, Chicago Tribune
…If you’re looking to feel good about your own miserable life, well, this is the movie to see…

ScreenIt
…this is a rough grumpy, yet warm portrait of a self-proclaimed pessimist, with a hesitant yet hopeful outlook. And of course, Giamatti’s performance is stellar…

Ross Anthony, Hollywood Report Card
…Funny, poignant and vitally original… offbeat and often in-your-face. It doesn’t try to glamorize or demonize its subject, but simply sets Pekar down, ready-made, with his odd habits and sad-sack demeanor in full view…