for some mild language and innuendo 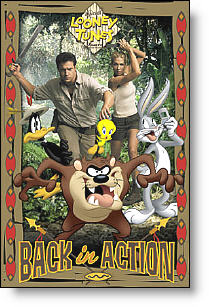 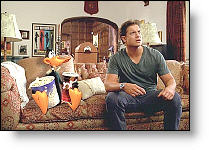 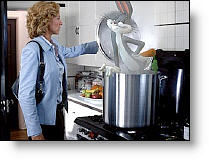 Above: Steve Martin as The Chairman

Back in Action holds true to its promise of action. Although they probably meant “action” as in the filmmaking process, there is lots of human and cartoon action. Accompanying it is violence in the form of fighting, chases, and explosions. The explosions always limited to the cartoon characters. The integration of the cartoons with humans is reminiscent of “Who Framed Roger Rabbit” with only a few interactions that could’ve used some technical improvement.

At Warner Brothers Studio, Daffy is fired by the new Vice President of comedy Kate Houghton (Jenna Elfman). Once again, Daffy has demanded too much of the spotlight for a new production and in the process has dimmed his career. Houghton asks a security guard and yearning stuntman, DJ (Brendan Fraser) to escort the Duck from the studios. Of course, handling cartoon characters is a challenge and needless to see that mass mayhem happens causing DJ to lose his job as well. Too bad that Houghton did not know that DJ’s dad is Damien Drake (Timothy Dalton), the legendary spy actor for the studio.

Meanwhile, the chairman of the ACME corporation (Steve Martin) is plotting to obtain the Blue Monkey diamond, a supernatural device that will transform humans into monkeys and reverse it as well. Only Damien knows the location of the diamond, so the chairman has had him captured and is trying to torture the information out of him.

Damien gets one call into his son (who only thinks he is a spy on camera, not real life as well), and that sets DJ and Daffy on the trek to rescue his dad. So, we are treated to a rousing adventure with some spy gadgets mixed in with loads of cartoon and human clashing—especially since the chairman apparently has several cartoons on his payroll (many more than just Wile E. Coyote—remember all his roadrunner-chasing tools were from ACME). The hunt for the diamond takes you around the world from glitzy Las Vegas to serene Paris to the jungles of Africa.

There is tons of violence, but the cartoons recover quickly from being exploded or even decapitated. Do avoid this film if cartoon violence is unacceptable for your family.

The movie included a “Psycho” shower-scene movie parody with Bugs that could’ve easily been edited out. Further, there are many ladies that are scantily clad at times, from Houghton to a Las Vegas singer named Dusty Tails (Heather Locklear) to other show girls. Daffy whistles at some can-can dancing girls in their dressing room. There is some innuendo going on, most coming from Mr. Chairman. Also, DJ shows his boxer shorts when his flying pants spy gadget misfires.

There are some potentially disturbing creatures (supposedly aliens) that could scare some young children. Note that Dusty says she is a not only a spy but an assassin. Further, the idea of someone getting turned into a monkey could be confusing and frightening.

This reviewer did not detect any major language problems, other than a “My G*d” and “pain in the butt.”

Some positive virtues include the fact that DJ refuses to get a “break” in show biz as a stuntman by riding on his father’s coattails. Of course, the son trying to rescue the father is noble. As usual, saving the world is a worthy aspiration.

There are a few jokes mixed in to make parents chuckle. During a dangerous car chase in Las Vegas, Daffy and Bugs are seen in the back seat filling out their Wills. The ACME board members have hilarious and appropriate names to match their roles.

In summary, “Looney Tunes” provides cartoon fun and is mostly acceptable for families that have no issues with cartoonish violence. Use your discernment for any of the other issues.

Positive—Our family enjoyed this moving. There are times when only the adults will laugh since the movie is packed with references to other movies that the children wouldn’t catch. Also a few social commentaries (Wal-Mart in the desert) that the children may not understand, but my wife and I laughed at. As Mr. Emmerich points out, there is a lot of classic Warner Brothers cartoon violence (but no blood or deaths.)

It is fun to see how all the WB stable of cartoon characters are used in the movie. We spent our evening talking about the movie and I soon realized that each person in our family (Dad, Mom, two daughters ages 6 and 10) referred to a favorite moment that I didn’t remember. We all agreed that there were scenes we probably missed and that a DVD rental was in our future. We talked about good and evil, even as it relates in a cartoon world. While there are humans in the movie, the cartoon characters are the stars.
My Ratings: [Better than Average/4]

Jeff, age 44
Positive—Totally enjoyed this movie. We took my 5-year-old nephew and he liked the funny cartoon stuff, while I got a big kick out of seeing the cartoons I grew up with back the way they used to be. Plenty of things in there for adults to laugh at that aren’t offensive for kids. Yes, they could have done without the sexy spy, but that is only a small part of the movie. Nice to watch a movie and not have to cover up the little one’s eyes or ears because of what is on the screen.

Definitely will have to watch it again to catch all the things I missed the first time.
My Ratings: [Better than Average/4½]

Cathy, age 44
Neutral—This movie was very well done. Only a couple things I would comment on. First, Steve Martin was too animated a villain. Secondly, its too bad Mel Blanc is gone. I sure missed his character voices. However, the storyline was good and humorous.
My Ratings: [Better than Average/4]

Jim, age 37
Positive—I saw this movie with my two sons ages 13 and 6. The three of us enjoyed the movie. It was typical looney-toons action, with some adult-focused humor thrown in. Overall, it was light-hearted, entertaining, but nothing I think any of us would see a 2nd time. I do think the animation blending with the human actors could have been better, there wasn’t any “believable eye contact.”
My Ratings: [Better than Average/3]

Jennifer G., age 40
Negative—This movie would have been great, the perfect family movie every Christian parent is waiting to take their family to if they would have left out the Psycho-shower scene and the “scantily clad” more like pornographically clothed human females. Lola bunny would have been a perfect alternative for Heather Locklear’s role and all immodest clothing worn could have been modified that would have added to the film. Very Disappointed.
My Ratings: [Very Offensive/5]

K. Maloy, age 39
Positive—…It was great to see all my favorite Looney Tunes characters. Regarding the “pain in the butt” remark, Porky Pig laments how hard it is for a stutterer to find work. The movie could have done without Heather Locklear’s role and the Psycho-esque shower scene, but overall, a good movie for the family.
My Ratings: [Better than Average/4]

Ron F., age 28
Positive— A decent movie, good special effects, enjoyable, granted it’s not as good as “Who Framed Roger Rabbit” but still a cool movie.
My Ratings: Moral rating: Average / Moviemaking quality: 3½
Jeff Andrew Winters, age 41 (USA)
Positive—This was a good movie reminding me of the old days when cartoons were great and actually funny. I really miss the days of Bugs Bunny, Jabber Jaw, Speed Buggy, the Great Grape Ape and all the cartoons that were …funny and worth watching, not like todays cartoons that are worthless and just not good for Christian families to watch.

This movie was funny, and I loved the adding of all the Warner brothers characters. I had a laugh with Shaggy arguing with Matthew Lillard about his paying Shaggy in the live Scooby Doo movie. This was just full of silly crack jokes and lots of fun. I loved it, although I do miss Mel Blanc; he was the best cartoon voice out there. But the voices for this movie were closer to the original then some of the new Scooby Doo movies (cartoon ones).

The only thing I’d have to complain is some of the girls were wearing some skimpy outfits, but not real bad…
My Ratings: [Good/4]

Jason, age 28
Comments from young people
Positive—The Looney Tunes aren’t at their best here, but this is still much more entertaining than most kids’ movies. Absolutely nothing even remotely offensive here, good for the whole family.
My Ratings: [Good/3]
Kat, age 18
Positive—This is a very funny, humorous movie!! There is several instances where Daffy whistles over pretty girls, and the violence is heavy (but subject to cartoon characters only). One of the only things that some might offensive is a charm—supposed to be supernatural. All in all, GREAT movie!
My Ratings: [Better than Average/4]

Garrett, age 13
Negative—What a waste of my time. They did not need to make this film, they should have stopped at Space Jam…
My Ratings: [Better than Average/1]

anonymous, age 13
Positive—Looney Toons was very good… it had a lot of violence to the toons (Looney Toons style) and had some things that youngsters might not get… I rate it positive. If you want a funny, relaxing night, you gotta see this!
My Ratings: [4]

Garrett, age 11
Negative—This movie from the funny preview looked like it was going to be hilarious, but boy was I wrong!This movie contained CORNY jokes and a even a few rude comments!You should definitely save your money watch the old cartoons.
My Ratings: [Better than Average/3]

Chris Coolnam, age 11
Movie Critics
…The slapstick shtick keeps the kids laughing, while the knowing references and gags that only the grown-ups will get keep us going right along with them…

Melinda Ennis, Atlanta Journal-Constitution
…It won’t make preadolescents forget about SpongeBob SquarePants, but they’ll howl when DJ’s jet-propelled pants take off without him…

Scott Craven, The Arizona Republic
…feels less like a movie than an exercise in brand reinforcement…

Mark Caro, Chicago Tribune
…its ambitious fusion of cartoons and live-action comedy is only fitfully amusing.

Stephen Holden, New York Times
…the leads, Ms. Elfman and Mr. Fraser, as well as most of the other actors, portray clichs with characterizations flatter than Wile E. Coyote after the anvil falls on him…

Nancy Churnin, The Dallas Morning News
…the standout sequence—in which Elmer Fudd chases Bugs and Daffy through the Louvre, jumping in and out of paintings by Dali, Munch and Seurat—relies for its effect on pure imagination.