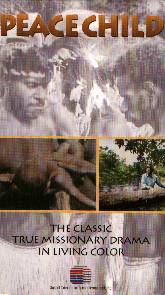 This unforgettable documentary features Don and Carol Richardson as themselves and Sawi tribespeople re-enacting the events surrounding the Richardsons’ arrival among their tribe.

For centuries, the Sawi have lived as cannibal-headhunters, each Sawi village warring with the others. Ordinary murder is nothing to them. To be a “legend maker,” you have to create a special scenario in which you pretend to make peace with someone, then kill him when his guard is down. This Sawi ideal is called “tuwi asonai man” [“having caught a pig, to do…”], which means “to fatten with friendship for unexpected slaughter” as one would fatten a pig. The Sawi have no word for nor concept of God; they believe only in disinterested or malevolent demons and spirits of the dead. When missionary Richardson has learned the Sawis’ language and tells them the story of Jesus, to his disappointment they brighten at the account of Judas’ betrayal of Jesus, and regard Judas as a super-Sawi and as the hero of the story. Richardson feels that he has failed. And his very presence has caused several Sawi villages to come into unnaturally close contact, thereby precipitating constant outbreaks of fighting.

Richardson hasn’t yet found the key to making the Gospel effective among the Sawi, but he announces that he’s going to leave because he’s the cause of the Sawi killing each other. The warriors are distressed at losing the source of their modern medicine and steel axes, so they say they will make peace. In light of the Sawi idealization of treachery, Richardson wonders what possible guarantee there can be of real peace. He soon finds out. The one and only guarantee that all Sawi will honor is an exchange of infants between villages. An exchanged infant is a “Tarop Tim” or “Peace Child.” As long as the Peace Child lives, peace is guaranteed. Although most any other murder is honorable, killing a Peace Child is a despicable act.

This is the key Richardson has been waiting for. As he presents Jesus as God’s Peace Child who will never die and therefore guarantees everlasting peace, many of the Sawi are transformed by the message, and a church is established.

This is a unique story. And that’s unfortunate, because I suspect that there were and are many other tribes and cultures that could have been reached by the same principle of “redemptive analogy” that was used among the Sawi, if the people evangelizing those cultures had taken the time to discover those analogies. The book of Romans tells us that all mankind has the witness of Creation and the witness of conscience. All peoples know that they’re missing something, and their cultural practices reflect that incompleteness in some way.

Content Warnings: The Sawis re-create a sequence from the year before the Richardsons arrived, in which the warriors of one village betray and kill a representative from another village. The killing is off-screen, but attended with special-effects blood. The villagers are also represented as eating the man’s flesh. A full-scale fight between the warriors of two villages is re-created; it’s handled discreetly, but there are many wounded. The Sawi men and women wear only grass skirts, and many of the children go naked.

Positive Content: The principle of “redemptive analogy”—of finding customs and traditions within a culture that can be used to present the Gospel in an understandable and non-foreign way as a logical outcome of what that culture already believes—is the cornerstone of this story. By all means, get both the book and the video. The film, and the Regal/Gospel Light book on which it is based, can be ordered through your local Christian bookstore in either English or Spanish, and may be available in other languages as well.

Comments on the Book: “Peace Child” created quite a stir when first published. It was even the Book Section of an issue of Reader’s Digest. It covers in detail many topics that can’t be shown in a half-hour video. The Sawis’ culture was full of customs disgusting even to themselves. One person could impose his will on another by means of a “waness” bind, in which he made the other person confer ceremonial uncleanness on him and thereby become obligated to do him a favor. Closely related to the “waness” bind was the practice of “gefam ason” (touching the stench), a mourning ritual practiced over dead bodies of relatives. And Sawi boys were deliberately raised not to obey their fathers, because the fathers knew that this “discipline in reverse” would create violent, strong-willed men who would beat their wives, bristle at every real or imagined injustice, and be ready to go to war at a moment’s notice. (Tell that one to Dr. Spock and company.) But Sawi tradition also contained prophecies that someday the Words of “Remon” [Regeneration/Immortality] would come to them. And both Richardson and the converted Sawi discerned that the revolting customs the Sawi practiced were a sincere attempt to reach the fullest measure of collective sorrow, so that the Words of Remon would come more quickly (not materially different from people flagellating or crucifying themselves). Therefore, for those who believed that Richardson’s message was in fact the Words of Remon, the old customs became unnecessary—an old covenant that was now supplanted by a new and better one. The only way to get the full force of this cultural transformation is to read the entire account.

Comments on the use of Redemptive Analogy and Cultural Bridges: The principle of preserving everything that is good and valuable in another person’s culture, and of finding any key within that culture that makes the Gospel more understandable, is perfectly Biblical. The Apostle Paul was well-acquainted with Greek culture and literature; he often quoted Greek authors as a means of bridging the cultural gap or of just “fitting in.” At Mars Hill in Acts 17:22-31 he quoted or alluded to Aeschylus’ Eumenides, Plato’s Republic and Plato’s Phaedo, as well as Epimenides, Aratus and Euripides. By knowing—and by showing that he knew—what his hearers already believed, he was able to relate to them and to lead them from familiar concepts to unfamiliar ones. In Acts 21:39, moments after being nearly killed by a mob, Paul had the presence of mind to get the Roman officer’s attention by again quoting Euripides (“no mean city”). And in Titus 1:12 he again quoted Epimenides of Knossos, a Cretian who had unflattering but true things to say about his own countrymen. This isn’t an exhaustive list. The point is, as a holier-than-thou Pharisee Paul would have been forbidden from reading and studying Greek culture and literature. And Paul claims (Acts 26:5) that he lived as a strict Pharisee until his conversion (no mention of a “wild oats” period in his youth). The only fair conclusion is that Paul began to study Greek culture after his conversion to Jesus! See Paul’s own explanation of his “strategy” in 1 Cor. 9:19-23.

At Spotlight, we attempt to use popular culture—film content—as a means of finding redemptive analogies to make the Word of God more understandable to our readers. People on the more conservative end would not attempt this; some of my Christian friends never even watch movies or TV, much less try to find anything good in them. Then again, there are people who try to find redemptive analogies in “Lord of the Rings” or even in “Harry Potter”, which I personally disagree with as a dangerous practice. Guess that puts me somewhere in the middle. Finding redemptive analogies in a particular work of fiction is optional. Finding them in the actual, deeply-held beliefs of a culture is a common-sense part of effectively winning members of that culture to Jesus.