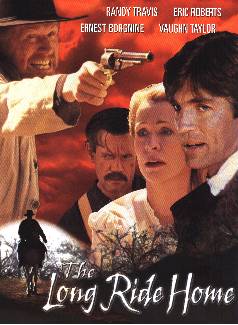 This Western bears no relationship to the classic 1967 Western of the same name. And it has elements not often found in this genre: mystery; mercy rather than straightforward eye-for-an-eye justice; and an Evangelical overtone.

In the opening sequence, a cowboy (Randy Travis) is riding the trail and recalling a prior incident (shown in monochrome flashback) where he was forced to kill a drunken man in self-defense. The other man called him “Jack Cole.” Travis’ character insisted that he was mistaken, but the other man wouldn’t listen. Eventually we learn that the dead man’s family, the Moats, have been hunting “Cole” for eight years and have lost several other family members to his gun. The patriarch, Lucas Moat (Ernest Borgnine), now leads his remaining kin on a last attempt to find “Cole”. So… is Travis’ character really Cole, or not? We’ll have to wait to find out, but let’s call him that for the moment since everyone else does.

Cole is bushwhacked by a rifleman, but rides away, wounded, and falls from his horse near the farmhouse of widow Laura Fowler (Vaughn Taylor, who also wrote the screenplay) and her young son Daniel (Alec Medlock). Though nervous at his presence, Laura nurses him back to health. During Cole’s stay with the Fowlers, Bible subjects and quoted Bible verses come up a number of times. Laura and Daniel know the Scriptures well, as does Cole. On the other hand, Daniel wants Cole to teach him to shoot (not the best role model, perhaps). Besides the Moat gang, Cole is also being pursued by Laura’s boyfriend Sheriff Hank Bowman (Eric Roberts), and by Able Hart (Paul Tinder), a Deputy Sheriff from another county.

I have to avoid any further plot summary, lest I give away the surprises. The story can be confusing for awhile, but it straightens itself out just fine. Besides the principal actors, there’s a small role by Garry Marshall (comedy/drama actor, and director of “Pretty Woman” and “The Princess Diaries”) and a cameo by Stella Stevens.

Content Warnings: There’s a very small amount of language… one d*, some possible “farm language” spoken so softly it can’t be made out clearly, and one interjection of “God” which could be a prayer rather than an expletive. There are several shootings; bullets-thudding-into-flesh special effects are used, but they’re more in the category of kicking up dust than of blood-splatter. There’s also one fistfight, and some angry attitudes between characters. One person is a real sicko; he’s seen knocking Laura unconscious and kidnapping her son, and later attacking Laura again and cutting the buttons from her blouse with a knife (no nudity visible). Some of the acting during the moments of greatest conflict is very restrained—less intense than we’d expect. Since there are several award-winning actors in the cast, and the intensity level is “normal” in other scenes, I have to assume that this is deliberate restraint on the part of the director, in order to create a less scary and more family-friendly product.

Positive Content: The Bible-based theme runs throughout the film. The Scriptures, or Scriptural principles, are quoted and acknowledged by many characters. One person decides to give his opponent another chance, at great cost to himself. Another person, helped by young Daniel, turns to God just before death. There’s no explicit mention of Jesus in that sequence, but it’s still a rare thing to see deathbed repentance in a mainstream film. And there’s another version of this film containing an alternate, even more explicitly Evangelical, take of that sequence.

Once we become accustomed to the old-fashioned, restrained style, the acting is generally very good. The outdoor cinematography and musical score are great. There are original songs written by Travis and others.

This film was released in 2001, but problems arose with the distributor. The producers tell me it should be available again through Lions Gate in early 2003. They also plan to market the version with the stronger ending through an Inspirational distributor.