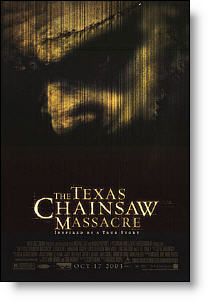 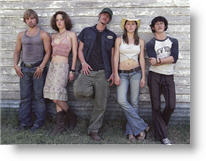 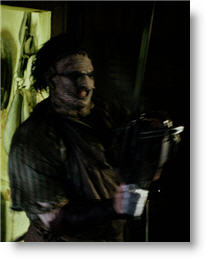 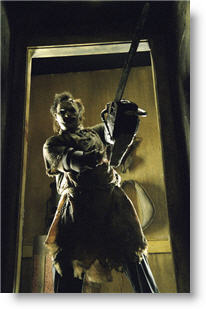 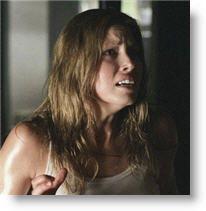 “Inspired by a True Story”

Here’s what the distributor says about their film: “On August 20th 1973, police were dispatched to the remote farmhouse of Thomas Hewitt, a former head-skinner at a local slaughterhouse in Travis County, Texas. What they found within the confines of his cryptic residence was the butchered remains of 33 victims, a chilling discovery that shocked and horrified a nation in what many still call the most gruesome mass murder case of all time. Brandishing a chainsaw and wearing the grotesque flesh masks of his victims, the killer became forever known as ‘Leatherface’ when sensational headlines were splashed across newspapers throughout the state of Texas: ‘House of Horrors Stuns Nation—Massacre in Texas.’

Police and FBI eventually gunned down a man wearing a leathery mask and declared they had their killer and abruptly closed the case. However, in the years that followed, many close to the grisly murder case would come forward to level accusations that police had botched the investigation and knowingly killed the wrong man. Now, for the first time, the only known survivor of the killing spree has broken the silence and come forward to tell the real story of what happened on that deserted rural Texas highway when a group of five young kids inadvertently found themselves besieged by a chainsaw wielding madman who would leave a trail of blood and terror that would forever be known as The Texas Chainsaw Massacre.”

Films in this series:
The Texas Chainsaw Massacre (2003)

Negative—…a total waste of film. I enjoy watching movies, but this one was just plain ridiculous. I tried to make sense out of it, but I found out by the end that Leatherface just kills for no reason. It would give you some resolution if the writers at least gave us a reason to think this guy is a human being. Usually you want your characters to show at least some emotion. I searched to find some rhyme or reason to this movie, but no, it was just a vacuous and horrible film. It lacks any sense of intelligence. Looking for any redeeming qualities? Not here. Looking for some kind of plot, or rational thought? Nope. Not here. But mind-numbing idiocy, it has plenty to spare. I feel like I’ve lost brain cells for paying $6.75 to see this B-movie.
My Ratings: [Very Offensive/1]

Nick S., age 18
Negative—The new version of the TCMs has better produced potsmoking, sex, gore and death than the original—the only thing that’s missing is the horror—not such a big deal if this weren’t a horror movie. This may be a good time to review the legacy of TCM. The original was the first movie produced by Lou Perry’s 1070s production company. Who was Lou Perry? He became a millionaire when he made another 1970s independent film called “Deep Throat.” I don’t think anything more needs to be said about that film, but I would encourage readers to refer to Linda Lovelace’s account of the making of that film—the name of her book is X-Ordeal. Her account of her “performance” in “Deep Throat” and other pornographic films is a real-life horror story. TCM begins with teenagers living the sixties ideal: sex, drugs, rock and roll. It ends with them seeking shelter and finding not peace and love but a nightmare and death. The way Woodstock led to Altamont, the way the gurus led to Charles Manson, the way “Bob and Carol and Ted and Alice” led to “Deep Throat,” we find ourselves at a door which we open in hopes of finding Puff the Magic Dragon or Lucy in the Sky with Diamonds. But on the other side of that portal stands Leatherface, sharpening up his meathooks and revving up his chainsaw.
My Ratings: [Very Offensive/2]

Jim O'Neill, age 50
Positive—If one sees the original 1974 version of this film, they’ll find that this remake is the closest thing to duplication of any true story made in Hollywood. The only difference is that it’s a much more graphic and should not be regarded as something for kids to see. Christians who are also avid horror fans will undoubtedly love TCM. However, if you’re “nightmare” prone after a scary movie, don’t see it.
My Ratings: [Very Offensive / 3]

Edwin Hopkins, age 45
Negative—This remake was just a garbage filled exploitation film while the original TCM was an examination of evil. It was effective in portraying a horrifying environment that was based in reality. The new version is just another gross out talentless attempt to make money. Whether you’re christian or not, this movie isn’t worth watching because its basically dumb and boring and offensive if you’ve never seen a Friday the 13th slasher movie.
My Ratings: [Very Offensive/3]

Dave Moore (non-Christian), age 43
Negative—…a film to shock due to the increasing thrill of seeing on-screen gore. The fact that it was filmed on 16mm added a documentary feel to the production which, subliminally, added to the feel of unrest. Nothing of any moral value can be taken from this film for either a Christian or non-Christian. The viewer is placed into an environment of fear and torture with no real resolve and the overall sensation is decay and death. The storyline (which is nonexistent) will not play on the mind, but several images of perverse enjoyment in slaughtering victims is most unsettling. By today’s standards, the imagery is tame, but that only applies if you expose yourself to today’s standards. On a professional level, the editing never seems to flow freely and any intelligent viewer will soon tire of the handheld camera techniques. Here in England it was banned and given an “X” certificate in London only. Nothing spiritually can be gained from this movie. Avoid it and others of the same type.
My Ratings: [Extremely Offensive/1]

Eddie Smyth, age 41
Positive—Okay, now I’m a christian, and I consider myself to be pretty strong in my faith as well! Yet I do not see one reason to say, “Don’t see this movie!” Unless of course, there are children present, and your scared easily. There is nothing blatantly anti-christian and blasphemous in this movie. The only thing some might find offensive, is the minor amount of drug use, and the occasional course language. First off, you cannot discount the fact that drugs in the seventies were in full swing. And the language is not the blasphemous type, it’s the stuff we’ve heard all our lives that is wrong to say, but is never said in biblical sense is wrong. It is violent, and it is disturbing, but you should have known that going in. I liked it, because I like scary movies. And these days it’s hard to find one that doesn’t involve satanic notions. If you can handle a nightmare or two, see it…
My Ratings: [Better than Average/5]

James Green, age 23
Negative—The movie title explains its self; its just a horrible massacre. The acting was terrible and the whole movie is just blood gore and violence.Im not talking about jump out of a corner scary I’m saying the whole movie is about these people who are trying not to get chopped up into little bits by this guy with a chainsaw. I understand this is a true story, but come on do we really need to no about some people who got trapped in a house getting murdered with a chainsaw?
My Ratings: [Extremely Offensive/1]

Nat M., age 22
Comments from young people
Negative—This movie was all violence, lots of blood and guts. NOT for children. It was a terrible movie in terms of morality. I found it depressing. It scared the life out of me. In the end the bad guy wins.
My Ratings: [Average/3]

J. L., age 15
Positive—I’m not just going to say this film was good because of the gore or anything like that. I really liked the movie, it really hit me. You could never really see how much the real victims were put through or how they suffered. But this movie, it gave me chills, though it was just a movie, I can’t imagine ever going through something like that. I would not recommend the movie for people who get extremely offended… Though there are some mistakes in the movie, it was extremely realistic. You can’t deny that it really did portray to some percentage, the fear, the pain. If it was exactly like what had happened, don’t ya think many, many people would be literally getting sick because of it. Anyway, I loved the movie…
My Ratings: [Good/5]

Amanda, age 16
Neutral—The movie wasn’t that good. A lot of my friends said that it was the scariest movie they’ve ever seen. But I didn’t think it was scary at all. The only thing that scared me was knowing it was a true story, but other then that, it wasn’t scary.
My Ratings: [Better than Average/2]

Debie, age 15
Positive—…the events in this movie never happened; in fact, the movie is very loosely based on the Ed Gein murders that happened 60 years ago. The first TCM was just the simplistic thought of the Gein murders along with a chainsaw, a couple of teens, a dysfunctional family, and the whole state of Texas thrown into a melting pot making a cheap and occult film classic, However, you must give the new film credit for taking a in-depth look at the madness of the Gein murders which had no explanation or reason. This film is only stupid and pointless to the untrained eye which is blinded by all the violence and grouterguske special effects, but if you see the forest for the trees you will be aware of the many references and explanations that are in the movie such as cannibalism, incest, matricide, homosexuality, and many other kinds of sick and disgusting ideals that plague this world.

This film has taken many of the evil elements in this world in put it in a small community. The film has also put a clever twist on its characters by killing off the characters in an order that is very unpredictable and also by making their decisions and actions in the movie understandable and believable. I think the film frighteningly portrays the evil and madness in the world.
My Ratings: [Average/4]

Red, age 15
Movie Critics
…Vile, ugly and brutal. There is not a shred of a reason to see it…