for action violence and some crude humor 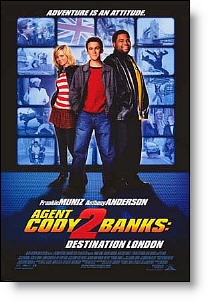 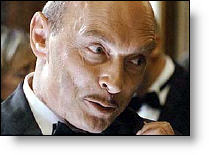 Believing they are providing their son Cody (Frankie Muniz), with a traditional summer vacation at Kamp Woody, Cody’s parents (Cynthia Stevenson and Daniel Stevenson), along with his younger brother Alex (Connor Widdows), unknowingly send Cody to a covert CIA spy training camp. The kids at Kamp Woody learn about explosives, weapons, and self-defense instead of swimming and canoeing.

During what seems to be a routine simulation drill, Cody helps his instructor, Victor Diaz (Keith Allen), escape by helicopter. Not until after Diaz’s escape does Cody learns from the director (Keith David), that the attack was no simulation, that it was indeed a real attempt by the CIA to catch the “good guy gone bad” villain. Diaz steals a top secret mind control software program with the intention of taking over the world.

To catch Diaz, and retrieve the mind control program he stole, Cody travels to London to meet up with and hopefully capture Diaz and his partner in crime, researcher and scientist, Lord Duncan Kenworth (James Faulkner). Disguised as a gifted clarinet player from the United States, Cody enrolls in a youth orchestra run by Kenworth’s wife, Josephine (Anna Chancellor). The only problem is that Cody cannot play the clarinet, a fact he confesses to the CIA. Nevertheless, the CIA provides Cody with a preprogrammed Clarinet, guaranteed to cover up his lack of talent, as well as a few other “Bond-like” spy gadgets, and, of course, a partner.

Cody teams up with Derek Bowman (Anthony Anderson), a bumbling CIA agent who happens to be on probation. Cody and Derek, along with additional help from another spy youth from British Intelligence, Emily (Hannah Spearitt), share a multitude of action packed adventures together and save the world from the evil plot of Diaz and Kenworth, to control of the minds of the world’s leaders.

For the most part, “Agent Cody Banks: Destination London” is a “kiddy” spy spoof film. You won’t be hearing this film mentioned at the Academy Awards Ceremony next year, but for sheer entertainment purposes, I find it satisfactory. Like many films made for children, the expressions and actions of characters are over exaggerated for easier interpretation among a younger audience.

The cinematography falls short as well. During one particular chase scene, the camera switches from one character to another, making it difficult to determine who is chasing who. Nevertheless, my children looked past the film’s shortcomings and enjoyed it thoroughly.

As a parent and movie critic, my job is to reflect on the film’s content and report to you, the reader and potential movie viewer, any questionable incidents within the film that might affect your family viewing decision. For more convenient reading, I will use subheadings to discuss the issues of violence, language, crude humor and attitudes.

Violence:
Although viewers see no blood or killing, there is a good bit of fighting. However, the fighting is not graphically realistic. In one scene towards the end of the movie, for example, Cody and Diaz fight in the Queen of England’s gift room. Many items on display crash to the floor, and viewers see the characters fighting, but the camera moves around quickly without stopping to focus in on the actual punches.

The villains, in another example, use some sort of spray to knock out Cody, the President, and other victims before implanting the mind control devices in their teeth.

Cody slaps Derek in the face, during one scene toward the end of the film, in order to remove the mind control implant from his mouth.

There are more than just these three incidents of violence, but since the other examples are similar to the ones I mention above, suffice it to say that the film contains violence of a non-graphic and unrealistic nature. In fact, the fighting scenes result in no real injuries. Fighting, though it is seen throughout the film’s entirety, is bloodless and exaggerated to identify clearly the heroes of the film.

Language and crude humor:
The film uses a mild amount of crude language. Derek coughs, in one instance, and mutters the word “jackass.” My children did not notice the explicative, but I heard it clearly. I wonder why the word was even included since Derek tries to disguise the word under a coughing sound. It serves no purpose.

Cody’s younger brother, Alex, calls Cody a “whack job” and suggests trading his brother in for a “hot chick.” A man from the music hall tells Cody to “Haul some ass and get to class.” Other words or phrases such as “Suck,” “Limey,” “Bonehead,” and “Screwed up” are also used. The phrase, “what in the hell.” is used once and the Lord’s name is used once in vain.

As for crude humor, Kenworth passes gas in an elevator. Emily says “Don’t get your knickers in a wad” to Cody, and Cody slings food at the other students during dinner one night. I don’t find these things particularly appalling, just juvenile.

Attitudes:
Despite the violence, mild language, and crude humor, the attitudes portrayed within the film bother me the most. The British characters, with the exception of Emily, are largely stereotypical of 19th century personalities. The other children in the youth orchestra, boys and girls of different nationalities, are stereotype characters as well. The young boy from Germany looks like an Arian prototype, and the girl from India is “dingy.” Even Cody’s parents appear naïve and stupid as they head back home after Parent’s Night feeling good about leaving him at Kamp Woody.

Perhaps the stereotyping is simply exaggerated to distinguish the characters more clearly, but it seems that Cody and Emily are the only “cool” characters in the film. Clearly though, the adult characters are buffoons.

In the beginning of the film, Cody trusts Diaz, his leader and teacher. Diaz betrays Cody and eventually tries to destroy him. A troubling line in the film occurs when Diaz tells Cody to trust no one, that “trust equals death.”

Along with the above issues, I think it would be wise to discuss with your children the overall reality of the film. Would the CIA even hire a young boy to travel overseas and risk his life to bring a criminal to justice? I think not. Additionally, is it true that we can trust no one? Again, I think not.

Although my children enjoyed the film, and did not hear or understand the offensive language and crude humor, I advise you to discuss the film’s subtle motive, to undermine adult and parental authority, with your children. Many films today reverse the role of parents and children; it is popular to portray adults as child like and the children as adult like. Encouraging our children to take on adult roles as they rebuff parental authority can only lead to poor decision making and painful consequences.

If your children understand the distortion of biblical reality offered by the film, “Agent Cody Banks: Destination London,” then you can most likely enjoy watching this “kiddy” spy spoof as a family.

Positive—Parents, use your own judgment. You know your kids. I enjoyed the film, but will not take my 9 and 11 year old to see it. I feel it wasn’t very honoring or respectful to parents or adults in general. Cody is very smart and allows it to get in the way of treating several adults in the movie with respect—not the kind of example I want my younger kids to be influenced by. My 12 year old would be able to discern and choose correctly, however, especially with a discussion about it beforehand. I was VERY pleased that there was very little, if any, sexiness in the film. That was a problem in the original Cody Banks movie; I didn’t allow any of my kids to see that one. I would rate it PG-13.
My Ratings: [Better than Average/3]

Diedra, age 39
Negative—I didn’t object to this film too much from a moral point of view, there were a few objectionable things in it, but it was better then average. Nor did having a 16 year old boy …be disrespectful to adults bother me since the only adults I recall him being disrespectful toward were the bad guys who had earned no ones moral respect. It didn’t bother me either that he decieved his parents since it came across to me that he was trying to keep them from worrying more then being deceitful out of disrespect. After all, a 16 year old is certainly not an adult, but neither is he a child anymore either and Cody, like many brave teenagers in American history, was trying to serve his country which is an admirable cause. What bothered me about this film is that it was ****horrible****!!! …this was a bad movie! My 9 year old enjoyed it, something that has caused me to question her taste (just kidding) and Frankie Muniz did a good job with what he was given, but everything else, the acting, the story, the fight scenes (except for the first one in which Cody unwillingly helps the bad guy get away), I mean everything was just bad, bad, bad. I thought the first Cody Banks film was pretty good in a light James Bond escapism film sort of way, but avoid this second one at all cost! Ugh.
My Ratings: [Better than Average/1]

Eddie Hodges, age 47
Comments from young people
Positive—I think this movie is very good.It is a good action movie.It has lots of fighting in it
My Ratings: [Average/4]

Josh, age 13
Positive—I liked the movie as far as kid CIA agents. I think, depending on the circumstances, that any child above the age of ten, who understands that they should respect their elders should see it. It was very humorous, but if you do not encourage sexual music, then you should know song called “Right There” by Chingy is played when Derek explains how he designed this car himself. he calls it “the baddest system in London” and then the song plays a little. When Cody turns it off, he turns it back on. But overall, it was a great movie and I would see it twice if I had to.
My Ratings: [Better than Average/4]

Taelor, age 13
Positive—It was an okay movie. It wasn’t bad. It had some crude humor. It was okay for kids to see. Why take your kids to go see an (R) or (PG-13) movie when there’s a movie that’s PG (not to bad) sitting right in front of your face. Enjoy…
My Ratings: [Excellent!/2]

Ashley, age 12
Movie Critics
…creatively Banks-rupt… In terms of inspiration or even the slightest shred of ingenuity, Banks ranks more like an 000 than an 007… flimsiest of heavily worn spy-movie cliches…

Michael Rechtshaffen, The Hollywood Reporter
…full of chase sequences and comic battles, but [Director] Mr. Allen’s work is compromised by an apparent inability to match his shots in a spatially coherent fashion. It’s never easy to tell who is chasing whom and in which direction, a needless confusion that dampens many of the thrills and scuttles quite a few gags…

Ellen A. Kim, Seattle Post-Intelligencer
…I’ve been trying to mind-control myself into the head of a kid the right age to enjoy “Agent Cody Banks 2: Destination London,” but either I was never that age, or I haven’t reached it yet…