for some mild thematic elements 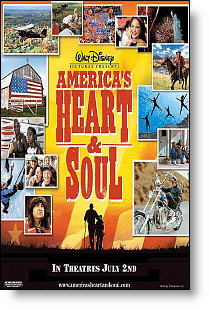 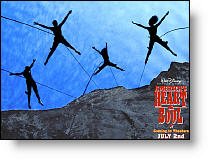 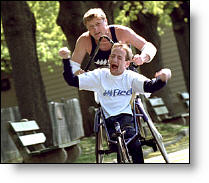 Does being a Christian mean that I should be patriotic? Answer

What role should the Bible and Christianity play in America? Answer

Social Issues and Government—Answers to Frequently-Asked-Questions

Here’s what the distributor says about their film: “America is a vast country—three thousand miles from end to end. But it’s not the land that makes America so special—it’s the people. Filmmaker Louis Schwartzberg packed up his camera and hit the road, with a goal of capturing both the unparalleled beauty of the land and the incomparable sprit of the people. Through his movie, ‘America’s Heart and Soul,’ you’ll have the chance to meet ordinary Americans with extraordinary stories. Louis’s gift is his ability to connect with people, honestly capturing their values, dreams, and passion in an awe-inspiring journey that reveals the stories—unusual, captivating, inspiring and emotional—that make us into something more than a collection of individuals. ‘America’s Heart and Soul’ is a celebration of a nation told through the voices of its people.”

“America’s Heart and Soul” will revitalize your mind and invigorate your spirit. A tapestry of the United States of America, this film highlights the physical landscape of this country, but more so the unique individual people who make up its fabric. Watching it, you can’t help but think on things that are pure, admirable, excellent and praiseworthy.

Long time cinematographer and first time director, Louis Schwartzberg has created a mosaic that he calls “a larger profile of the American character.” After filming over one hundred people’s stories over many years, a final composition of twenty-eight accounts have been woven together accentuating core values of our nation, such as freedom, family, and faith. Diverse in more aspects than region, ethnicity, gender and age, each encounter is a distinct taste of the genuine goodness that exists in this country.

Although four minutes is the most time we have to acquaint ourselves with each character, we are able to endear ourselves to them and capture their very essence. Cowboy Thomas “Rowdy” Bush rides horses in Colorado and divulges about his previous bout with alcohol. Sober, he sees alcohol as an unnecessary vice and exhorts us to cherish our freedom. Southern black woman Mosie Brooks proclaims she is a “Child of the King” and “caught up in the Spirit” when she sings with her Gospel choir. And in the quiet hills of Kentucky, a woman weaves as her husband farms, and says the word “poor” is not in her vocabulary. “I’ve been broke, but not poor.”

In an interview, Schwartzberg explained to me that this film is not just a blender of random, fragmented stories. He sees them as individual stories that build together expressing themes such as freedom, family values, work ethic, passion, eccentricity, going for your dreams, and redemption. There are also bits of humor included with outlandishly decorated cars and a guy whose therapy involves shooting food and blowing up televisions. A display of talent is also involved, with one in particular exhibiting Latin Salsa dancing.

As with Mosie Parks, there are many instances where certain characters express their faith in God. A grape grower feels that being in the middle of his vineyard puts him in God’s glory, and goes on to mention Jesus first miracle of turning water into wine. Another man is an ex-con who became a successful boxer and now helps out other young men. And a pastor in California at Glide Memorial Methodist Church (which feeds a million people a year) expresses his vision of getting people to live together and love each other.

Being a professional cinematographer, the pictures Schwartzberg has captured are amazing—both with scenery and with the naturalness breathed out by the people. He credits God for the wonderful footage he was privileged to get. “What are the odds that I would have all the assets in place at the right time, at the right moment, and then for God to show His beauty? What are the odds? I always feel because I’m there honoring God, it’s going to bestow goodness.I’m there to honor it.I’m not the creator.”

This film is clearly not a “talking heads” movie. Although it is all about people sharing their lives, a lot of their talking is done in voice-over while we see them at work or in other activities. There are many more exciting, inspirational true stories, such as a bicycle messenger riding through downtown New York City, a female stunt-flyer pilot, and a physically challenged man hiking Mount Everest. All in all, it is visually and emotionally captivating.

In the midst of swimming pools and backyard barbeques, make sure you make time for “America’s Heart and Soul.”

Positive—This is one of those rare films that come along, make you proud to be an American. Reminds you of the freedoms we have. Because it moves very quickly from subject to subject, it is not a typical documentary. I love the western USA landscape; it makes one feel free and alive! This is a movie you can take children of any age, your parents or even you grandparents! This movie show what makes this country so great by its diversity.
My Ratings: [Excellent!/4½]

Les Jennnings, age 58
Positive—With the exception of Roudy riding his horse into a Telluride, Colorado, bar, I highly recommend this film. Clearly, the man who developed the film must have some personal Christian leanings as he felt no need to balance Christianity with other religious viewpoints. The Gospel singer and the man with the vineyard give great testimonies.
My Ratings: [Excellent!/5]