Benji: Off the Leash!

for thematic elements and some mild language 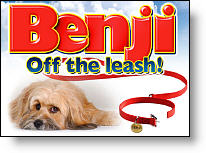 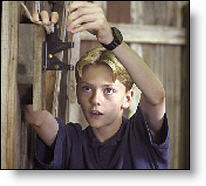 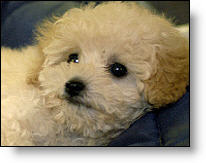 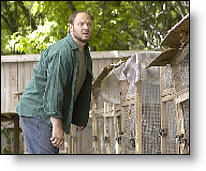 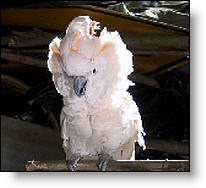 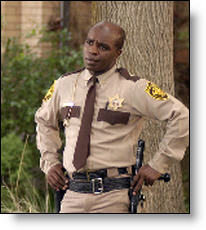 “Rules are made to be housebroken”

Here’s what the distributor says about their film: “Benji is out to bust the system because some things are just not right. This is a story about heroes. Three unlikely, unsuspecting souls who come face-to-face with that moment in their lives when they must stand and be counted. For Sheldon, it’s difficult because he doesn’t appear to be the brightest guy in the world (although he might be the funniest). For Colby, it’s even more difficult because he’s only 14 years old, and up against enormous odds.

For Benji, it’s almost impossible… because, after all, he’s just a dog, lost and alone, with nothing but a belligerent bird and a bungling stray mutt to help. A band of unlikely comrades, brought together by the least likely of the bunch, for a common, courageous purpose. Things will change. Lives will be saved. Because Benji is off the leash!”

If you purchase tickets to this show expecting to see a film of the same caliber that we enjoyed in the Benji movies of the 1980’s, you may be disappointed, as I was, in this poorly executed attempt.

The movie begins as “Benji” is born to a dog owned by the Hatchet family. Mr. Hatchet is a harsh, cruel man who owns ten dogs for breeding stock. His son, Colby, does most of the care-taking for the dogs. Colby is tenderhearted and kind, doing his best to protect the dogs from his father’s abusive behavior.

Young Benji is part of a litter of mutts born to a rare, prized breeder. His litter-mates all look like their mother, but Benji is obviously not purebred, so Mr. Hatchet tosses him aside and leaves him to die. Colby secretly rescues the pup from his fate, hiding him away in his secret fort where he also keeps a pet macaw.

Benji has several mini-adventures as the story proceeds. He fraternizes with a stray dog who is constantly stalked by Animal Control. Unlike most canine-starring flicks, the Animal Control and Humane Society are not presented as the “bad guys.” Their job to protect animals and people is fairly and accurately portrayed.

There are many slow spots throughout the film, several scenes that are repetitive, and only a few laughs. I heard two children from different families asking, “Is it almost over?”

I was disappointed to learn that the villain in this film is the father. As the story unfolds, we learn that Mr. Hatchet is physically abusive to his wife and son. There is a scene in which he appears ready to strike Colby, and Mrs. Hatchet steps between them. Also, Colby jumps on his father’s back, preventing him from harming a stray dog, and Mr. Hatchet angrily tosses him to the ground. At the end of the film, Mr. Hatchet is incarcerated when police find a bruise on Mrs. Hatchet’s head. We don’t hear the conversation, but watch as Colby apparently tells police about his father’s abusive behavior. Not exactly a “happily ever after” ending that kids can appreciate. Many small children would be disturbed and frightened by seeing a parent portrayed in this way.

The acting is poor, and the script was written in such a way that the dialogue seems forced and unnatural. By far the best players were the dogs. The direction has an obviously amateurish feel, and some of the camera angles are frustrating because one can’t tell what’s taking place in the scene. The quality of this film better suits a direct-to-video flick.

Joe Camp, who has written, produced and directed this latest Benji adventure, proudly trumpets that, unlike most Hollywood productions, his film is not “…full of poop jokes, sexual innuendo, gratuitous violence, and gutter language.” I applaud Mr. Camp for striving to create family-friendly entertainment, and in that spirit I happily paid to support this effort. I hope that a message will be sent that there is indeed an audience ready and waiting for something clean and wholesome to enter the theaters. Unfortunately, the quality of “Benji: Off the Leash” is so poor, it may leave some audiences more sure than ever that some amount of sex, language and violence are just necessary evils in order to watch a well-made piece.

Positive—My husband, daughter and son-in-law and their three sons, 9,6,3, all enjoyed the movie immensely, as did I. It was a beautiful “love” story of a boy and dog who both had perseverance.
My Ratings: [Excellent!/5]

Carlana Lane, age 66
Positive—I just took my two kids, (ages 4 and 5), and they both loved it! (I enjoyed it too!). However, I would caution any parent not to bring their child if they cringe at any form of violence, however mild or implied. I would not recommend this movie for the sensitive child that is real young and undiscerning. You do get a Christian World view expressed by the charactor Mr. Finch as evidenced by the fact that he shows kindness, paraphrases the Bible a little, and expresses peristant and patient quality of love. There is mild humor in the movie to add a needed contrast against the mean father, Mr. Hatchet. Go see it!
My Ratings: [Better than Average/3½]

Cory Briggs, age 47
Positive—…I agree with the reviewer—compared to the moviefare of today, this one is very slow. The action is not even as captivating as the original Benji movies. Yes, I did find this disheartening. Not for myself, though, as I rather enjoyed a nice kick-back-your-heals-and-relax movie. Rather, I knew this would discourage moviegoers and send Hollywood the wrong message about the movie. On the positive side, a gentle elderly man in the movie quotes Scripture with regards to repentance (in response to the dog stealing his food!), right is portrayed as right and wrong as wrong.

Proverbs 12:10—A righteous man cares for the needs of his animal, but the kindest acts of the wicked are cruel.

All in all, would I encourage folk to bypass this film or wait for the video due to its disappointments? Well, I personally made the choice to put my money where my mouth is—and if I must sacrifice a few bucks to see a poor quality film to send a message to Hollywood that decency belongs in the movies, then so be it. The choice is yours.
My Ratings: [Excellent!/2]


Deanna Marquart, age 33
Neutral—I heard part of a radio commentary, which I think was with Joe Camp, that led me to believe this would be a triumph of theatre films for families seeking wholesome entertainment. The audience was strongly encouraged to show Hollywood what America wants with their theatre attendance. I took my wife and four kids (5,8,8,10) to see it, not expecting a spectacular show—and it was not. The normal goofy characters (animal control), and some neat stunts with animals were entertaining for all. In the end I was very disappointed that the family was “saved” from the vilified father figure, leaving a broken family—but the dog had a bright future as the new “Benji.” Frankly, I am tired of these cheap shots taken at the family figure heads, for the purpose of creating a commonality of dislike for the audience. I applaud the efforts of little violence, promoting the idea that no one is helpless, and sexual purity—but really I could care less what happens to the dog at the end versus the family. I can easily envision an end where the father is brought to repentance—no matter the fate of the dog—which would have left me highly promoting the film.
My Ratings: [Average/2½]

Jon, age 29
Negative—After reading Joe Camp’s “Note to Parents” about his new Benji movie, I was so excited that I wanted to call and email everybody I knew to tell them to go see this movie on opening night. Finally, I thought, a REAL family movie from a Christian man with children and a heart to protect others. Well, not so fast. I was shaking my head and ready to leave in the first 2 minutes. First red flag—rated PG. I couldn’t believe it. I felt conned. Then, $35 (including popcorn) to see an angry abusive father scream at his family, knock his son on the floor, hear “get Daddy a beer,” “shut up” numerous times, “I swear,” grownups calling each other “stupid,” the word “butt” too many times to count, and seeing a Dad asking his son to lie to authorities, and ultimately being taken in for abuse. It absolutely wore me out, and I apologized to my 5 year old in the parking lot, explaining that Mommy thought this was going to be a good movie for all of us to see together, but that I had made a mistake.

Sure, the movie was better than most in the way of nudity and profanity, and my children (ages 5 and 2) watched and were entertained most of the time, but it was certainly not my idea of a Christian family film. In short, I trusted Joe Camp in his claim of what the movie would be, and was greatly disappointed. Obviously, I wouldn’t recommend the movie.
My Ratings: [Average/3]

Terry Tann
Comments from young people
Positive—It’s s very cute movie, one of the few this year that was a good movie for young children to watch. While the movie-making quality was not the best, the story-line was cute and there were no profanities. The only thing I saw that might disturb kids is the fact that the father in the movie abuses animals and his family, but the story ends on a positive note, the villian is made acountable for his actions and the animals (And people) whom he harmed are taken well care of. It’s not a very intelligent movie, but it’s very cute and clean. Over-all a very good movie for kids.
My Ratings: [Good/2]

Amy, age 16
Negative—I saw this movie thinking it would be okay, but it was sooooooo slow. I don’t think I will want to see this again. Shaggy and Puppy kept running away and going back home throughout the whole movie. It repeats itself entirely too much. It really has nothing to do with Benji at all until the very end when Puppy becomes Benji. I thought it would be a continuation of the first one, it was just a whole new Benji.
My Ratings: [Good/3]

Tarah West, age 12
Negative—When my parents went to take me to this movie on my last day of summer break, I was feeling quite down about going back to school and needed a good, old-fashioned flick to cheer me up. That isn’t what I got with “Benji: Off the Leash!.” About 90% of the time, I can find a good Hollywood-made movie that I can enjoy. About 0% of the time I can find a good FAMILY-targeted film that I like. I think you get my drift. You see, when most Hollywood moviemakers are making a movie, they’re striving for QUALITY. When most family movies are being made, they’re just striving for “no cussing, no sex, no violence” and “no quality.” They go so far with it, they’re working more on the film’s censorship than its entertainment-value. Back in the good, ole’ days when the original “Benji” movies were being made, filmmakers strived for BOTH. Now that’s how it should be… This movie was boring, and I only discovered the plot when the whole film wrapped up. Bottom line: “Benji: Off the Leash!” is the kinda’ movie that is for the dogs…
My Ratings: [Good/1½]

David, age 14
Movie Critics
…engaging …well-paced storytelling… unashamedly praises the virtues of friendship, loyalty and sacrifice without wallowing in the bathroom humor and cut-rate crudities that have become commonplace…

Leonard Maltin, Hot Ticket
…If you want to raise humane, ethical kids, take them to see this movie…