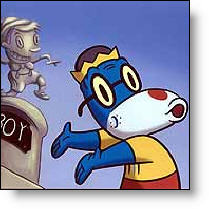 Released by Walt Disney Pictures—This is traditional animation, not CGI. It is the story of a dog, Spot (Lane), that is so curious about the world that he has taught himself how to read, and sneaks to school with his master, Leonard (Flemming), where he poses as a human, Scott, so he can expand his awareness and education. Based Upon the Emmy Award-winning Saturday morning animated TV series “Teacher’s Pet” that aired on ABC for two seasons (2000-2002), and is now aired as repeats on Toon Disney in the 2002-2003 season.

Comments from young people
Positive—It was a good movie, a little too musical for me, too many songs. But, the plot was O.K., except for the address of the evil scientist guy, whose address was 666, meanings they are referring to the mark of the beast. This may just be pointing out that the evil scientist is evil, or that they thought it was funny, or some other reason, but it should not be in a kid’s movie like that, funny or serious.
My Ratings: [Better than Average/2½]

Ty Burr, Boston Globe
…the story is lame and the dialogue no better… Too many of the jokes are above the heads of kiddies and beneath the contempt of adults—in either case, nobody’s laughing

Rick Groen, The Globe and Mail
…takes a strange detour that will leave kids bored and parents scratching their heads…

Kathy Cano Murillo, The Arizona Republic
…It seems like a bizarre move for Disney, releasing a film that combines elements of “Blue’s Clues” and “The Island of Dr. Moreau.” The result is nowhere near disastrous, but …may seem more delightful to marijuana smokers than moviegoing children…

San Francisco Chronicle
…a twisted take on Disney’s own Pinocchio property, Spot gets his chance (sort of) in an all-singing, all-dancing, too-short extravaganza… propelled by 11 songs and a swirl of inspired animation sequences…

Robert K. Elder, Chicago Tribune
…has a few questionable elements, but its encouraging theme is that everyone needs a friend and every boy needs a dog…

Brian Hughes, Preview Family Movie and TV Review
…too many negatives-including the whole premise of changing species-cloud the message…