for strong sexual content including graphic dialogue, a rape and language 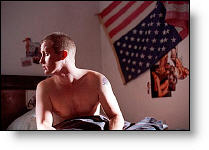 Read stories about those who have struggled with homosexuality—GO

What does the Bible really say about homosexuality? Answer

What about gays needs to change? Answer (It may not be what you think.)

Teens! Have questions? Find answers in our popular TeenQs section. Get answers to your questions about life, dating and much more. GO

The word “mudge” doesn’t exist—except that it is part of a similar word “smudge” meaning “a dirty mark or smear.” This definition may describe our protagonist who travails through a painful loss, plunging him into difficulties with his masculinity and with homosexuality. “Mudge,” however, is the boy’s last name, and in a strange way he comes clean in this curiously redemptive story.

Adolescent Duncan Mudge (Emile Hirsch) has recently lost his mother and now lives alone with his father, Edgar (Richard Jenkins), with whom he has no emotional connection. With neither of them recovering from the recent death, Duncan tries to recapture what life was like with his mother, including imitating her at the dinner table, befriending her favorite chicken, and wearing clothes she left behind. As Duncan’s relationship with his father complicates, a friendship with his neighbor, Perry (Tom Guiry) emerges, giving him needed emotional support. But this relationship is eventually complicated, too, after an extreme erotic encounter, leading them both to deal with the issue and to Duncan’s decision to embrace his masculinity.

While not seeming to be exploitative, this film does not shy away from depicting extreme situations. The most graphic is the sex scene between Duncan and Perry, which could be considered a rape. There is also another sexual scene with Perry and another girl, as well as an explicit, detailed story told by Perry about a sexual experience. Foul language is used at various times, and there is a party scene involving alcohol and drunkenness. What comes across is not some sort of aggrandizement of these situations, but an honest, brutal attempt to show how these things happen. This movie is caged, but not tamed.

Duncan’s story could be a case study in how a young boy could come into a life of homosexuality. Throughout the narrative, we discover that Duncan had a strong connection with his mother, while we also see the troubled one he has with his father. Practically alone in this small town, the only one who continues to affirm him is the neighbor boy, Perry. Perry repeatedly goes out of his way to stick up for Duncan in social settings, even though when they’re alone Perry sometimes considers him a little weird. In these circumstances, Duncan develops an attraction to Perry, and although Perry is not a homosexual, the two end up engaging in a short lived physical relationship.

While this film may be perceived as one that affirms homosexuality, the end of the film may be seen to contrast that. It may instead be seen as a coming of age film for a young boy struggling with identity issues. Duncan’s final decision is clearly a masculine choice, which follows with reconciliation with his father. The twist is how Duncan needs male affection and “acts like a girl” (according to Perry), but Duncan’s final choice is one that no girl would do—let alone most guys. His choice also leads to the emotional connection with his father that he has not received. This film is certainly sensitive to anyone who has struggled with homosexuality, but it ultimately offers a greater hope than succumbing to its ways.

Spiritually speaking, the events of this story prove to be a great analogy of what all of us really need, namely that intimate, personal connection with a father. Unfortunately, a father figure (or any older male role model) may not be available to us, but thankfully, there is a Father in heaven who loves and cares for us more than any Earthly man. He longs to reunite with us and receive His love and all of the other great things. He can be found through the only perfect man who has ever lived—His Son, Jesus Christ.

Discover for yourself the overwhelming message of HOPE that God brings to man—presented chronologically from the foundation of the world to our own time. Watch it on-line—a beautiful, full-length motion picture: The HOPE.

After the screening, I discovered that the director of the film was also in attendance (it was opening night) and I had an opportunity to speak briefly with him. I complimented how well the film was made, including the compositions of the shots and the effective music. He explained that they really didn’t have a lot of money to make it. I was not surprised, but I was very impressed with how well they did it, considering what little funds they had. The script, acting cinematography and everything else were excellently crafted. Although it was very simple, it never came across as low budget.

Tom Guiry and Richard Jenkins give highly believable performances, and Emile Hirsch does well with his complicated role. Aside from Duncan, there are also some touching moments with the father that show how he struggles with the loss of his wife. If nothing else, this movie does a great job at getting us to sympathize with these people and their struggles.

If you’re not ready to deal with the extremity of these kinds of issues, it might behoove you not to attend. But if you have been through these struggles or want to learn the reason behind various choices people make—and get you to really think about them—then you may want to be challenged in this kind of cinematic forum.

Boxoffice Magazine
…Though more offbeat than it needs to be, Boy takes an unflinching look at a gentle spirit trapped in a macho, violent world…