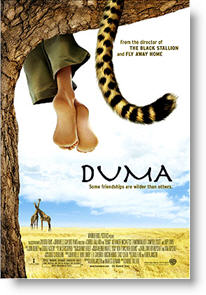 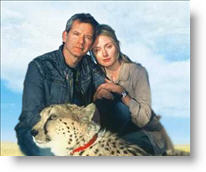 Adventures in the rainforest! Learn about the Creator of the universe by exploring His marvelous creation. Fun for the whole family with games, activities, stories, answers to childrens’ questions, color pages, and more! A popular Christian education and evangelism resource.

“Some friendships are wilder than others.”

Duma is an expertly told and photographed coming-of-age film created by director Carroll Ballard (“The Black Stallion,” “Fly Away Home”). If you’ve seen any of those films, then you already have a good idea of the plot for this new film. Substitute a cheetah for the horse in Stallion, and you have “Duma.”

This is not meant to suggest that “Duma” is boring or predictable. It’s fascinating and brilliant—an adventure in stunningly beautiful locations where you’ll face dangerous crocodiles, wild boars, lions, and many other African residents.

The story begins with a young man named Xan (Alexander Michaletos), growing up on his family’s farm in South Africa after he and his father take in a new pet—an orphaned cheetah whom they dub Duma. As their “pet” grows up, Xan’s father makes it clear that they will one day unleash Duma to live among his own kind. Interestingly, he also draws a comparison between both Xan and Duma, stating that they can no more hang onto Duma than they could ever contain Xan once he grows up.

Duma quickly becomes a “hero’s journey” film, constantly showing Xan fighting overwhelming physical odds to accomplish the stated will of his father. The boy Xan sets out with Duma into the wilderness, far from family, the only place he can still receive the mantle of manhood.

After Xan runs into trouble, another wanderer, Rip (Eamonn Walker), is introduced. If Xan were named Huckleberry Finn, then Rip would be Jim—the older, cynical outlaw who doesn’t believe he needs anyone else, least of all a lonely boy in the center of the desert. As their circumstances force them to depend upon one another, both are significantly changed. Their journey becomes more meaningful than each individual exercising his own survival skills, and the companions’ friendship deepens with every trial.

In one critical scene, Xan and Rip discuss death. Xan wonders how a person can just disappear from his life, and he reveals a deeper anger. Rip seems to speak from experience in responding, “[Those who die] leave when they’re ready, not when you are.” The older man then states, “We all do what we can before we disappear,” revealing an underlying despair and unbelief in anything beyond their present physical existence. The Apostle Paul summarized this human viewpoint when he quoted, “Let us eat and drink, for tomorrow we die!” (1 Corinthians 15:32).

“Duma” succeeds spectacularly in showing us Africa as most Westerners will never experience it. There are intense action sequences throughout that parents will want to accompany their children in attending, and there are viewpoints on serious themes that parents should not allow to slip past without discussion. “Duma” is a great film that shows off the beautiful creation of an untame God.

Positive—My husband and I took my eight year-old daughter to see this movie, and probably enjoyed it as much if not more than she did. It was positive, beautiful, and life-affirming. It was most definitley the best movie we have seen in quite a long time. I would recommend it highly for children and adults.
My Ratings: Good/5

Robyn Ramirez, age 33
Positive—PLEASE, do not miss DUMA. My daughter and I absolutely loved it… The scenery is amazing… The soundtrack is beautiful… And DUMA is awe inspiring… For those armchair travelers, here is your chance to see a part of Africa in all of it’s unspoiled beauty… You will feel as if you’ve been there… You can almost feel the heat and smell the air… Unlike any movie I have ever seen… Experience it for yourself… Absolutely a remarkable movie!!
My Ratings: Good/5

Angie Luchesi, age 44
Positive—If you are looking for a family-friendly film, this one is it. Our entire family enjoyed this movie. It was wonderful to sit and watch a film with no bad language and with a strong message of the importance of family. Don’t let this one slip by!
My Ratings: Good / 5

Penny Zeller, age 33
Positive—Wow! “Duma” was a pleasant surprise. This is a splendid movie that I believe most Christian parents can enjoy with their children. (It’s finally out on DVD.) I didn’t recognize any of the actors except for Eamonn Walker who plays Rip (“Lord of War”, “Sum of All Fears”, “Unbreakable”). There are three or four nature scenes involving wild African animals killing each other that may frighten only the youngest of children. The language is appropriate for a family film, with only one minor slang used by Rip to describe Xan’s “bottom.” I really can’t see parents finding this film objectionable on any level. Rent it today, or better yet, buy it!
My Ratings: Good / 4

Albert Anthony Buonanno III, age 49
Positive—My little brother (eight years old) wanted to see this movie ever since he very first watched the trailer. I thought it’d be just another glorified Discovery Channel film, where a thin plot would cover the shots of cheetahs and other wild african animals. It was actually surprisingly good. The plot was excellent and my eyes watered at a few parts. For those who think this is just a film about a cheetah who has to be released into the wild, you are wrong. This movie deals with death, escaping pain, and reconciliation. There are some suspenseful parts and one scene where a sick man has a swollen face that might shock some children.
My Ratings: Good / 4