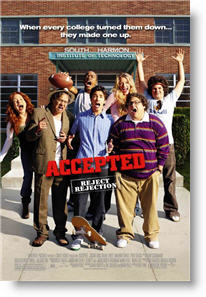 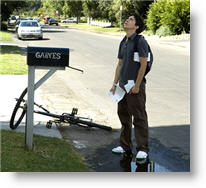 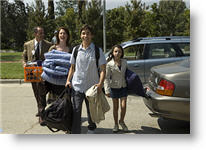 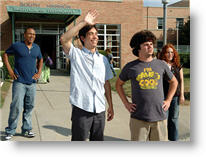 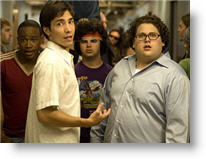 Discover for yourself the overwhelming message of HOPE that God brings to man!

“When every college turned them down… they made one up.”

Oops! Bartleby (Justin Long) forgot to do his homework all four years in high school and now the unfair college establishment wants to hold this against him and not let him get into even a crummy college. Even his college entrance essay entitled “I Don’t Have a Clue” provided no help. His unsupportive parents who apparently didn’t notice his lack of academic prowess realize now that he is certainly doomed to a lifetime of failure if he doesn’t get a college degree. To fix this situation for himself and his similarly rejected friends, Bartleby fakes an acceptance letter, creating South Harmon Institute of Technology (acronym S.H.I.T.) to appease his parents.

To cover for his first lie, Bartleby decides to use the ten thousand dollars his father gives for tuition to rent and repair an abandoned mental hospital in order to make it appear as his college, continuing the ruse. The false Web site created for South Harmon, accidentally attracts and “accepts” hundreds of students so Bartleby is faced with the daunting task of actually creating a college for them to attend.

This massive deception could have been funny and entertaining with some life lessons thrown in, but instead Bartleby makes up a college that provides a forum for continuous profanity, numerous crass jokes about masturbation, premarital sex, drunkenness, oral sex, drug use, and endless variations on the word, sh*t. Class time at South Harmon consists of pool parties, ogling voluptuous girls in string bikinis, creating phallic statues, out of control rock concerts, wet t-shirt contests, and psychic channeling to blow things up. Just for fun, students use electro-shock treatments as a way to get high. The crazy thing is, the audience is actually supposed to view this extended adolescence as helping these kids “find themselves” and exploring their “artistic side.”

The rival academic college, the legitimate Harmon University, whose claim “the best colleges are defined by how many people they reject” is portrayed as even worse. Bartleby’s friend, Schader (Jonah Hill), who attends the real Harmon University, believes that the main purpose of the college experience is to have sex with beautiful girls. While Bartleby can be commended for encouraging Schader to say no to the indignities of frat-boy hazing, the women in this film are not afforded the same favor. Uncle Ben (Lewis Black), the cynical, alcoholic Bartleby hires as dean of South Harmon, wants to know why telling a girl she has “nice t*ts” is sexual harassment. Uncle Ben’s lectures include a barrage of dialog too profane to quote.

“Accepted” attempts to tap into the angst that teens experience in the rat race to get into college. The process can be unfair, with some kids cheating on exams, others having to compete with students that have the luxury of private SAT tutors. The ability to gain even a good high school education can leave many teens wringing their hands as they watch perhaps less deserving kids awarded. However, the flip side of this is not giving up or being a flake. “Accepted” preaches that it does not matter what you have to offer or how hard you are willing to work, but instead that partying your life away or lying to get your way is a legitimate option. The good news is that Christ will accept people just the way they are. “For God so loved the world, that he gave his only Son, that whoever believes in him should not perish but have eternal life” (John 3:16). The even better news is that Jesus will not leave you in your old life but give you a new life, and this new life will not be a continuance of trying to be okay with being aimless and lost.

Neutral
Neutral—Ended up here because “Invincible” was sold out. Would not have normally attended. Although it was filled with the usual adolescent, vulgar humor, it did carry an underlying message about learning and non-conformity. The idea that this was a place for the rejected may even remind the viewer of Christ’s relationships with the lowly. Not sure I’d recommend the movie, but I did think there were some redeeming qualities.
My Ratings: Offensive / 2

D. Shareski, age 42
Neutral—I watched this with my fiance' and we both liked it as a movie. I would not recommend it to anyone under 13 or 14 unless parents view and approve of it first. The film is funny and light-hearted and hits its mark as a fun movie. It does contain the usual crude language and sexual remarks of most movies in this genre though and that’s why I’d keep younger kids away. I thought that the performances by Justin Long, Blake Lively and the crew were actually pretty good for a teen movie; Long is doing a good job at becoming the go-to actor for the oppressed teen who everyone roots for. The film also DOES teach some good lessons on perseverance and the risks that could come with lying and/or cheating.
My Ratings: Average / 4

Mike, age 27
Negative
Negative—I took a group of young adults with special needs to see this movie, and myself, along with most in the group were appalled at all of the garbage in it. Between the many uses of the schools initials sh—t, girls wearing next to nothing in many scenes, and the many obscene jokes, I spent most of the movie looking at the floor of the theater and at times plugging my ears so as not to hear another swear word. Overall, I would definitely NOT recommend this movie to anyone.
My Ratings: Extremely Offensive / 3

Sarah, age 23
Negative—I didn’t even see the entire movie. They swore every other word, and I heard more sex-related words then I ever want to hear again. Parents, this is not a movie that you should take your kids to. This isn’t a movie even adults should go to. It’s a waste of time and money.
My Ratings: Extremely Offensive / 2

Robert, age 22
Comments from young people
Negative—I took my Christian friends to this movie expecting something funny, not vulgar and pointless. My friend Joey had to keep looking down every time a nude scene came up, plus the cussing was horrible. …it was a very pointless, time-consuming, and unscriptural movie that I detest. I would not advise anyone to watch it. Ephesians 4:22-24, ‘to put off your old self, which belongs to your former manner of life and is corrupt through deceitful desires, and to be renewed in the spirit of your minds, and to put on the new self, created after the likeness of God in the righteousness and holiness.’

P.S. If you are a true Christian, I advise you not to watch this, because it will only cause you to stumble, and it will not benefit you. …
My Ratings: Extremely Offensive / 1

Lorraine, age 17
Neutral—I went to this movie because I liked Blake Lively in “The Sisterhood of the Traveling Pants.” I did not like her in this movie though. The film was somewhat offensive, because of the amount of bad language. The morals were obvious and good, saying that teenagers should be able to keep their passion and goals, but the plot portrayed that in an unusual way. Overall, the film was funny, but there was much overused offensive language.
My Ratings: Offensive / 3

Kate, age 15
Positive—This movie was hilarious, and Justin Long and Lewis Black were very funny… I would recommend this movie to almost everyone.
My Ratings: Average / 4

William, age 15
Positive—It’s true there were a lot of stereotypically “teenage” humor jokes made in this movie. But I feel bad seeing it torn to pieces here. The movie was hilarious, as there were a lot of simply funny (not crude) moments. Also the message of this movie is important and as a teenager getting ready to go to college, it’s a comfort to know we’re all worth something, etc. I thought the message of this movie was great, the last closing scene was amazing, and if you can get past some of the inappropriate language and jokes, it was hilarious.
My Ratings: Average / 4

Tiffany, age 17
Neutral—This movie had an important underlying message, but was hard to perceive with the profanity, and sexual content. I had a few really good laughs, and my friends and I left with an overall good feeling, but the sexual content was to high for me to actually enjoy this movie to it’s fullest. The shirts that were designed were crude and could have been avoided. But also take into consideration that the “false” college actually allowed it’s scholars to excel in their talents. I think some of the girls’ clothing, and a few scenes with them lying next to guys in bikini’s is another thing that should be taken into consideration. This film would have been a lot better without those scenes, the swearing, and sexual content. I suggest that only mature teens able to perceive the bottom line and adults go.
My Ratings: Average / 2½