for some violent and sexual content, and teen drinking 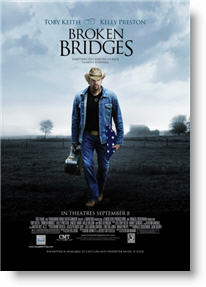 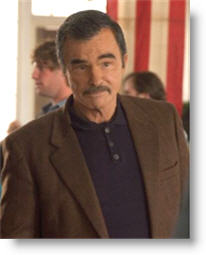 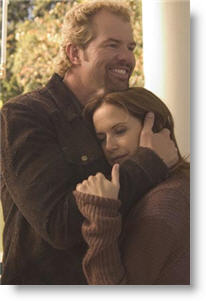 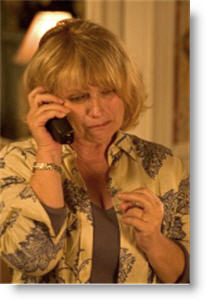 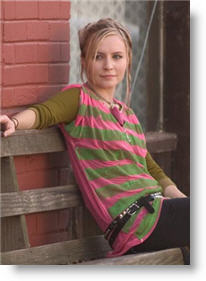 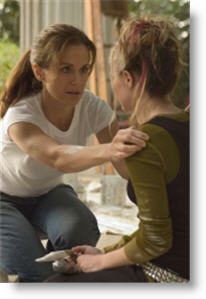 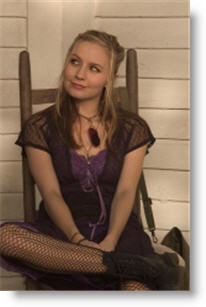 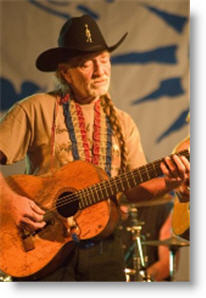 “Sometimes you have to go back to move forward.”

Country Music superstar Toby Keith made his motion picture acting debut in the CMT movie “Broken Bridges.” Keith played Bo Price, a country music singer whose fame and glory was taken away by alcoholism. While watching a news broadcast at a bar, Price finds out that his military younger brother was killed during helicopter practice maneuvers. As a result, he returns to his small town home for the funeral. Also coming home for the memorial is Price’s old flame, Angela Delton, played by “Sky High” star, Kelly Preston. Her younger brother was also killed during the military exercise, so she returns home with her rebellious 16 year old daughter, Dixie, who is also Price’s daughter played by “Color of Friendship” star, Lindsay Haun. Price finally catches up with Angela and meets his daughter for the first time. In the meantime, Angela’s reunion with her estranged father, portrayed by Burt Reynolds, is met with contempt for leaving her home with her unborn child.

“Broken Bridges” is an emotionally sweet story that shows how each character deals with their severed and troubled relationships and how they build their bridges to fix them.

For Price and his daughter, it’s their common love of music that helped develop their relationship. For Angela and Price, it’s the history they shared that brings them closer. For Angela and her daughter, it’s spending the time together without interruptions from her demanding job as a television reporter and her demanding boyfriend who is also general manager of the station that they start to bond. For Angela and her father, its a combination of Angela’s father getting to know his granddaughter and Angela’s mother, played by “Tender Mercies” star Tess Harper, getting a stroke that brings a father and daughter together.

Even though the film ended in a pretty predictable package, it was the getting there that was so enjoyable to watch. The story was fresh and original, and it was interesting to see how the different circumstances intertwined with one another. At first it was very hard to get attached to the characters because the emotional outpour wasn’t there. However, as the movie progressed so did the affection and involvement you would have with these character, so much that the ending would just tug at your heartstrings. Keep in mind, this is a PG-13 movie, so there is some profanity in it, but not so much that it takes away the charm of the story.

The biggest curiosity was Keith’s ability to act and to carry a movie lead. As far as his acting ability, Keith’s role wasn’t really much of a stretch to what he is already except for the alcoholism, but when it came to interacting with Preston, Haun, or Reynolds; he held his own pretty good. As for carrying lead, I would say he shouldn’t have been singled out in the opening credits. Every role was equally important to the success of the story.

What was especially nice about the movie was how God played an intricate part of these characters lives and in the movie. “Amen”’s Anna Maria Horsford played the friend of the family, Loretta, who is also a strong woman of faith. Since Angela left the small town scene, Loretta has been the leaning post for Angela’s mother and the family and when Angela returns home, she becomes one for her as well, along with giving life lessons to her daughter, Dixie. She was the person everyone can count on and talk to.

As for the message of the film, Keith’s character, Price sums it up in the end. To paraphrase, he said that the Lord works in mysterious ways and that no matter what it is you’re going through; God always has something good in store for you even though you can’t see it right away. Your time is not necessarily His time. All in all, “Broken Bridges” is heart-warming film with a terrific cast, great music, and a very good story. On a grading scale, I give “Broken Bridges” a B+.

Comments below:
Positive
Positive—Being a Tennessee native, I watched the movie more closely than most. We are usually protrayed as hicks. But, the movie plot overall was good. It’s definitely a “girls night out movie”—girls dating age and over, because of some of the story line. Best viewed with mom in my opinion. We need more movies that portray positive solutions of forgiveness to hard relational problems. I give it an B+.
My Ratings: Better than Average / 4

Annette Cooper, age 44
Positive—There need to be more movies that betray forgiveness and second chances. Not one person has lived a perfect life, nor lived a life without a mistake they wish they could take back. Thou the soldier part was betrayed alittle out of line. The fallen soldiers family does get benefits and enough money to last way more than a year. In most cases 400,000 dollars. Though the money can’t replace the loved one lost I think the movie should have used a line like that. Our government might be hard, and a little out of whack, but they still try to take care of the military and its family. Back to the movie! Toby did a great job in his first movie and Dixies song was amazing.
My Ratings: Excellent! / 5

Adam, age 24
Positive—I loved this Movie. One minute I was laughing and another minute crying. I thought Toby Keith did an excellent job. We need to practice more forgiveness in this old world. I loved the part where Toby Keith said that God works in mysterious ways. Maybe you don’t believe in saying hells, damns, etc., if that is the case then you might be offended; but, you need to get in the real world. Remember, there was only one perfect man.
My Ratings: Excellent! / 5

Dale, age 41
Negative
Negative—This is the corniest film that I have seen in years. I’m tired of these cliched inspirational films. If you’re going to inspire your audience, you need to find an original way to do it, otherwise, it comes off as forced and ridiculous. Many of the scenes in this film that were supposed to be serious were, in fact, unintentionally hilarious. I wouldn’t recommend this film to anyone, but I’m sure that there are many country music fans that will flock to this. I never thought that I’d ever say this, but compared to this, “Pure Country” was better. And that’s not saying much, either.
My Ratings: Better than Average / 1

Lance Schroeder, age 37
Negative—I didn’t like this. I thought the acting was horrible. I went with a friend of mine from work. She had already seen it, and wanted to take me to it. She made it sound so great. I have to say one thing: this is the LAST time I go to the movies with her! This was NOT entertainment. This was “Hilbillies on Parade”! There was cursing in it, and also some sexual situations. Even though they weren’t graphic, I don’t think that a PG-13 rated film should have even implied the things that were in this film. I would NOT recommend this film for any age group. It’s that bad. Whoever directed this film needs to give up their job. Seriously.
My Ratings: Better than Average / 1

Abigail Sanders, age 42
Negative—Overall, I did not enjoy this. We’ve seen this sort of film many times already. It’s just Pure Country with a different title and different actors. My wife and I just seemed to be bored by it. It didn’t offer anything new. I was hoping that it would at least be somewhat original. Ho hum. The acting was okay, I guess, but I wouldn’t suggest that the lead actor quit his day job anytime soon. Casting Willie Nelson in this drivel only makes it harder to endure. I don’t mean to sound like a film snob, but even mainstream audiences are getting wise to the lack of originality in today’s cinema. Maybe that’s why box office numbers are so low; we’re tired of seeing the same recycled plots over and over and over again. If you must see it, rent it, and don’t pay more than a dollar or two for it.
My Ratings: Good / 2

George Banks, age 35
Negative—My best friend and I went to see this last night, and we both thought that it was pretty lame. Toby Keith can’t act. This came as no big surprise to us. I can’t believe that we paid eight dollars a ticket to see this. I really want my money back! Also, I wouldn’t recommend this for younger kids. It’s PG-13, and really pushes the envelope in the language department. Plus, there is also lots of sexual innuendo and one implied sexual encounter. Overall, a major disappointment!
My Ratings: Good / 2

Linda Schumacher, age 25
Negative—I want to encourage Christian families to skip this film, and spend their hard-earned money on something worthwhile. This film was a travesty. The acting was of the lowest caliber, and so was the story and everything else. My wife fell asleep. For the first time in fifteen years, my wife fell asleep during a movie! I couldn’t believe it. I knew right then and there that this was a dud. I should have known. Toby Keith is NOT an actor. Also, any film produced by CMT should definitley have “flop” written all over it. The next time, I’ll know better. I’ll be more cautious. Also, the language was very offensive, and there was a lot of it. I just want to know why Hollywood feels the need to expose modern audiences to such things. This film made me long for the old days of Hollywood! Please don’t waste your time or your money on this. If you want to see a good film about country music, see “Tender Mercies” with Robert Duvall. I recommend that one!
My Ratings: Very Offensive / 1

Stumpy Wilbanks, age 52
Comments from young people
Positive—I actually enjoyed this movie a lot. Perhaps you have to truly enjoy the country life or have experienced it to enjoy the movie in its entirety. I thought the movie was well played out and was inspirational. It depicted small town life as it truly is without portraying the people as hicks which is a common misconception about what those who live in the country are like.

The movie just came out on DVD and I will most definitely buy it!
My Ratings: Better than Average / 4½