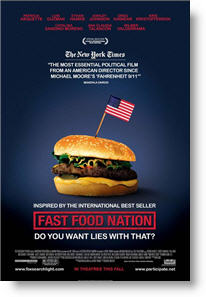 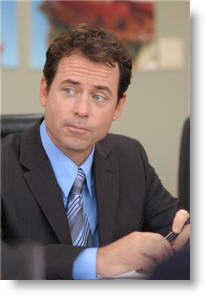 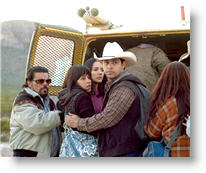 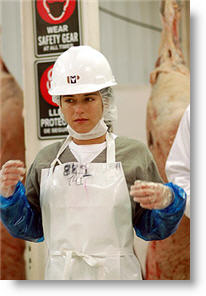 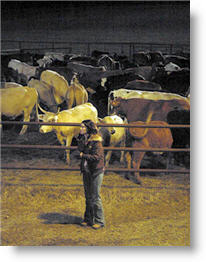 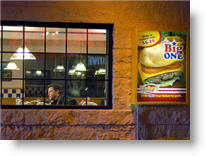 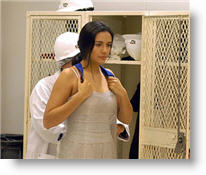 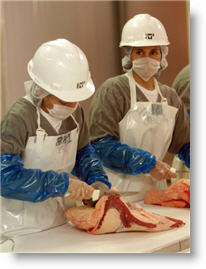 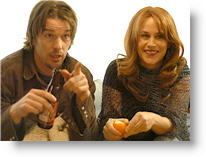 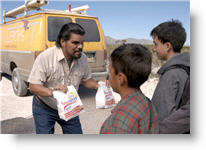 FOOD in the Bible

When did animals begin to kill and eat other animals? Answer

“Do you want lies with that?”

On the thankfully rare occasions that I am subjected to fast food, I can honestly admit I don’t stop to put a whole lot of thought into where my food came from, or how it got from the farm to my plate. “Super Size Me” gave me plenty of reasons not to ponder these things; particularly, the test involving the French fries that never seem to go bad, no matter how many months they sit around in a jar. How is that possible? Well, some things are better left unknown, right? Who wants to spend the time and money figuring out what is actually in some of our favorite foods when we can unquestioningly consume it just like millions and millions of other hungry people?

Well, if you are one of those who like things the way they are, and strongly believe that the “Don’t Ask, Don’t Tell” policy applies to everything, including food, then under no circumstances would I recommend you seeing Fast Food Nation, the latest film from director Richard Linklater (“Before Sunset”). The movie is based on the non-fiction expose of the same title by Eric Schlosser, who also co-wrote the film.

The film is told through interwoven stories and with an impressive, Altman-like ensemble cast featuring Bruce Willis, Greg Kinnear, Patricia Arquette, Ethan Hawke, Kris Kristofferson, Esai Morales, Catalina Sandino Moreno, and Luis Guzmán, to name a few. One of the stories follows Don Anderson (Greg Kinnear), a marketing executive for Mickey’s fast food chain who is sent to Cody, Colorado, to investigate the plant where all of Mickey’s meat comes from. An independent study revealed that Mickey’s beef patties contained significant amounts of “fecal bacteria,” and so Don goes to check it out. He tours the plant, where many illegal immigrants are hard at work slicing and dicing the meat and various other parts of the cow.

Along the way we meet some of the immigrants who risk life and limb (literally) for a chance to make a better living for themselves than they ever could back in Mexico. Luis Guzmán plays the transporter so to speak; he picks the immigrants up and drives them to the hotel where they will all stay in the same room, waiting to be picked to go work at the meat plant. Bobby Cannavale plays Mike, the man from the plant who decides who gets to work, and where they have to work. He is a repulsive human being, who sleeps with all the immigrant women and provides them with drugs before throwing them out in favor of the next woman to who comes to the plant.

We also meet Amber (What Women Want’s Ashley Johnson), a happy-go-lucky teenager who works for the Mickey’s in Cody. She enjoys the job, although she could no doubt work a million other places. She is beginning the downward spiral of being caught in a small town rut, much like her mother Cindy (Patricia Arquette) was years before. A surprise visit from her Uncle Pete (Ethan Hawke) spurs her towards living a life different than everybody else, and making the most of the chances she gets.

Fast Food Nation surprised me. For some reason, I was expecting a comedy; maybe it was the cast, maybe it was the trailer, maybe it was because I was expecting something like Super Size Me. Believe me, this is not a comedy. This is a dark satire that will upset some, and make most of the others nauseous. While the film focuses on the fast food industry and makes its beliefs and opinions known, it has other issues it wants to deal with as well. Immigration and Border Security are issues in the film. So also are the Patriot Act and Eminent Domain.

Fast Food Nation would actually make for a great discussion movie were it not for the content, which is very offensive and should unfortunately keep most Christians away. There is plenty of language. I thought about counting the number of f-words, and while I stopped after a while, my guesstimate would be around 40. There is, of course, other language on top of that. There are also very unpleasant scenes involving the butchering of cows, with plenty of blood to keep the squeamish away. A man falls into one of the pieces of meat processing equipment and loses a leg, which is also a bloody ordeal. A few people walked out of the theater I was at during these scenes.

But what surprised me the most were the sex and sex-related scenes in the movie. We see three strong sex scenes, one of which contains nudity. We also graphically hear sex occurring from a porn movie Don orders in his hotel room, although we don’t see anything in that scene. Lastly, there is one scene that might offend some where a group of college students stand around and discuss how the people responsible for society’s problems are often the Christian “what would Jesus do” types. This brief conversation is heard in the background of the scene, but I mention it in order to be thorough.

Aside from the content, I really liked “Fast Food Nation.” The performances are all outstanding. Ethan Hawke is fabulous for the brief time he is in the film, and provides us with a lot of thought provoking opinions on life. Catalina Sandino Moreno (“Maria Full of Grace”) delivers another heart-breaking performance as an immigrant trying to make something of herself in America. Moreno proves that her great performance in Maria was no fluke, and is completely mesmerizing here. And the message of the film is one that should make you cautious at the very least. While this film may not turn you completely vegetarian, it will likely keep you away from fast food for a little while, which can’t be a bad thing.

Positive
Positive—“Fast Food Nation” is far from a perfect film, and has a lot of problems in its construction and execution, but it addresses issues a lot of us tend to ignore. There are valid problems in America within the meat industry and concerning the fate of undocumented workers, and the film is a bit overthetop to “wake” the audience up.

Part of being a good Christian is attending to the plight of the downtrodden and abused, whether it’s people (no matter how “illegal”) or animals, and turning a blind eye to the exploitation all around us leads to moral inconsistency. If you don’t think about these kinds of things often, or do anything about them, you should see the film, no matter how viscerally difficult the experience is, if only to ignite a much needed debate both with other people and within your own heart. (While there is a fair amount of swearing and sexuality, they aren’t celebrated. It’s the villainous, unlikeable characters who do it.)
My Ratings: Offensive / 3½

Henry, age 23
Neutral
Neutral—My friend and I went to see this movie not fully knowing what it was all about, all we knew was thast it was about fast food resturants, and for some weird reason we thought it was supposed to be funny becasue there was very little advertisement for it.

The message of the movie itself was understandable, it was to show how and where the beef for resturants is made. The only part of the movie that was objectionable was the guy that ran the slaughter house slept with all of the pretty girls that worked there, and it showed more than needed. Also, it showed them killing the cows which made sick. See this movie, if that kind of stuff doesn’t bother you, but I wouldn’t recommend it or anything.
My Ratings: Offensive / 3½

Stefanie, age 19
Comments from young people
Negative—Wow what a TERRBLE MOVIE! I went with my family to see this “movie,” and we all thought it would be like the book. But nooo, this movie had almost nothing based on the book and fast food industry. It had the use of the “f” word thousands of times, and one guy used the f-word 3-5 times in almost each sentence he said.

I had to sit through this garbage almost to the end, but my Mom and I walked out. It had sex scenes twice and showed everything. …Christian Rating: Negative 0 / Grade: F- / They should have rated this movie NC-17. DON’T SEE THIS MOVIE, I REPEAT DON’T SEE THIS GARBAGE.
My Ratings: Extremely Offensive / 1

Sean, age 14
Comments from non-viewers
…I have not seen the movie and nor do I plan to; however, I have read the book Fast Food Nation. My father owns three McDonalds, and he has been involved with the fast food industry my entire life. Basically, what I am trying to say, is consider the information you are being fed before you believe it. Just because this movie states that fecal matter can be found in the meat, does not necessarily mean that is the case.

Why in the world would any fast food company want to do something that would cause potential harm to their customers? Yes, you could say money is an issue, but honestly, the goal of a restaurant or company is to make money; and it would be much harder to make money if you are harming your customers. Also, there is nothing wrong with working at a fast food Restaurant. I do not know why, but there seems to be a prevailing preconcieved notion in our society, that working in fast food is bad. Yes, it is not the most glamorous job, but it provides many teenagers with the hard work and experience to succeed later on in life.

All in all, I just want people to consider information before they believe it, even mine, if you are questioning it. I have grown up around the industry, and all I can say is that the picture portrayed in this book and movie is very contradictory to what I have experienced.
My Ratings: Extremely Offensive / 1

Andrew, age 18
Comments from young people
Positive—This is a brilliant film. I was so pleasantly surprised by this film’s near-perfect execution and great message that I nearly wanted to start it over and watch it again. Fast Food Nation deals with many important issues, and makes a very positive and thought-provoking statement on all of them. It is rare to find a movie that is so ethically conscious.

And aside from the very positive messages of this film, the acting, cinematography, directing, etc. is all very impressive in that it is fitted to the movie’s plot perfectly. A fine example of why independent films can be a much better investment of time than most commercial Hollywood fare. Anyone interested in a film that will truly make one think about their own ethics and morals will not be disappointed.

(For those concerned with the film’s content, “Fast Food Nation” contains: strong language, sexuality, nudity, and gruesomely disturbing images related to animal processing. It is important to note that the majority of the film’s sexual content is more disturbing than exploitative, and is used to make a very important moral statement.)
My Ratings: Better than Average / 5