for some thematic elements, mild language and brief rude humor. 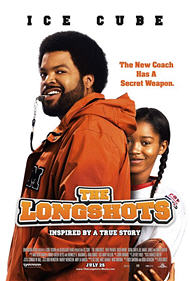 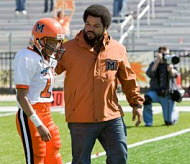 “The new coach has a secret weapon.”

“The Longshots” is about a girl named Jasmine (Keke Palmer) who is dealing with insecurities and insignificance as a result of her not-so-outgoing personality, but probably more so from the absence of her father, whom she has not seen in five years. Due to a schedule change at her job, Jasmine’s mother, Claire (Tasha Smith), enlists the help of Jasmine’s uncle, Curtis (Ice Cube) to keep Jasmine occupied everyday after school until she returns home from work. Curtis, who is dealing with his own set of issues, like unemployment and still mourning the loss of his mother two years later, is reluctant to take on the assignment, because in his own words, “I don’t even like kids.” This sets in motion Jasmine’s journey to become the first girl in history to play on a Pop Warner football team.

The movie conveyed some very positive messages that are invaluable for our youth today. Members of the Minden Browns football team were encouraged to work hard and to work together. Perseverance, despite the odds, and winning (or losing) with class and sportsmanship were also important themes throughout the movie. During a sermon, Reverend Pratt (Garrett Morris) was trying to encourage the congregation that during hard economic times they should focus on what they do have, rather than what they do not have. He also encouraged members to take action, in order to bring about change, rather than wallow in self-pity. When confronted with her desires to become a model and to play football, Jasmine felt as though she had to choose one over the other. However, Curtis informed her that she could do both. Neither do we have to limit what all God can do with and through us. I was most impressed by Jasmine’s willingness to forgive Tammy, the cheerleader, of her taunting.

While “The Longshots” sent some really good messages to its viewers, there were some undesirable portions of the movie, as well. At the beginning of the relationship, Jasmine spoke very disrespectfully to Curtis. While he may have “deserved” some of her comments, Curtis was an adult that Clair, her mother, had put in charge of her. He was serving as an authority figure… a parent, if you will; and the Bible says,

“Children, obey your parents in the Lord, for this is right” (Ephesians 6:1).

At one point, while practicing, Jasmine throws a football and breaks a window in someone’s house. Instead of taking responsibility for it, Curtis encourages Jasmine to run, and he runs away with her. There are a few scenes where Curtis is drinking beer (even on school grounds) and profane language is used from time to time throughout the movie. But the most disturbing scene in the movie was when Reverend Pratt was encouraging the residents of Minden (Illinois) to come together and fix up the downtown, due to all of the publicity they were receiving as a result of Jasmine leading the Minden Browns as Quarterback and the team returning to the Pop Warner Super Bowl after a long absence. In his “encouragement speech”, he used vulgarity—the word, “a_ _”. It is most disturbing because it presents a very dangerous, but all-too-common doctrine: that Christianity is something to do on Sunday mornings (only) and continue to live like the rest of the world Monday through Saturday. The life of a Christian is to be a life styled after Jesus Christ. Perhaps the word was used to demonstrate Reverend Pratt’s “human-ness”, however, Romans 12:2 says,

“And do not be conformed to this world, but be transformed by the renewing of your mind, that you may prove what is that good and acceptable and perfect will of God.”

I was also disappointed in the lack of forgiveness extended by Jasmine to her father (Malcolm Goodwin) at the end of the movie. While we can all empathize with Jasmine’s feelings of hurt due to her father’s actions or lack thereof, the Apostle Paul tells us in Colossians 3:13 that we are to bear with one another and forgive one another as Christ forgave us.

Overall, I found “The Longshots” to be fairly entertaining, as I love a good “underdog-beats-the-odds” movie. I would have preferred that the vulgar language be eliminated so that more kids could enjoy the movie. I also would have preferred that the number of subplots were reduced so that the main storyline could have been further developed. I felt as if Mr. Santora, the writer, tried to do too much within the hour and 34 minute timeframe, therefore I walked away from the movie with too many unanswered questions.