for language, some sexual humor, and brief drug references 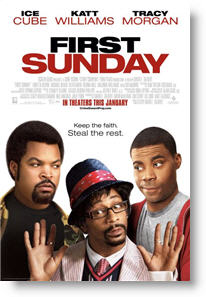 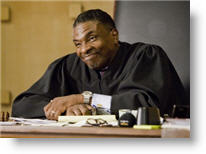 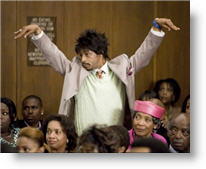 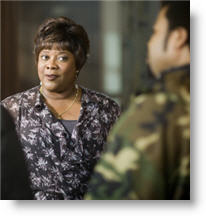 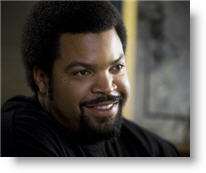 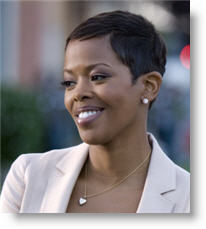 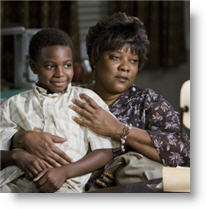 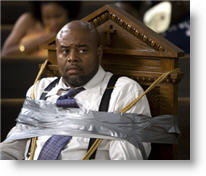 “Keep the faith. Steal the rest.”

“First Sunday,” a comedic film with known celebrities and all the right ingredients, has difficulty serving up greatness. Its bland story line, subplots, and overall message left me wanting more—and comparing it to the celebrated works of Tyler Perry. Despite that, the choir director Rickey (Katt Williams), has star presence, as he delivers witticism by the barrel full during typical church foolishness.

Durell (Ice Cube) finds himself in an anxious situation when his son’s mother, Omunique (Regina Hall), announces she is moving to Atlanta and taking Durell Jr. (C.J. Sanders) with her. Unrealistically, she needs to come up with over seventeen thousand dollars—a year’s worth of rent—for her hair salon within a week or she forfeits renewing her lease.

LeeJohn (Tracy Morgan) and his best friend Durrell always find themselves among corrupt circumstances—by choice, not chance. LeeJohn makes a deal with Jamaican gangsters to deliver stolen wheelchairs. The delivery goes awry when the two friends engage in a heated car chase with police. Once again, they are in front of Judge B. Bennet Galloway (Keith David) who decides to forgo sentencing jail time and, instead, orders five thousand hours of community service.

Durrell runs out of options and gives in to LeeJohn’s criminal caper—to heist the corner church, First Hope. They attempt to steal monies raised; although unbeknownst to them, someone beat them to it. Therefore, Plan B goes in full effect, with guns drawn. The choir rehearsing and those attending a meeting are held hostage. As the evening progresses, righteousness prevails where love and forgiveness flow.

Stereotypical characters are peppered throughout the screenplay, and the film lacks intensity. Yet, on two separate occasions Sister Doris (Loretta Devine) and LeeJohn break free from the mundane monotony and conjure up warm empathetic emotions.

Biblically, laughter is good medicine, as stated in Proverbs 17:22. Furthermore, comedy pokes fun at real life releasing the stress and worries of the day. Still, sometimes the path we take to get a hardy laugh is offensive and in direct conflict with wholesome, Christian Bible-believing qualities.

“Therefore be imitators of God as dear children. And walk in love, as Christ also has loved us and given Himself for us, an offering and a sacrifice to God for a sweet-smelling aroma. But fornication and all uncleanness or covetousness, let it not even be named among you, as is fitting for saints; neither filthiness, nor foolish talking, nor coarse jesting, which are not fitting, but rather giving of thanks.” —Ephesians 5:1-4 NKJV

Conversely, two Scriptures are mentioned in the film, and the necessity of prayer emphasized before a meeting by Sister Doris. These are welcome vignettes, along with the church choir praising heavenward in song.

Durrell and LeeJohn experience that hope does not disappoint, as told in Romans 5:5, and the truth that God always makes a way of escape (shared in 1 Corinthians 10:13), providing a second chance.

Neutral—A comedy whose funny lines were all in the trailers. The message was positive but burdened by a heavy handedness.
My Ratings: Moral rating: Average / Moviemaking quality: 2½

Bill Walters, age 58
Movie Critics
…a host of one-dimensional characters in search of a point… some in the cast rise above it, especially Devine, McBride, Olivia Cole as an aging parishioner and, per usual, Ice Cube. …

Mack Bates, The Milwaukee Journal-Sentinel
…ultimately, the movie's message—…violence and thuggery are bad, as well as putting the blame on others instead of taking responsibility for one's actions—… But do we need jokes about transvestite masseuses, overweight church ladies and flaming gay choir directors to get there?

Claudia Puig, USA TODAY
…The movie’s total lack of focus and its unimpressive script should render it totally unwatchable. Weirdly, that doesn’t quite happen. There’s something endearing about these characters…