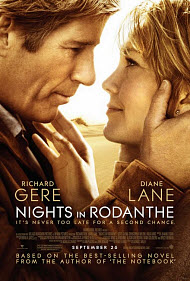 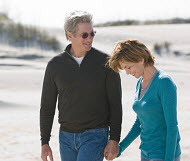 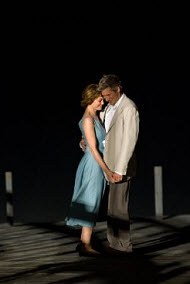 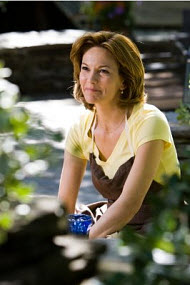 “It’s never too late for a second chance.”

The plot of the film builds on the parallel lives of Dr. Paul Flanner (Richard Gere) and Adrienne Willis (Diane Lane). Complete strangers, their lives seem to have spiraled out of control—and they lost their true self along the way. Through unrelated events, both Paul and Adrienne find themselves alone at an Inn in Rodanthe North Carolina, during a hurricane and fall madly in love.

It's pretty formulaic, really. Each one realizes the sad state they are in, and something about the complete stranger they are sharing space with inspires them to be something better than themselves. Just like that, the father is awoken, and the artist is redeemed.

In an era where television and movies pin parents as people with all of the freedom they had before, their babies and children only “popping” up every now and then, when needed—I appreciated the passion in which Adrienne's character mothered. Seeing the way her eyes would light up when she would speak of her kids seemed to uplift my sometimes weary mommy heart.

Despite the uncomfortable circumstances of Adrienne's marriage, I truly appreciated their portrayal of a separated couple with adultery dangling between them. There was something raw and unglamorous about it (which is also not a message Hollywood declares very often).

Several moments in the beginning of this film are overwhelmingly honest in regards to the reality of a mother's life. The way that Adrienne's exhaustion displayed the weight of her world was something that any mother, single or otherwise, could relate to. (These things are worth noting simply because it isn't this version of motherhood that we see portrayed on the screen, very often. It's typically the glamorous and clean dream of motherhood, or the worst case scenario).

The reason that Paul is in Rodanthe to begin with, is a tragic one. This entire part of the plot is moving and beautiful—a great example of how taking responsibility for our actions isn't always for our benefit, often we need to see things from another's eyes and how our actions may seem to them.

Profanity is present, but not over powering.

There is one sex scene that, although it shows no nudity, is a bit graphic in an entirely different way. I suspect it was meant to show something tender and meaningful, but that simply wasn't conveyed to me.

After the sex scene there is a prolonged scene of implied nudity as Paul talks about the peaks and valleys of Adrienne's body, revealing a little too much of certain areas, in my opinion.

During the earlier parts of dialogue between Paul and Adrienne, she fills him in on local legend and folklore. Much of this involves his introduction to specific spirit guides, gods and goddesses.

“Nights in Rodanthe” is the story of two individuals and the place that their lives lead them to, eventually, together. Though the film is full of a talented cast, the other actors truly play secondary roles with very little screen time. The majority of the screen time is centered around scenes with Lane and Gere, be they dialogue filled or set to music.

It is in the very premise of their relationship that I struggled the most, and upon discussing the film at length with others afterwards, I found that I was not alone. Immediately after their introduction, Adrienne (Lane) is opening up and disclosing personal information to Paul (Gere) without an invitation by him, and seemingly quite out of place when considering the personality of her character. Once a mutual dialog developed between the two characters, I often felt like there was an underlying conversation that I just wasn't a part of. I kept feeling as though it wasn't making sense, how the two of them would get from point A to point B. During one scene of dialog (in the art room) he seemed to ask her a randomly deep and completely awkward question and her answer was this long and drawn out reply which had nothing to do with the question. While the characters on screen went about this obviously deep and emotional conversation, the audience just sat there scratching our heads and wondering what in the world they were talking about… Disappointingly I felt that most of the moments shared between the main characters, went this way. Almost as though someone, somewhere along the way wrongly assumed that the amazing chemistry between them would be enough to float the film along.

I will admit, without giving anything away, that as the more emotional parts of the film progress—it almost worked. I was swept up in the heartache and redemption, but once the credits rolled, and I had time to process the film in it's entirety, I realized that although their relationship had eventually moved me, I still couldn't understand how it had begun in the first place. The early part of their romance was acted out as though it were scripted as so, and that just isn't quality work.

Overall, I would say, though not the best quality film out right now, the chemistry between Richard Gere and Diane Lane does somehow, eventually, make it work. If you need an escape that is a tear-jerker not to be taken too seriously, than go ahead. Otherwise, wait for the DVD…

Negative
Negative—I have not read Nicholas Sparks’ book Nights in Rodanthe, so I do not know how much the movie follows the book. Thinking that this Sparks story might have some Christian value, I made the mistake of watching this movie that actually has a terrible moral message. The title of this movie should be “A Drunken Fling in Rodanthe.” Adrienne's husband made a terrible mistake by breaking his marriage vows by unchastity. At the beginning of the movie, he is seen seeking reconciliation with a repentant attitude. Paul, broke his marriage vows through workaholism. Why we are to think that Paul deserves redemption through this weekend fling, therefore heading to totally break any chances of reconciliation with his wife or Adrienne with her husband is the movies biggest lie. I am sorry I wasted my time with this movie and would warn others from absorbing this most evil lie that the grass is greener on the other side of the fence.
My Ratings: Moral rating: Offensive / Moviemaking quality: 4