for a scene of sexuality. 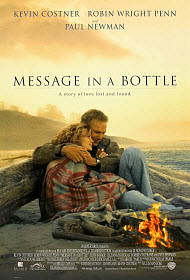 “a story of love lost and found”

Have you ever thought of tossing a bottle into the sea, with a note lodged securely within its confines just to see what happens or where it will end up? Everyone loves the mystery and romance of the idea… one as old as bottles themselves. As a junior high student in Virginia, one of my friends tried an experiment like this and was pleased to have it travel many miles down river before being picked up by an anonymous receiver. His story made the paper. So did the story within “Message in a Bottle”, starring Robin Wright Penn and Kevin Costner. From love lost to love found, this tale of two lovers gives both sorrow and happiness.

Theresa Osborne (Robin Wright Penn) is jogging on a beach one day when she discovers a message in a bottle. Immediately she opens it and reads the letter and is so enraptured by the depth of feeling and emotion the author conveys that she allows this message to encompass the next many months of her life. She shares the very personal note with everyone she knows, and even the Chicago newspaper she works for decides to reprint the message. Through a quick process of discovery, two other similar notes turn up from various points on the Atlantic Seaboard, all with the same possible author. Eventually, a name and address is tracked down and Theresa personally goes to visit the author—a man she has already come to love without even knowing.

Garret Blake (Kevin Costner) is the obvious author. A reclusive widower of two years living in the Carolinas, he is still mourning the death of his wife and intent of keeping every reminder of her intact… even to the point of leaving her belongings exactly as they were when she passed away. Garret is not a charming man any longer, and is very awkward at meeting Theresa. Over time, they begin to love each other and, as their romance furthers, the pain and misunderstandings surface. Theresa battles within herself about telling Garret that she found his letters, meant never to be read by a person but rather written as if to the sea itself. Both have had their share of grief, but both also find comfort and understanding in each other.

“Message in a Bottle” contains one scene of sexuality (a bedroom scene) and several instances of profanity. There is no nudity, though one shot of Robin in her underwear (with a shirt on). Garret and Theresa do not seem to think twice about sharing the night with each other, though this was not a “hop in to bed” type of film. There were a few supposed “words of wisdom” offered during the film about love and relationships, though some of them were far from a Biblical view. One in specific taught that we all have our little white lies and secrets, and that’s okay. Of course, the Bible teaches us to be honest with everything and everyone. There was one fight scene involving Garret, but in the end amends were made in this emotional tale.

The coastal photography was stunning, with some great shots of foaming whitecaps, classic wooden schooners, and a cozy little seaside town. While the story does lag in places, it was not disappointing. A theme of growth, coping with loss, and reconciliation was present throughout the film. Be ready to shed a few tears if you plan to see this with someone you love.

Up until a point, I thought “Message in a Bottle” was cute and well written. An enjoyable storyline, likable characters, and a wondeful acting job by Costner and Wright. I was, however, very disappointed in the language, (especially the use of the Lord’s name in vain several times) and the scene of sexuality. There were no regrets or consequences in sleeping together, and that’s not always true. That was a scene that could have very easily been left out, and ruined the movie, in my opinion. However, I was bawling by the end, so if you see this movie, be prepared. From a Christian point of view, I can’t recommend it. My Ratings: [2½/5]

Annie, age 21
Felt it was a basically good movie with a good plot leading up to a dramatic love story with the fairytale ending. Truly disappointed in the ending which ruined the movie for us. Kevin Costner did an excellent acting job. Several scenes might be quite objectional to Christian viewers (sexuality, fornication, obscene language, and God’s name taken in vane quite often).