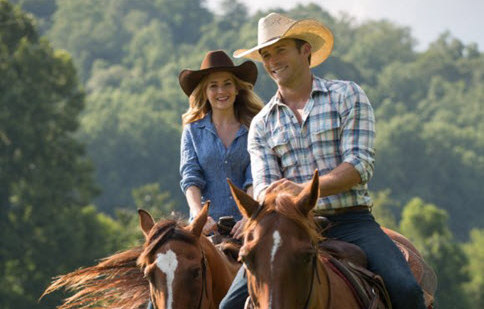 for some sexuality, partial nudity, and some war and sports action. 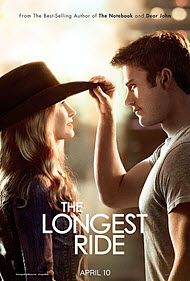 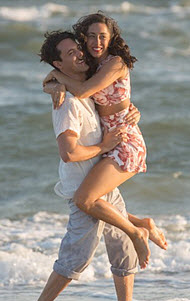 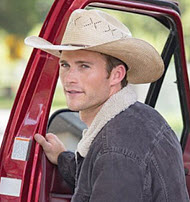 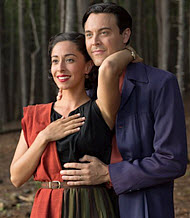 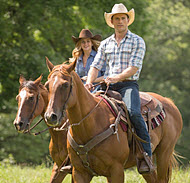 difficulties in returning from war

being unable to have children because of a war wound 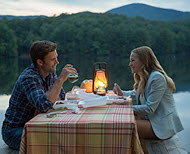 premarital sex—having sex before marriage / about fornication in the Bible

“The Longest Ride” starts off as your average sappy, syrupy-sweet romance novel adaptation flick, but takes some twists and turns along the way that make the journey more worthwhile than expected. Luke Collins (Scott Eastwood) is a handsome bull-rider who is desperately trying to revitalize his fledgling career. Upon returning from a year-long absence due to severe injuries sustained from being thrown from a bull, the North Carolina native meets Sophia Danko (Britt Robertson), a soon-to-be college graduate with plans to pursue a career in fine arts in New York.

After a romantic picnic in the woods sets the stage for a picture-perfect romance, something startling happens. Luke spots a car that has hit the guard rail and careened off the road. He and Sophia see that the car is engulfed in flames, and leap from Luke’s truck and towards the burning vehicle. Our handsome hero runs to the rescue of the elderly man trapped in the front seat, who has lost consciousness. Coming to, slightly, the old man can only manage to muster the word “Box.” Looking around inside the front seat, Sophia quickly spots the box the old man was referring to, snatching it up and running after Luke, as he valiantly carries the elderly man back up the hill to safety.

Luke and Sophia are able to drive the elderly man to the hospital, and, while in the waiting room, Sophia looks through the contents of the mysterious box. Therein she finds old photographs and letters from the elderly man to his beloved wife, Ruth. Little does Sophia know at the time that she and the box’s owner, Ira, will strike up a beautiful friendship, as she stays by his bedside and reads his inspiring and precious letters to him.

As Sophia reads the letters, the audience is transported back in time to the 1940s, and learns the story of Ira and Ruth’s love, which is filled with joy, happiness, enthusiasm, and also marred by war and tragedy. By reading the letters and gleaning wisdom from the love story of Ruth and Ira, Sophia learns what really matters most in life, and what it means to truly sacrifice for the one you love.

The best line in the movie states, “Love is sacrifice.” There are several examples of sacrifice in the film, which are very inspiring to see. Luke risks his life to help the elderly man, Ira, out of the burning car. Sophia sacrifices her time to go and be with Ira and read to him as he recovers in the hospital. When Ira goes to war, he hears a friend crying out for help and has the choice to either stay in the trenches where it is safe or go out in the open and rescue his friend. Ira chooses to rescue his injured friend, even though it means he may be killed himself. This shows tremendous sacrifice.

Upon returning home, Ira is not the same. Because of an injury and subsequent infection, due to being shot while saving his friend, Ira cannot give Ruth a child, as she so desperately wants. However, Ruth decides to marry Ira in spite of this, because she loves him.

More sacrifices are made with the main characters, Luke and Sophia, toward the end of the film, as well. Of course, we know that the ultimate sacrifice was Jesus” death on the cross for our sins. John 15:13 says,

“Greater love has no one than this, that he lay down his life for his friends.”

Any sacrifice that we make for another is only a reflection of what Jesus has done for us, because He shows us the ultimate example of what true sacrificial love means.

It is very unfortunate and sad that this film has so much sexual content interspersed within the story. The story itself is so sweet, and many of the moral aspects are so pure and lovely that the graphic sexual escapades of the characters feel very out of place. In the beginning, the sorority sisters who Sophia lives with are seen walking around scantily clad. While this is unfortunately to be expected, we also cannot escape the sensuality even in the 1940’s flashbacks, where Ira and Ruth are shown kissing on the dance floor—something that would have been very frowned upon back then. Instead of waiting until marriage, Ira and Ruth have premarital relations when Ira returns from the war.

In the modern storyline, Luke and Sophia start off taking things slow—for about one date. By the second date, they are already getting to know each other on way too intimate of a level. After going horseback riding together, Luke takes Sophia back to his place, a bachelor-cowboy-pad in a barn that looks a little too perfect. She has conveniently fallen into a river and gotten all muddy, so he lets her know where the shower is located and offers to make her some soup, but somehow they end up in the shower together. The shower scenes show a sexual encounter that is not at all needed and does not even make sense in the film. After this scene, there are several other scenes that show Luke and Sophia being intimate together before marriage, and all these scenes glorify premarital sex by making it look like there is nothing wrong with it, and even normalizing it.

However, the Bible has much to say about sexual integrity and purity that we should be aware of. 1 Corinthians 6:18-19 says,

“Flee immorality. Every other sin that a man commits is outside the body, but the immoral man sins against his own body. Or do you not know that your body is a temple of the Holy Spirit who is in you, whom you have from God, and that you are not your own? For you have been bought with a price: therefore glorify God in your body.”

Although the theme of sacrifice is prevalent throughout the film, it is ironic that when it comes to the area of sexuality, none of the main characters are willing to sacrifice their desires for the moment in order to live in purity and integrity before God. The sexually graphic nature of the film prevents me from being able to recommend it to Christian audiences. There are also several vulgar words in the film, which we need to be wary of as Christians. We need to remember Ephesians 4:29 which says,

“Do not let any unwholesome talk come out of your mouths, but only what is helpful for building others up according to their needs, that it may benefit those who listen.”

“The Longest Ride” is much more enjoyable and thought-provoking than I had anticipated. There are some plot twists, lots of heart-warming, tear-jerking moments, and even a couple of laughs. The flashbacks to the 1940’s are also done surprisingly well, with period-correct backdrops, houses and clothing, and that was fun and interesting to watch. Unfortunately, though, this film is not unlike other adaptations of Nicholas Sparks” books, which incorporate gratuitous sexual material along with the sweet and touching love story. Due to the graphic content, I cannot recommend this movie to Christian audiences, but I can say that if this movie were made without those scenes (which could easily be done, and would actually make more sense), the film would have the potential to be truly wonderful. So, unless you are able to rent the film and fast-forward past the suggestive scenes, you may want to skip this otherwise touching and lovely ride.

Negative
Negative—The story line and movie itself was good, but there were too many sexual encounters throughout the movie that were unnecessary. If you don’t agree, try sitting through it with your kids. The movie starts out with an older cowboy meeting a young college sorority girl, within days they are in bed—she stripping in front of him, knowing full well that she will be leaving town for good at the end of the month. There were an innumerable amount of in your face up close kisses.

It’s too bad they have to shove this inappropriateness on movie goers and our children. If they had eliminated this, I would say it was a good movie. It’s another example of media pushing their agenda of promiscuity and premarital sex on the next generation.
My Ratings: Moral rating: Offensive / Moviemaking quality: 5

Lisa, age 39 (USA)
Negative—The film starts off rocky with the female star character joking about not wearing underwear in the first few minutes of her date. It quickly goes downhill even more when premarital sex takes over the couple’s second date and several other dates afterward. The film ends with the couple stripping down to their underwear to jump into a lake. That scene has been done so many times in movies it’s trite, not to mention uncomfortable depending on who’s viewing it with you.

I’m getting to the point of giving up on watching modern-day romance movies—too immoral and so tired of it. What message does this send to adolescents??? I think we already know the answer—we see the effects all around us.
My Ratings: Moral rating: Extremely Offensive / Moviemaking quality: 4

Ann, age 40+ (USA)
Movie Critics
…“Longest Ride” turns into a sweet trip… Alan Alda lends a touch of class… safe, sweet, predictable entertainment with reminders that love often means sacrifice, and that happiness can come from focusing on what you have rather than what you lack. … [2½/4]

Barbara Vancheri, Pittsburgh Post-Gazette
…one of the best, most powerful and uplifting adaptations of a Nicholas Sparks romance novel, but its moral worldview extolling marriage and commitment contains some false thinking about love and art, plus some foul language. [4/4]

Ted Baehr, Movieguide
…A chance to check out up-and-coming actors in cloyingly calculated performances… this by-the-numbers romance between oddly mismatched lovers plods along in a way that will nonetheless provide the cinematic equivalent of an agreeable airplane novel read for the already converted. …

Todd McCarthy, The Hollywood Reporter
…Eventful, polished, and knuckle-bitingly dull… Their story is intended as an example to the young folk of how love requires sacrifice, though the movie’s ridiculous ending also allows for lucrative miracles. [1/4]

Liam Lacey, The Globe and Mail
…Sparks works up to an ending that’s as shamelessly preposterous as it is predictable. George Tillman Jr., who directed the underrated “Men of Honor,” makes this all a fairly painless experience, with the help of some nice period detail and very solid performances by Huston and Chaplin. [2/4]

Stephen Whitty, The Star-Ledger (New Jersey)
…“Longest Ride” is funny, but oops … it wasn’t supposed to be… Everything in the movie is suffused by a vision of life that is resoundingly and evidently false, but as this vision is not repulsive, but is intended to reassure, the lies don’t produce anger or frustration. No, they bring on the laughs. …

Mick LaSalle, San Francisco Chronicle
…This love story between a rodeo rider and a college student is light on romance and heavy on the bull. … [1½/4]

Connie Ogle, The Miami Herald
…The two-plus hours is mostly marked by an emptiness born of scene after scene designed to blatantly manipulate emotions rather than trigger them. …