also known as “Between a Rock and a Hard Place,” “127 klukkustundir”
MPA Rating:

for language and some disturbing violent content/bloody images. 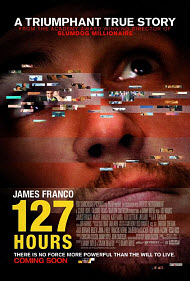 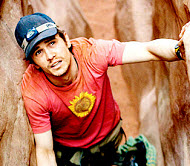 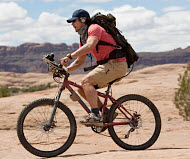 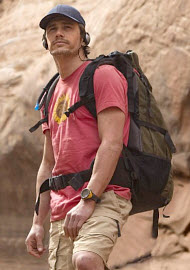 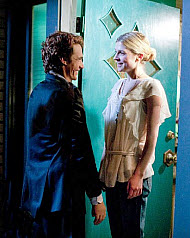 deserts in the Bible

Bicycling across desert wastelands? Scaling canyon walls? Free-falling into an underground lake? These are all activities that come easily to nature-lover and amateur adventurer Aron Ralston (James Franco). One April in 2003, though, a hike through Blue John Canyon, Utah, turns into a nightmare, when Aron falls into a ravine and finds his arm pinned to the canyon wall by a large rock. Hours turn to days as Aron frantically tries everything within his power to free himself, while trying to survive in a harsh environment without much food or water. Slowly slipping into delirium, Aron eventually begins to remember things and people in his life that he thought he had forgotten or that he had taken for granted and finds the strength within to do the impossible and make it through those 127 terrible hours. Based on an incredible true story and the book, Between a Rock and a Hard Place, written according to the video diaries Ralston made during his ordeal.

Directed by Danny Boyle, acclaimed moviemaker behind 2008’s Slumdog Millionaire, 127 Hours is a visual marvel. The scope of the barren Utah wilderness is at times both breathtaking and frightening. The cinematography is a mix of traditional filming and the shaky hand-held camera effect, which is thankfully not overused. James Franco, alone for much of the film, turns in a fascinating and intense performance. In terms of content, though, “127 Hours” more than earns its R-rating.

There is plenty of foul language, including F-words and S-words and a number of misuses of the Lord’s name (unfortunately, the only spiritual content). Sexual content is somewhat heavy, but mostly implied. Aron remembers when he and a bunch of young people, both girls and boys, strip off their clothes and hang out the windows of a car, shouting uproariously (no explicit nudity). Later, in that same car, sex is implied between him and a girl he met there (again, no nudity, but the girl moves her hand along his chest and down beneath his blanket, after which the scene ends). Towards the beginning of the film, Aron meets two hikers (played by Kate Mara and Amber Tamblyn) whom he convinces to strip to their underwear and swim in an underground lake. Later, while trapped, Aron watches footages of this on his camera and is tempted to act out his lust by pleasuring himself, but resists.

It is in the blood and gore category, though, that the film proves that it is not for the faint of heart. Aron’s initial fall and the crushing of his arm leave a bloody smear on the rock wall. Through the course of the film, Aron is forced to stab himself in the arm with a pair of pliers and drink his own blood. To survive, he also drinks his own urine (and eats his contact lenses). He almost drowns in a flash flood. Eventually, Aron is forced to cut off his arm with a blunt knife, the process of which involves first painfully and loudly breaking his arm in two places and then carving through muscle and tendon in an excruciatingly bloody and realistic sequence, from which the camera rarely turns away .

In spite of these things, Aron learns some powerful life lessons that audiences can take away from his experience. Aron realizes that his own pride and sense of self-importance led him to his situation, because he considered himself above telling friends or family where he was going, choosing instead to rashly set out on his own into a potentially dangerous wilderness. This pride caused him to take for granted those who loved him, especially his parents and his old girlfriend, long before he ever went on his adventure, and he apologizes to them and expresses his appreciation and love for them through his camera. Indeed, it is the flashbacks to and delirious visions of his times with his family and friends that keep him strong and prevent him from losing his focus altogether. Bearing a powerful message of its own, it is a vision of himself spending time with a potential future son that gives him the strongest boost of courage and hope that he needs to survive.

Ultimately, then, “127 Hours” is a harrowing story of the human will to survive and the importance of the people and relationships in our lives. It is a film that grabs hold and never lets go, until its gripping conclusion. However, it is certainly not a film for everyone and has too much blood/gore and immoral content to warrant a recommendation, except for the most discerning viewer with a strong stomach.

Positive
Positive—This was an excellent movie. It tells the true story of Aron Ralston and his ordeal of being trapped. It goes through his story, his emotions, and finally his escape. It is definitely harsh, but what a great story. There wasn’t any nudity or sexual scenes, but there were several F bombs. Great movie, worth seeing. The only disappointment was he gave no glory to God, and there was no reference about Christ.
My Ratings: Moral rating: Average / Moviemaking quality: 4½

Terry, age 43 (USA)
Positive—This movie makes one think about life more deeply than some do. When Aaron is trapped and close to dying, he says: “This rock has been following me since the day I was born…”—that was the turning point, his realization that he did not have it all together like he thought. He was, maybe for the first time in his life, appreciating life itself, his parents—and acknowledging his selfishness and stupidity. When he finally gets free, he looks up and says “thank you”—looking out of himself.
My Ratings: Moral rating: Better than Average / Moviemaking quality: 3

Paolo Geminiani, age 54 (Austria)
Positive—This was possibly the best film I saw this past year and certainly the most intense, and it’s one you’ll be talking about for long afterward, raising questions about what’s most important in life and how we can respond to adversity. The R rating is for blood and language, neither of which is gratuitous. I found it inspirational in an unusual sort of way—there’s definitely a pro-family message here and ***MILD SPOILER AHEAD*** the main character even thanks God for the resolution to his problem. ***END SPOILER***

But the film is definitely not for the squeamish (and I confess I closed my eyes for a few seconds).
My Ratings: Moral rating: Average / Moviemaking quality: 4½

Gregory R., age 30 (USA)
Neutral—I came away rather disappointed from this movie. I had just seen “The King’s Speech” in which so many emotions were evoked from a man overcoming a stammer to deliver a speech. I expected a huge range of raw emotion from this much more dramatic situation. Despite what the reviewers are gushing about, I see a very limited range of emotions and thought. I saw pride, selfishness, arrogance, courage, fear, elation and relief at the end. But wouldn’t anyone… even a super macho American man… shed tears, be wracked with sobs of fear, pain, frustration, defeat? This guy did no such thing, even as he was cutting off his arm! It’s like he never let down his complete self-possession and self-control for a minute.

Wouldn’t even an atheist wonder about what awaited him after death? And even a devout Christian would at some point have blamed, even hated God for putting him in that situation. How about pleading, begging for his life? Making promises, bargains with God or fate? Aaron was just too dignified and self-possessed to descend to that, it seems. The only vulnerability shown on screen is physical.

Can anyone really be so completely absorbed in the mere physical and material, to the exclusion of the spiritual, even when faced with death? And was the superhuman act of cutting off his own arm really due only to his own physical strength and will to survive?

The filmmakers are so determined to exclude God and the spiritual part of a human being, that when he says “Thank you” in the end, he was addressing the rock! I do not recommend this movie at all. It’s empty of any meaningful message.
My Ratings: Moral rating: Average / Moviemaking quality: 4

Sally, age 58 (Philippines)
Negative
Negative—I decided to watch this movie as I have seen the ads on tv. I couldn’t bring myself to watch the entire movie because I have had my right arm amputated via a windshield in a car crash (ripped it clean off). I got to the point where he started to saw his own arm off and ran out of the theater to the nearest bathroom to vomit. If you are an amputee, I urge you not to view the film. Or at least bring a paperbag to vomit into.
My Ratings: Moral rating: Extremely Offensive / Moviemaking quality: ½

Johann, age 18 (USA)
Negative—Ouch, this movie was way too tough to watch. I honestly could not finish it, it was so painful. Why watch this man for an hour be trapped for 6 days with hand lodged between a rock, and then saw it off? It was torture and left a negative feeling. Don’t waste your time. It’s pointless. Sure, the message is: persevere, do whatever it takes, but you don’t have to sit through the torture of this movie to learn that!
My Ratings: Moral rating: Offensive / Moviemaking quality: 3

Luke Y. Thompson, E!
…Hiker’s ordeal makes a captivating saga of survival… It’s a coming-of-age story—blunt, mythic, gut-wrenching. … It is not for the squeamish. …

Carrie Rickey, The Philadelphia Inquirer
…dazzling and utterly riveting… the screenplay by Boyle and his “Slumdog” collaborator Simon Beaufoy specifically omits the conversations with God… that Ralston mentions in the memoir—Between a Rock and a Hard Place—that the movie is based on.

Lou Lumenick, New York Post
…Danny Boyle and James Franco take us on a memorable thrill ride. … Boyle is such a gifted director that he overcomes the obstacles and might even match the commercial success of his earlier Oscar winner. …

Stephen Farber, The Hollywood Reporter
…“127 Hours” takes the adrenaline rush one step further, pitting man against nature in the most elemental of struggles as Boyle compresses the true story of rock-climbing junkie Aron Ralston, who spent five days wrestling with a boulder after a rockslide pinned his arm against a canyon wall, into an intense 93 minutes. …

Peter Debruge, Variety
…An inevitable question is whether the movie is completely unsparing in its climactic details. The answer is not completely, though a couple of men passed out at one screening. Another question is whether the filmmaker and his star have managed to transcend the visual and dramatic limits of what would seem to be a singularly confining story. The answer to that is a resounding yes. Mr. Franco is simply terrific, and Mr. Boyle’s trademark exuberance creates a dizzying succession of images that get the movie not only out of the canyon but into its hero’s mind. …