for violence, pervasive language and brief drug use. 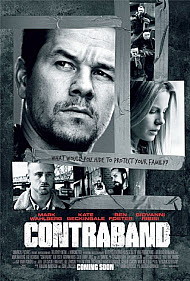 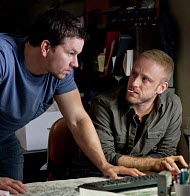 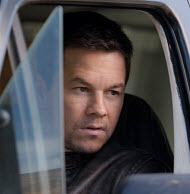 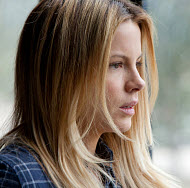 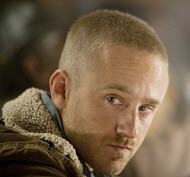 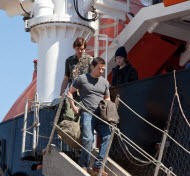 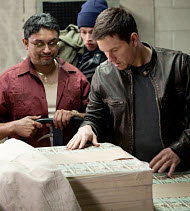 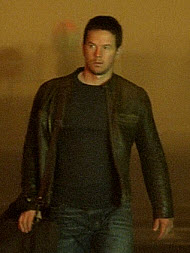 “What would you hide to protect your family?”

Starting right off the bat, the first scene sets up our eyes and ears for entry into the world of illegal drugs and big money. A barge boat with large metal containers in New Orleans is surrounded by police in helicopters and boats with the intent of catching criminals with illegal contraband. The two men on the boat quickly dump their stash of cocaine into the bay, which sets into motion the premise of the film—a man in trouble who needs help in getting out of it.

Andy (Caleb Landry Jones), the brother of Kate Farraday (Kate Beckinsale—“Underworld,” “Aviator,” “Van Helsing,” “Pearl Harbor”) who is married to former smuggler gone clean, Chris Farraday (Mark Wahlberg—“The Fighter,” “The Departed,” “Shooter,” “Max Payne”) is the man in trouble. When it comes to light that Andy has dumped the cocaine, the crime boss, Tim Briggs (Giovanni Ribisi, “Avatar,” “Saving Private Ryan,” “Gone in Sixty Seconds”) beats him savagely landing him in the hospital. Chris and Kate learn of his fate and rush to the hospital to find out what happened. Andy relates to them that Briggs wants the $700,000 that was paid for the cocaine. Chris tells Kate that he is not going to get involved but he is going to take care of the problem.

Here begins the main thrust of the entire movie—a bad guy trying to be good—Chris has an alarm company business and a wife with two boys to watch over. Although it is hinted that he “misses” the action of the “good old days”, he has cleaned up and become a viable hard-working, honest man.

Proverbs 1 has several verses about shunning evil. Verse 10 states, “My son, if sinners entice you, do not consent.” Verses 15 and 16 state, “My son, do not walk in the way with them, keep your foot from their path; For their feet run to evil, and they make haste to shed blood.”

Chris knows in his heart that he should stay away from the “life” he used to be involved in, but his need to help his brother-in-law overcomes the need to stay out of trouble. He then begins a plan to somehow find a way to pay back the money and clear Andy. Chris locates his best friend Sebastian (Ben Foster—“3:10 to Yuma,” “The Mechanic,” “The Messenger”) who is attending an Alcoholics Anonymous meeting, and asks for his help. He decides to travel to Panama with a “team” of past crime pals to do one more “run.”

As the team lands in Panama, not everything works out as planned. As Chris meets with the head man in charge, Gonzalo (Diego Luna—“Y Tu Mama Tambien,” “Milk,” “The Terminal”), things start to get heated up and Chris is forced to make decisions on the fly if the team’s mission is to succeed. While all of this is taking place in Panama, back home Kate is dealing with problems of her own. Sebastian is acting as her protector, but things aren’t really as they seem. Kate and the boys begin to be in danger as a result of Chris being put into the position of “Savior” for Andy. Chris is challenged long distance to keep Kate and his boys safe and sound, make his way back without being killed, and successfully find a way to “buy” back Andy’s life.

There is a world of violence in this movie. From gangsters threatening and beating each other up to Kate having her head smashed into a mirror and bloodied, as well as a bathroom scene where she is slammed against the wall. Men are shot and killed in a gunfight and Gonzalo is shot in the neck with blood flying all over. No young children or young teens should see this movie.

The language has the “F” word in every other sentence well over 100 times. Of course, there were the other usual bad words to go along, s__t, assh_le, b_tch, etc. There were also some slangs of “mick, pissed, d_cking around, p_ssy, and a vulgar word for a woman’s vagina. Jesus and Jesus Christ were also used as slang.

There is a scene where Kate is victimized by unwanted sexual advances but nothing comes of it. Thankfully, there were no other sexual scenes except Chris and Kate kissing deeply and suggestively.

There was drinking and one scene showed Sebastian snorting cocaine.

All in all, I actually enjoyed how the movie was made with all of the detailed shots of the barge and its riggings. The scenes of New Orleans and Panama kept me involved in the movie, never letting me go for one minute. The back and forth scenes from the barge to back home with Kate, made the movie flow. I do think a little more development into the characters of the team would have been good, they didn’t have much depth. I also thought Kate was a little shallow, can’t put my finger on why I didn’t like her character. She wore a cross around her neck, but I did not detect anything spiritual about her.

It also made no sense that Sebastian was attending an AA meeting, yet was drinking and snorting cocaine—perhaps he was meant to portray a man in torment from his demons and not being able to overcome them. Galatians 5:17 says it all, “For the flesh lusts against the Spirit, and the Spirit against the flesh; and these are contrary to one another, so that you do not do the things you wish.” As one of the AA members remarked, maybe Sebastian needed to “let go and let God.”

The main thing that bothers me about movies like this is that they seem to “promote” crime and the making of big money by illegal means. I want the movie to end well, which it did, but not at the expense of crime being a legitimate means to that end.

Mark Wahlberg movies are some of my favorites. I have read his brief biography and know that he had a very violent and troubling youth. Perhaps that is why he seems to gravitate towards movies of this caliber where individuals start out wrongly, but somehow find a way to improve. With that being said, in his personal life, he espouses a belief in God and gives glory to Him for his life change. Could some of that have been included in this movie in some way?

Negative
Negative—I do not want to write a lengthy explanation of the movie making quality or speak of the excellence of the actors, but I will say this, if you are sensitive to foul language, this would not be a movie to attend. I lost count of the numerous times the F-word is used. MF- word was also used a couple of times. I don’t understand why this is necessary, but it just solidifies the reason why I will not be attending R rated movies anymore. It seems that a lot more people would attend movies, if the language was not so awful, than people that would say “you know what, I am not going to that movie because there is not enough cursing in it.”
My Ratings: Moral rating: Extremely Offensive / Moviemaking quality: 4