for strong bloody violence, language, drug use and some sexual content. 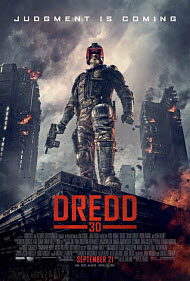 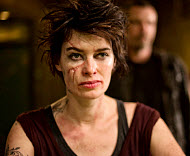 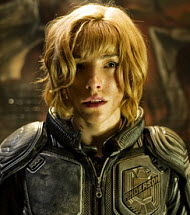 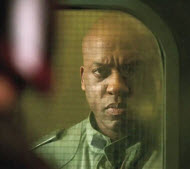 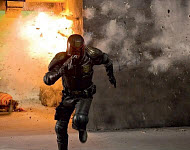 Remaking a film like “Judge Dredd” sounded pretty ridiculous when the rumors began. There’s a long list of movies Stallone did in the 80s and 90s that definitely didn’t create any Oscar® buzz, but “Judge Dredd” with it’s ridiculous one liners, hokie story line and overly serious comic book theme definitely took the cake (perhaps only challenged by the arm wrestling epic “Over the Top”). My friends, “Dredd 3D” is not the silly comic book flick you saw in 1995. It’s loud, violent, and gory. Bottom line: Dredd is a bloody mess.

The story revolves around an officer of the law (Dredd) on another day on patrol with a new partner in “Mega City 1,” a futuristic city that spans the eastern sea board and is inhabited by millions of people. Things go south when the two proceed to investigate a triple homicide in a rougher part of town. What ensues is nothing short of a massacre.

The film is highlighted by almost a noire-esque style that accentuates the slow motion and 3D effects with great precision. The visuals that result are astounding and breathtaking, at times, but will make you cringe. When bullets fly and hit skin, there’s no cut away. Droplets of blood are literally suspended in mid air thanks to 3D technology, and the result will make you wince. To try and describe the violence would be overkill. Men are shot, skinned, blown up, thrown from roofs… It’s certainly not for the faint of heart.

The sexual themes of Dredd are prevalent, as well. Multiple sexual scenes, mostly involving a criminal and a fantasy he is having about Dredd’s female partner, are graphic and intense and appear sporadically throughout. While sex isn’t a focus in the film (how could it be with so much shooting?), it’s a notable addition to the adult themes in the film. There are many moments where characters use coarse words to describe situations: f____ (41), s___ (11), a__ (2), G__ and GD.

To describe Karl Urban’s acting job as a success would be an interesting statement, considering you never actually see his face. He is certainly a good choice for the role, and hearing him gruffly rasp out “I am the law” is by far the high point in the film, but it’s clearly an easy character to portray that I would say is, quite possibly, even less than one dimensional (half dimensional?). The supporting cast is mostly filled with clichés and cookie-cutter characters, but Lena Headey (“Terminator: The Sarah Connor Chronicles” TV series) is an outstanding antagonist.

While the action sequences are truly exciting, and the film, as a whole, is heart pounding to watch, the violence is so extreme it’s very difficult to recommend. Coupled with the drug use, the sexual overtones, and the language, “Dredd 3d” earns its “R” rating within 15 minutes of its short run time. And, with no other uplifting or positive moral themes, there’s little reason to see it, as Dredd is nothing but a bloody, brutal shooter with a thin plot that relies solely on gun powder and violence to propel it forward. So if you’re not looking for a film that leaves death, debauchery and destruction in its wake, Dredd simply is a remake you’ll want to pass on.

Positive
Positive—Dredd is not just God. He is the law. In this film, Dredd deals with sinners with the righteous hand of God (otherwise known as the Fist Of Dredd), and his Lawgiver, which all true believers know to be the true Excalibur. He is not without compassion, as he does strive to save the innocent from damnation (and shaved-headed punks with automatic weapons). A truer parable of God’s work has yet to be created (except, of course, the original comics, where he arrested the devil himself and sent him to prison).
My Ratings: Moral rating: Excellent! / Moviemaking quality: 5

Joe, age 70 (USA)
Neutral
Neutral—Wow. That is all I can say. “Dredd” was truly soul-crushing. The violence was very disturbing. And although they don’t show the (elderly) men being skinned, it shows the bodies fall and hit the floor (in slo-mo) with a splat from 20 stories up. All the violence was very realistic, and even though I was watching it on an iPod, I was still wincing like all the viewers in the 3D theater.

Aside from that, the language wasn’t as bad as typical R rated movies, not as frequent. And the sex dream is implied, rather than shown. Great plot! Haven’t seen the old version, will get on it. All in all Dredd is not for the faint of heart.
My Ratings: Moral rating: Offensive / Moviemaking quality: 5

Tony, age 40 (USA)
Negative
Negative—My husband and I sat down to watch Judge Dredd in 3D thinking it would be like the old one. Well, we got up and left within 10 minutes of the movie. I guess when a movie has demonic trailers before the actual movie starts; kind of opens you up to what you will be seeing. With that, I will say this. If you are a spirit-filled (Holy Spirit) Christian then you too will not like this movie. I was deceived in thinking that it was like the old one. The 3D is in the movie to emphasize the sick and twisted generations that wants to see up and close violence. The scenes were graphic, showing every bullet impact with blood splatters in slow motion in people’s abdomens, faces, etc. They even showed drug use and used profanity profusely throughout before we got up and left. In a nut shell, perverted.
My Ratings: Moral rating: Extremely Offensive / Moviemaking quality: 2½

Helen, age 38 (USA)
Negative—I loved the original Dredd movie. So naturally when I heard they were making a new one I wanted to see it. But upon seeing the trailer I realized three things. The new Dredd has a ridiculous sounding voice that isn’t the same without Sylvester Stalone. And more importantly I could tell it would have lots of swearing among other things. Which kind of turned me off. And, of course, the only reason it was liked by some was the fact it over used slo-mo shots. Without them I doubt it would have gotten any good scores. It’s Hollywood just trying to get you to spend money on garbage.
My Ratings: Moral rating: Extremely Offensive / Moviemaking quality: none

Manohla Dargis, The New York Times
“…Dredd retains the extraordinary violence (flesh pierces rippling bare flesh in loving slo-mo, a machine gun reduces a head to a pulp, and bodies spiral through 200 storeys before splatting), but the action is rather more circumspect and workmanlike  there are no dizzying camera moves, no sense of building momentum or mounting danger. …”

Chris Hewitt, Empire
“…yes, ‘Dredd 3D’ is better than Sylvester Stallone’s 1995 vehicle Judge Dredd. But that’s like saying Taco Bell is better than a 7-Eleven taquito — sure, one is slightly more digestible than the other, but they’re both mass-market junk smothered in cheese, and neither is very good for you. …”

Barry Hertz, National Post
“…slow-motion three-dimensional footage of a future-world crack-smoker getting his jaw shot off in a leisurely shower of spouting blood. … very slick F/X (the 3-D is very good)…”

Gary Thompson, Philadelphia Daily News
“…Have we been reduced so far down to the lowest common denominator that we require an R-rated corpse-and-corpuscle festival to tell us we're more than the sum of our parts? A dreadful notion, that. …”

Paul Asay, Plugged In
“…You’ll ‘Dredd’ this disaster… it’s hard to care which faceless authoritarian maniac shoots which faceless authoritarian maniac. All I wanted to do was escape from this aggressively ugly world and its equally unattractive characters. It’s not that the movie is in bad taste or cheesy (though it is) but that all of its hyperviolence adds up to nothing: This thing is dedd. …”