Step Up Revolution also known as “Step Up 4”

for some suggestive dancing and language. 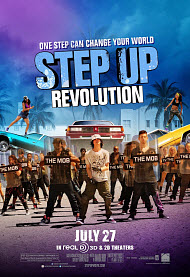 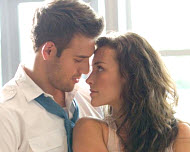 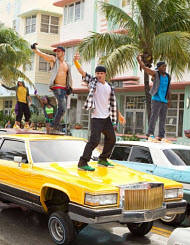 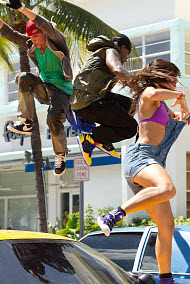 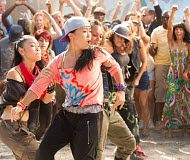 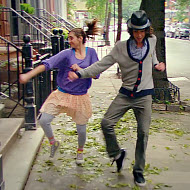 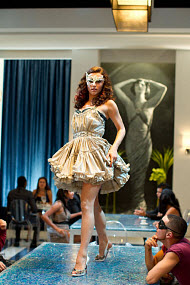 LACK OF CLOTHING—Why are humans supposed to wear clothes? Answer

paving over a community’s cultural heritage

fighting for a greater cause

effects of parents abandon their families

“One step can change your world”

The MOB is a dance group from the streets of Miami, Florida. Their one goal? To become the most famous dance group in the world and reach enough hits on YouTube to win the $100,000 prize. However, things are about to change when a hotel owner, Mr. Anderson, threatens to destroy a section of Miami (where The Mob hangs out) to build a luxury hotel in its place. It’s up to The MOB to fight for their home and start… a revolution.

I had not seen the other “Step Up” films, so I did some research before going to see “Step Up Revolution.” Parts of this movie, such as the dancing, are really quite impressive. The different interwove styles and genres of dance are astounding. However, that’s pretty much the only thing that interested me. Not to sound harsh or anything, but I honestly wasn’t interested in the romantic love interest between Sean and Emily (the two leads in this movie). I mean, it was a nice touch to the film, but not what I was looking for.

Cinematically speaking, the acting is so-so. I really wasn’t impressed. The music is pretty good, supporting the exquisite dancing. I saw this film in 3D, and, for me, it didn’t really make a significant difference in appreciating what this film has to offer (although, I must say, some of the 3D was good, in parts). The plot is a bit slow for the first hour. In one part, I found myself slouching in my seat and looking at my watch, wondering how far I was into the movie. Having said that, I still appreciated what this film had to offer and enjoyed most of it.

“Step Up Revolution” has some very suggestive dancing throughout most of the film; some of it I deemed inappropriate. Here are some other things to watch for…

Violence: Minor. One of the main characters, Sean, punches another member of The MOB to the ground.

Sex/Nudity: Moderate. Women are seen, in many scenes, walking and dancing around in bikinis, one woman is seen showering in her bikini. In one scene Sean spills a drink off of a table and while he’s trying to clean it up, moves his hands up Emily’s leg. There are several passionate kisses between Sean and Emily. In one dance scene, by the ocean, Emily’s white outfit becomes wet, and we can see right through her clothing.

LACK OF CLOTHING—Why are humans supposed to wear clothes? Answer

Other: As I mentioned before, there are several suggestive dance routines that are inappropriate for younger viewers. There are also a couple scenes of teen partying, and alcohol is included.

The MOB’s purpose changes in the film. They go from dancing for “creative expression” to dancing for “protest.” In the same way, we are called to fight for Christ in all situations. However, we are to fight for Christ in a peaceful, yet effective manner. This part of the movie may serve as a teachable moment for young children, if you happen to take them, how we are to stand up for Christ, no matter what the cost, just as The MOB stands up for the citizens of Miami.

As I walked out of the theater, there was a family who watched the movie in the same theater. I asked them if they enjoyed “Step Up Revolution,” to which the mother replied, “Yes, I enjoyed it.” As for me? Apart from the suggestive dancing, often skimpy attire, the language and the suggestive sexual content, this movie is okay. I wasn’t clapping at the end or saying, “Man, I can’t wait to get this on DVD,” but my thoughts were, “This was a nice film, but not a great one.” In short, this film may be okay for mature teens and adults who enjoy this kind of acrobatic dancing and don’t mind the overall weakness of the filmmaking. In any case, the movie is too sexually provocative and titillating to receive a recommendation.

Movie Critics
“…a brilliantly choreographed, well-shot and sharply edited treat. … this under-scripted, super-sexy cinematic postcard is the one the tourist board should post on its website.”

Roger Moore, St. Louis Post-Dispatch
“…More is not necessarily better, even when it comes to hot bodies and smooth dance moves. … with the exception of a few notable aerial tricks, Revolution doesn’t offer many stylistic innovations…”

Justin Lowe, The Hollywood Reporter
“…a paper-thin story that plays like a music video on repeat. … if you’re interested in ‘Step Up Revolution’ (1½ stars out of four) for its plot and character development, you’re out of luck. …”

Scott Bowles, USA Today
“…silly bit of summer frippery… first-time movie director, Scott Speer, who can’t coax even a passable performance from his amateurish cast, save for TV veterans who already have the goods. …There’s no help from the script, which appears to have been written on a napkin by high-schoolers on their lunch break. …”

Bob Hoose, Plugged In
“…as derivative as they come… Revolution fails to impress or even entertain beyond its psychotically overchroreographed dance routines. Sometimes less is better—think of, well, everything Gene Kelly ever did, frankly, and you'll realize that subtley and nuance tend to lodge in the cultural mindset longer than Madonna-on-meth-esque overkill. …”

Marc Savlov, The Austin Chronicle
“…They’re good dancers, and well-choreographed. You can see the movie for that and be charitable about the moronic plot. [2/4]”

Roger Ebert, Chicago Sun-Times
“…a dance movie, interrupted sporadically for PG-13 romance, bad acting, ridiculous dialogue… and earnest ‘let’s put on a show to save our homes!’ spirit. … But the dancing will make you sit up and take notice. … [2½/4]”