for some sensuality and violence. 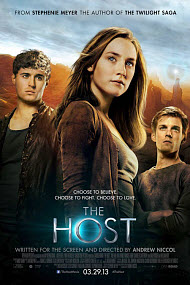 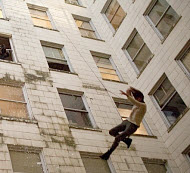 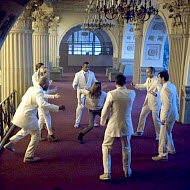 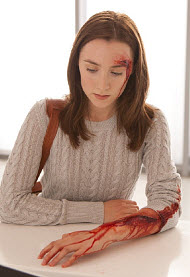 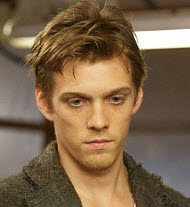 Are there alien beings that can (and do) take control of some human beings, who open themselves up to attack? Yes, they’re called “demons.” 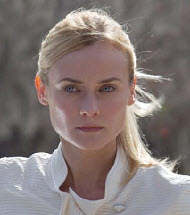 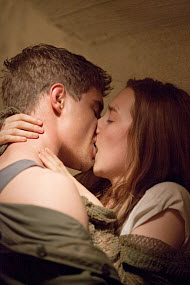 How far is too far? Answer

Written by Stephenie Meyer, the best-selling author of the Twilight series, “The Host” is about an alien species named Souls who occupy different planets and help the worlds reach perfection, but this comes with a catch. During their invasion of Earth, the Souls are inserted into a human host and conquer their minds and bodies, taking away the beauty of free will.

A sparse number of humans remain and are the resistance. One of them is Melanie Stryder (Saoirse Ronan). While she and her little brother are on the run, she meets another free human, Jared (Max Irons). Together they head towards Melanie’s uncle’s hideout, hoping to finally reach safety. Before they make it, however, Melanie is captured. A Soul named Wanderer is inserted into her body, but Melanie’s strong will power allows her to fight with the Wanderer and to eventually earn the alien’s sympathy.

Though written and directed by Andrew Niccol, the film isn’t as strong as his previous films: “The Truman Show” or “Gattaca”. The movie has its positive themes and shows the resilience of the human spirit, but it remains primarily a teen romance with an emerging love triangle. The acting is top notch, but I felt the movie could have been so much more. Regardless though, it’s an interesting movie and a bit thought provoking.

The violence is pretty heavy. Some people commit suicide rather than be taken by the Souls. A father shoots himself (off screen). Two men purposely run their vehicle into a concrete barrier and another throws herself out of a window. After her fall, she lands loudly in the street, and she is shown bruised and bloodied. A Soul wants to be killed after it’s extracted.

A man is shot in the head; he then lies in a puddle of blood. There are several headbutts and punches thrown, and bullets fired. When the humans capture Wanderer, she is slapped twice for being the enemy. Another tries to kill her by pulling her into a river. She later lies to protect her assailant. She is also choked by another male character. Scientific experiments are performed in trying to extract the souls. After the failed extractions, dead humans are shown with slices in their necks, and the Souls are dead on the floor.

At times, Melanie wears revealing clothes, from tank tops to a thin nightgown. She tells Jared that when he touches her, she doesn’t want him to stop. There is one sex scene where she is in a bra, and they kiss in bed. Jared’s back is shown. She kisses her two love interests several times, but she and Jared share the most passionate kisses in the movie.

Although Wanderer is essentially the enemy, the humans slowly give her the benefit of the doubt, and she proves herself to be trustworthy. They show her their secret community within a volcano. Despite losing the battle and nearing extinction, the humans haven’t lost hope and continue to survive and show forgiveness. A slight comparison can be made for people who die for their Christian faith within the pages of our history, and daily in other countries, that aren’t blessed with religious freedom. It reminded me of 2 Corinthians 4:16-18:

I don’t personally recommend “The Host”. Although the focus of the film is more on the romance side, it did bring up the complexity of being a human and having the will to survive. I felt the themes could have been so much stronger, if they would have been more of the focal point. However, the performances are very notable and helped strengthen the film.

Positive
Positive—I loved this movie. I read the book back in 2008 and as a fan, I hoped they would stay true to the storyline. I think it was, overall, a faithful adaptation of the book. The acting was great; Saoirse Ronan did a wonderful job portraying Melanie/Wanda. The pacing was a little slow at times, but a lot of times it was necessary, that way viewers could understand the story easier.

Seeing the movie made me realize even more how much Ian loved Wanda, no matter who she was, which goes to show that love shouldn’t have to be about what’s on the outside, but what’s on the inside. She was an alien from another planet, but he didn’t care. He loved her because of her compassion and honesty. I recommend this movie to fans of the book, as well as non readers. “The Host” is a great movie, and I can’t wait to see it again.
My Ratings: Moral rating: Good / Moviemaking quality: 4

Elle, age 19 (USA)
Positive—It was a good movie, even though it’s not my type. I would let my teenager see it, and she is 13 years old. It was fictional and played with the supernatural, which isn’t the type of movie that I would normally go see, but my 15 year old was dying to go, so I went with her. I wasn’t disappointing. I liked the story line and the plot, even though I’m not sure how much I like the idea of “Souls” coming and taking over. It was relatively clean, aside from the making-out. My 15 year old loved it and I’m sure my 13 year old will also.
My Ratings: Moral rating: Better than Average / Moviemaking quality: 4

Marisa H., age 43 (USA)
Positive—It was a movie that made you think. There are so many possibilities out in the universe and it was interesting to see another persons exploration of those possibilities. Although there were some kissing scenes, the overall movie was a good one and I hope to see it again.
My Ratings: Moral rating: Better than Average / Moviemaking quality: 5

Jenny, age 32 (USA)
Positive—What a movie! It was fantastic! The animation was incredible along with the facts. The movie was played out in such a way that it seemed as though it could really happen. I was thoroughly impressed by the actors and the filming. Aside from the few kissing parts, it was a movie with characters who had good intentions and great acting. I loved it.
My Ratings: Moral rating: Good / Moviemaking quality: 5

KJ Brown, age 23 (USA)
Positive—Nothing much to add to the above comments as far as objectionable material except for noting the brief but obligatory bow to the so-called “Green” movement (“they’re killing their own planet!” or words to that effect). No we’re not. Other than that, fairly entertaining, with a mix of action, drama, some light notes, and, of course, romance. Lots of romance. None of it very objectionable. Just… lots of it. Drumming-one’s-fingers-waiting-for-that-liiiingering-kiss-to-end-so-we-can-get-on-with-the-story lots of it.
My Ratings: Moral rating: Average / Moviemaking quality: 3

Jeremy K, age 57 (USA)
Neutral
Neutral—Overall, the movie is interesting, slightly intense, touching, but too sensual; I had to cut out more then 7 minutes of it to make it appropriate for my 13 year old daughter. ***SPOILER*** The idea of aliens occupying human body is interesting and controversial. If aliens didn’t block the personality out of the existence, I wouldn’t be able to tell if I would prefer them to take over the world or not. ***END SPOILER***

Essentially, they create utopia, which we, as Christians, are looking forward to (perfect world, no lying, stealing, killings, everything is free). But, as movie shows, we, as humans, don’t want that.

Comments from young people
Positive—I loved “The Host”! I’ve heard about it a lot at school, and for my friend’s birthday he suggested we go see it with some of his friends. Well we went, the movie was great! It was sort of a chick flick which was funny. But in the end, I was happy I saw this movie. No zombie apocalypse, but it was like alien abduction. Still a great movie.
My Ratings: Moral rating: Excellent! / Moviemaking quality: 4

Hannah, age 12 (USA)
Comments from non-viewers
Negative—How is this movie any better than “The Hunger Games”? I’m not gonna judge too harshly, seeing as I haven’t seen the movie, but I was reading “The Host”’s storyline on Wikipedia, and it sounds even worse than “The Hunger Games” (which I have seen and read before). And yet this movie got an average rating? I’m a little confused. Because it sounds like “The Host” has far more offensive content in it. I’m not saying it doesn’t sound interesting, but I most likely won’t be seeing this movie.