Dumb and Dumber To

for crude and sexual humor, partial nudity, language and some drug references. 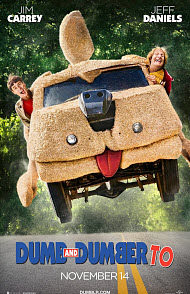 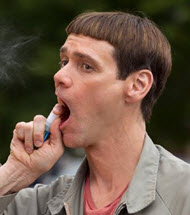 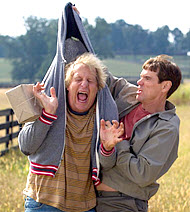 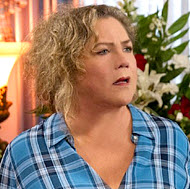 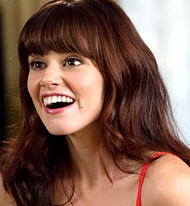 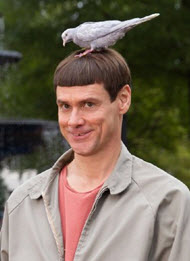 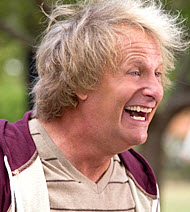 Folks must expect in advance what they are about to experience for nearly 2 hours when choosing to watch a movie entitled “Dumb and Dumber To,” considering that this is the third installment in this franchise, abet a 20 year lapse.

We find the main characters, “Lloyd Christmas” (Jim Carrey) and “Harry Dunne” (Jeff Daniels) emerging back into their world of shock comedy after Lloyd decides that he is finished bluffing Harry about his being in a vegetative state at a mental hospital for the last twenty years, upon hearing that Harry will need a kidney transplant.

In trying to locate Harry’s supposed long lost daughter, so as to harvest her kidney and save Harry’s life, the Farrelly brothers leave no stone unturned when it comes to exploiting human infirmities every step of the way. The movie progresses through it’s unfortunate journey of opportunity to “comedy-ize” some of the darker issues our society struggles with—bullying, crime, death of a loved one and sexual deviation, including bestiality—just to name a few.

It becomes more evident that the writers of the screenplay know full well that they have crossed the morality line with a feeble attempt to reel the audience back in (a type of reverse comic relief psychology, perhaps?) as seen in the so called negative reactions portrayed by Dr. Pinchelow (Steve Tom) and Mr. And Mrs. Stainer (Grant James and Taylor St. Clair). A couple of the “flashback” scenes (another Farrelly trademark) are quite disturbing, and this writer would caution all fathers with daughters beginning puberty from seeing it, and the other flashback involving Harry and his border collie brought Revelation 22:11 to mind.

The Farrelly trademark is in full swing with the use of clips of well known pop songs to lighten the mood—reminiscent of what you experience at a hockey game to “rev” the crowd up, especially when the home team is losing.

I managed to brave out the entire movie, despite my husband’s frequent requests to leave, and we left feeling “Sad and Sadder.”

Peter Farrelly has been quoted as saying, “We’re the anti-Coens. Nobody analyzes our filmmaking, and we don’t want them to.” [source: IMDb]

I beg to differ, Mr. Farrelly.

Comments below:
Negative
Negative—It’s a given that the makers of a sequel try to out-do the original film. This can go one of two ways with a comedy—the movie can excel, with more clever humor and a surprisingly innocent twist, or it can sink to a new low by dredging the bottom scum for laughable material. Unfortunately, this movie took the latter path, not surprisingly.

It’s not entertaining, in and of itself, but if you take your kids, be ready to explain what a meth lab is, what humor they are trying to extract from the multitude of sexual innuendos and comments, some extremely foul language, and what new four-letter words they’ll learn—because they’ll hear all of them.

It’s a disappointment and a waste of an attempt at comedy relief.
My Ratings: Moral rating: Extremely Offensive / Moviemaking quality: 3

DH, age 47 (USA)
Comments from young people
Negative—I really wanted to like this movie, because I really like Jim Carey. But this was a disappointing film. Also, it was a lot more sexual than I was expecting. Just watch “The Mask.”
My Ratings: Moral rating: Very Offensive / Moviemaking quality: 3

Ty, age 15 (USA)
Movie Critics
…junky production values… less jokes, less heart and less of the quirky weirdness that is Carrey’s home turf… It lets idiot movies down… “Dumb and Dumber To” falls on its face. …

Joe Neumaier, New York Daily News
…Returning to Lloyd and Harry was maybe not the smartest move for the Farrelly Brothers… ultimately, the shtick starts wearing a little thin… [2/4]

Chris Knight, National Post
…everything and everyone is as frantic and rabid as the protagonist dum-dums themselves. And those two have gone from being absurdly crude because they lack a good portion of gray matter to being mean and lewd from a lack of, well, basic human decency. …

Bob Hoose, Plugged In
…Hilarity is hard to come by… overall staleness… a mostly mirthless outing… Please, guys, don't do this to “There's Something About Mary”…

John DeFore, The Hollywood Reporter
…There are maybe six hearty laughs in the picture, which averages to about one per screenwriter (not a joke). …the material feels more desperate than funny… [C-]

Jason Clark, Entertainment Weekly
…the majority of the humor is either entirely irreverent or crass…

Ted Baehr, Movieguide
…continual below-the-belt jokes that wear thin fast. …the dumbest thing of all is how with 20 years to bring a sequel to the screen we were given such a flimsy story…

Christian Hamaker, Crosswalk
…crude idiocy…a bedraggled procession of potty and smutty humor, single entendres, gross sight gags, and mealy malaprops. …When all else fails (and it often does), the script resorts to mocking race or disabilities. … [1/4]

David Hiltbrand, The Philadelphia Inquirer
…There must be someone, somewhere, who finds jokes about catheters, flatulence, chipped teeth, castration and low-down sex with desperate old ladies absolutely hilarious. …

Stephen Whitty, The Star-Ledger (New Jersey)
Comments from non-viewers
Negative—This movie is not for Christians. Warning to all viewers: I just want to say that I saw a clip of this on Jimmy Fallon that was so offensive, involving Jim Carrey’s character SEXUALLY MOLESTING a female senior citizen in a nursing home, it made me want to throw up. I couldn’t believe they allowed this clip on TV, let alone in a movie THAT IS TO ATTRACT YOUNG PEOPLE. YIKES!

I couldn’t even watch any previews running on regular TV, because it affected me so much. This movie has got to be one of the most disgusting attempts at humor! Shame on Jim Carey and Jeff Daniels for trying to just make money instead of good film they certainly personify the title! They must be two desperate actors!
My Ratings: Moral rating: Extremely Offensive / Moviemaking quality: ½