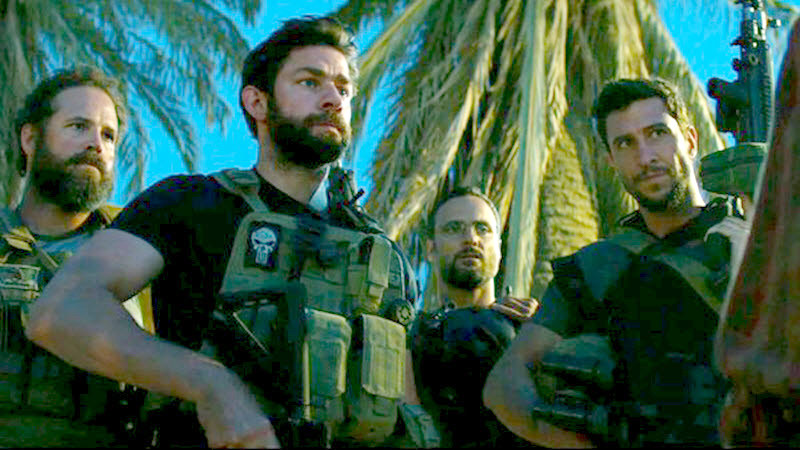 13 Hours: The Secret Soldiers of Benghazi

for strong combat violence throughout, bloody images, and language. 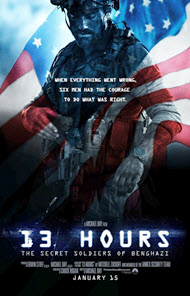 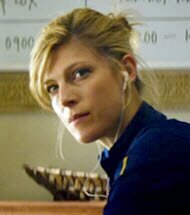 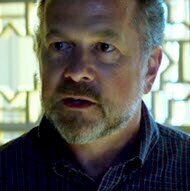 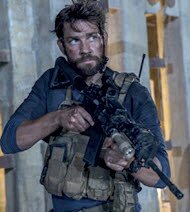 This film is based on Mitchell Zuckoff’s nonfiction book 13 Hours: The Inside Account of What Really Happened in Benghazi.

American fatalities and injuries of the 2012 Benghazi attack

having the courage to do what is right

“When everything went, wrong six men had the courage to do what was right.”

Good and evil exist in the world. Good tends to be self-evident. Evil’s talent is its ability to confuse.

The heroes of Michael Bay’s “13 Hours: The Secret Soldiers of Benghazi” are up against a lot of confusion. In the fog of war, even modern day war with cell phones, night vision goggles and infrared lasers, things are not always clear. The fuzzier realms can be knowing who your friends are, and understanding what is the ultimate goal of your mission.

The film comes out at a time when its content is the subject of political controversy and a Presidential Campaign. Whether or not the film will influence public opinion regarding the events that occurred in Benghazi on September 11, 2012 is uncertain, but “13 Hours” is bound to have an impact on the way we think about the armed services who fight the battles, and the political and civilian leaders who make the decisions about those battles.

Bay’s screen version of Mitchell Zuckoff’s bestselling book (Chuck Hogan wrote the screenplay) is full of the director’s trademark elements: symphonic explosions, car chases that turn into fireball races, a soundtrack that alternates between a vibrating drumbeat and a chorus of machine gun fire, and even the same bomb (this time a mortar projectile) that we saw fly, fall and detonate in Bay’s earlier “Pearl Harbor.” The scene may be a retread, but it still packs a punch.

The pace is relentless, but as fast as the action moves, time often stands still, as if the soldiers are trapped in a battle that will never end. You feel the heat, the sweat, the gunpowder grime, the weight of the packs and the rifles, the buzz of the passing bullets, as well as the zing when they hit their targets, and the visceral fear that an approaching passenger car can elicit. Is the figure behind the wheel a “friendly” or a human bomb?

The incisive cinematography by Dion Beebe and the rapid fire editing keep the adrenaline rising and the gut twisting. The rat-tat-tat of the AK-47s rarely ceases. The invading jihadis, part of a terrorist group called Ansar al-Sharia, constantly reinforce themselves and repeatedly attack. The events that unfold on screen make a clear statement about the nature of the Benghazi assault. This is no spontaneous demonstration sparked by some video. This is a planned attack.

The film opens with a title strip that states: “This is a true story.” Bay is emphatically standing behind his work; he does not settle for the “based on fact” line. We hear the voice of the U.S. President stating that Libya is now a new and democratic state, free of the oppressive dictatorship of Muammar Gaddafi. The president anticipates a bright future for the country. U.S. Ambassador Christopher Stevens (Matt Letscher) arrives at the Consulate in Benghazi and gives a speech full of praise and hope for Lybia. It is a confident speech, but also a naïve one. Crowds surround him as he speaks and as he enters the Consular compound in the company of a small protective detail that includes Glen Doherty (Toby Stephens) and Sean Smith (Christopher Dingli). Stevens’ handlers are aware of the risk they face, even if the Ambassador is not. They nervously scan the scrambling crowds, keeping an eye out for a “vest that may blow” at any moment. They realize that if trouble ensues, their detail is not sufficiently equipped or staffed to mount an effective resistance.

Nearby, at a supposedly secret annex (its location and function are no secret to the locals, and especially not to the terrorists), CIA operatives are being protected by a security detail made up of former Iraq veterans, Navy Seals and Army Rangers. They are Tyrone ‘Rone’ Woods (James Badge Dale), Jack Silva (John Krasinski), Kris ‘Tanto’ Paronto (Pabllo Schreiber), Dave ‘Boon’ Benton (David Denman), John ‘Tig’ Tiegen (Dominic Fumusa), and Mark ‘Oz’ Geist (Max Martini). The experienced and battle-weary Woods is explaining to newcomer Silva how security at the compound works—usually not so well—when a call comes from Ambassador Stevens’ team at the Consulate informing them that the compound is under attack and that they need immediate assistance.

Bay reveals the terrorist takeover of the Consulate to be a remarkably easy one. Short of leaving the keys in the entrance gate, security precautions could not have been more lax. A Libyan mission, the February 17th Martyrs Brigade, is employed to protect the gates, but when the terrorists show up, the brigade runs away. The police and a British security company, The Blue Mountain Group, are not present. Nor are they reachable.

The Ambassador and his protectors quickly become sitting ducks.

When the special forces team at the Annex move to assist those trapped in the consulate, the CIA chief at the unit, a cowardly bureaucrat referred to only as “Bob” (David Constabile), tells them to “stand down.” There is some back and forth arguing that leads to a decisive delay in the rescue attempt, but the forces ultimately disregard Bob and make their way to the Consular compound. After an unsuccessful attempt to save the Consulate and the men inside, they return to the CIA Annex where they fight to protect the CIA officials now trapped inside. The forces fight a harrowing battle on the compound roof, as the officials inside duck for cover and make futile calls for assistance and transport.

“We called but no one got back to us.”

“We called for air support but it never came.”

The chains of communication amongst the CIA staffers and between the annex and its superiors prove to be as weak as the chains barring the doors to the Benghazi consulate.

The soldiers on the roof fight valiantly against great odds. They do not save everyone, even some of their own make the ultimate sacrifice, but they ensure that most of their charges leave Libya unharmed. Sadly, at the end of the film, another title flashes across the screen: “Libya is now a failed state.”

“13 Hours” tells the warriors” story in a way that honors their individual and group bravery. There are a few reflective moments, as the men talk about their lives back home, and why, despite their love for their families and their homeland, they constantly find themselves on the battlefield. More moments such as these—the kinds of tender and heartfelt scenes that so enriched war movies such as “American Sniper” and “The Hurt Locker”—would have been welcome, but “13 Hours” does what a modern-day war movie should do. It honors courage and truth—it even acknowledges in one battle scene that our fates ultimately lay in God’s hands—and it affirms that, while evil is something that does not readily reveal itself, when it does confront us, we need to resist it.

Where evil exists, confusion reigns. The real heroes are the ones who do not let the confusion get the better of them.

Positive
Positive—Very good movie that every American should see. Not political at all, but demonstrates the courage and bravery of American heroes. I typically do not like movies with war or combat scenes, but wanted to get an idea of what really happened as told by the ones who lived it. The movie was very well done, acting, dialogue, special effects, etc. Very realistic concerning the combat scenes, including language, yet combat scenes were not gory. You did see some graphic scenes at the end regarding some injuries, but were pertinent to the story. It is heart-breaking to see what those warriors had to go through, but I have a better appreciation and great respect for soldiers, whether currently serving or not.
My Ratings: Moral rating: Average / Moviemaking quality: 4½

Gloria, age 50 (USA)
Positive—Just got back from the movie. There wasn’t a dry eye in the theater, and you could have heard a pin drop as the credits were scrolling. If this doesn’t ignite something, I shudder to think what it might otherwise take to wake people up to what really happened that day, and who was responsible. The viewers are left to put 2 and 2 together for themselves, in that regard, but one doesn’t need to be much of a mathematician to figure that one out.

It should be required viewing for all Americans, but you had better take a towel with you, and a large soft drink. You won’t want to be going to the concession in the middle of this one. The only downside to this movie is the mayhem and the profanities, but, hey, they are soldiers, and d*mn good ones at that. Belief in God and Christian thinking is portrayed only briefly, but in a positive light. Viewers are left with the impression that God was certainly looking out for these survivors.
My Ratings: Moral rating: Better than Average / Moviemaking quality: 5

Walt, age 65 (USA)
Positive—This was a hard movie to watch, because these brave people were put in such a dire position. The language is rough, and violence is extreme, so the movie is definitely not for everyone. It is an important story, however, so everyone should at least be aware of what happened. I recommend this movie highly, but be aware of the language and violence.
My Ratings: Moral rating: Offensive / Moviemaking quality: 4½

Mike, age 30 (USA)
Positive—If foul language hurts your ears, just be warned there is some vulgarity. Overall, this movie was very good and should be viewed by teens and older. Very heart-wrenching, but also makes you proud that there are men that are willing to risk their lives for their brothers. Highly recommend.
My Ratings: Moral rating: Average / Moviemaking quality: 5

Cheryl, age 58 (USA)
Positive—Even though “13 Hours: The Secret Soldiers of Benghazi” is justly rated R for strong combat violence, bloody images and language, I gave it a moral rating of “Good” because I feel that the strong message of courage in the face of overwhelming odds outweighs the strong violence and profanity, as it does in “Schindler’s List.” Like that film, this motion picture is hard to watch, but essential viewing for Americans. Even though the historical accuracy has been disputed by the left wing political party, the men who lived through the hell of that evil day stand by what they said, and their word should be enough against the lies perpetuated by the current administration.

The acting, writing and directing are excellent. Be warned, though: there is plenty of graphic violence, bloody images and strong profanity, which are essential to the story, as these elements were also crucial in conveying the horrors of Nazi Germany in “Schindler’s List.” God Bless America.
My Ratings: Moral rating: Good / Moviemaking quality: 5