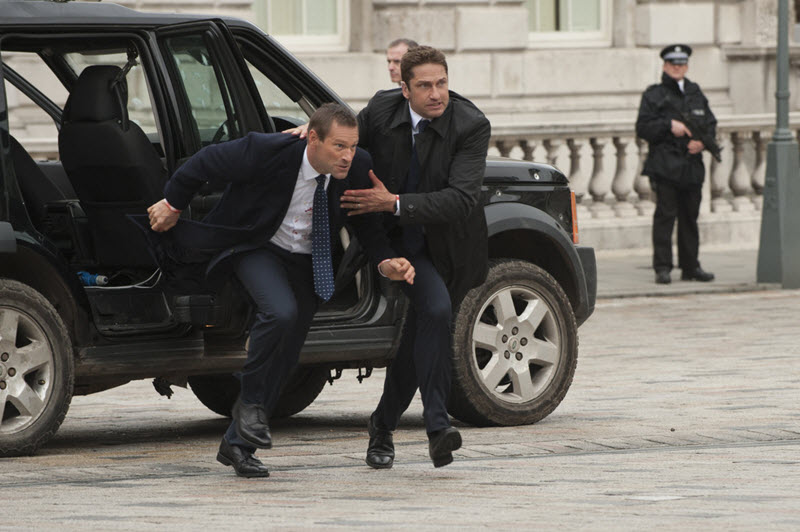 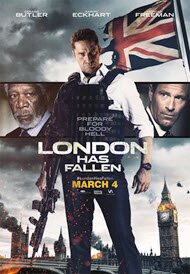 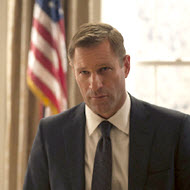 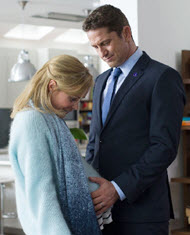 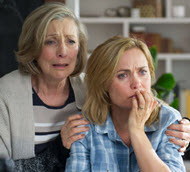 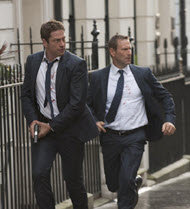 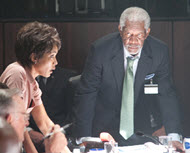 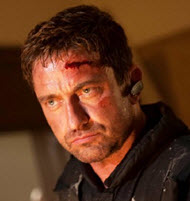 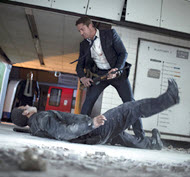 In preparation to review this film, I watched the prequel, “Olympus Has Fallen.” I was expecting a popcorn military flick with a few scenes of over-the-top violence. But I was shocked by the horrific deaths throughout. Instead of Michael Bay-style explosions, it mostly delivered Tarantino-level violence. So naturally, after seeing it, I was dreading the day when I would have to go to the theater to review the sequel. But I’m happy to say that this film is a huge, and I mean HUGE, improvement. I’ll compare the two films after I address all points of concern. It’s never been my style to put headings in my reviews, but this time I’m going to divide it up into three sections: positive elements, offensive elements, and cautions.

The characters in this film are some of the best role models I’ve ever seen in film. Their integrity is solid. They don’t let anyone convince them to give up on their country. Even when they are threatened with destruction, death, and torture, they always do what’s right. It reminds me of what Jesus did when under the punishment of the Romans, and also what we as Christians must do if we ever face such persecution in America. They all work together and are willing to sacrifice themselves to save others.

Also, it’s refreshing to see Hollywood’s willingness to be honest about terrorism. That’s rare to see, because it’s considered “politically incorrect.” But terrorism is a thing, it’s a wicked thing, and the people who do it are wicked people. This film is not ashamed to base its whole plot on that.

The language. There were fewer curses than I expected, but I still heard numerous f-words. There are some profanities and occasional scatological terms.

Obviously, the violence demands strong caution. There are bombings, shootings, and hand-to-hand fights throughout. That said, there are only a few scenes that involve blood. Most of the deaths are quick, and rarely are they close-up. Still, the sight of a whole city full of people going up in explosions is a tragic thing to watch. Sexual content is minor, only a husband and wife kissing a few times.

This film is less than half as violent as its predecessor. The predecessor had the same positive messages and patriotism, but that was overshadowed by the bloody, brutal, punishing violence. Honestly, I found “Olympus Has Fallen” to be a drag. It was as though all my interest was drowned in the blood, and I was eager for the movie to be over. But I actually enjoyed “London Has Fallen.” In only a few scenes is the violence gratuitous, and it was less disturbing. “London…” has just as much city destruction as “Olympus…” but MUCH less blood.

I feel about this film pretty much the same way I felt about “The Dark Knight Rises”—my thoughts are mostly positive, but I did feel that a few scenes are more disturbing than necessary. In fact, aside from the language, the producers would only have to cut two or three bloody camera shots from this film to get a PG-13 rating.

Giving moral ratings to films like this is always difficult. Terrorism is portrayed as evil, and the protagonists use violence only in self-defense. So technically, the violence is not unbiblical. But I still think it earns a rating of at least “Offensive” because, like I said, there are a few shots that showed too much, and I believe viewers have a right to be offended by having to see that.

Neither of the films in this franchise are that great, and I wouldn’t go around recommending them, because there are many more worthwhile action flicks. But if this type of action thriller interests you, and you are willing to handle the strong language and a few scenes of bloody violence, my advice would be not to wait for the DVD release, and give it try.

Positive
Positive—“London Has Fallen” maintains the time honored stance that the United States of America does NOT negotiate with terrorists, and like “Air Force One,” this point is hammered on just enough so that the audience gets the point. If you liked “Olympus Has Fallen,” you will thoroughly enjoy the sequel. The writers from the first film are back, along with Gerard Butler, Aaron Eckhart, Academy Award winner Morgan Freeman and Angela Bassett. The acting, writing and directing are sharp and the action scenes are very well done.

Both films earned their R rating for strong violence and language throughout. There are at least two audible misuses of God’s Name, and that is all the swearing in the film. The remainder is cursing, and there is a lot of it. But if you like action films and aren’t bothered by the f-words, the cursing shouldn’t be an issue for you. The violence is intense throughout, and there are many graphic scenes of people being shot at close range, impaled, and stabbed.

In a time where America is bowing down to the terrorists, this is a film well worth viewing for a stark reminder of what this great nation once stood for and should always stand for. God bless the United States of America.
My Ratings: Moral rating: Better than Average / Moviemaking quality: 5

D, age 30 (USA)
Positive—This movie was good. However, it did have a lot of f-words. Too bad, that was a bummer. You can read the other reviewers; they did a good job with the overall movie write-up, so I only have one thing to add. The roles of men and women were correct. Only men were involved in violence, only men were the good guys fighting. I like that there were no silly women cops beating up on men. It was man on man.
My Ratings: Moral rating: Offensive / Moviemaking quality: 4½

Robert Garcia, age 69 (USA)
Neutral
Neutral—This was the movie that you would expect. If you saw the previous movie “Olympus Has Fallen” you will not be surprised by this film. But, assuming the reader has not seen the previous movie: There was a significant amount of profanity used (I didn’t count, but there was plenty). I think the story was pretty easy to follow—Gerard Butler’s Secret Service Agent character seeks to protect the US president while London is under terrorist attack. There is lots of action / violence (some of it is a little gratuitous) as you would expect.

It is an exciting movie, and you won’t be bored. For those who like the action genre, and movies like “Air Force One” you will like this one, too. I also thought there was a good cast for this movie. The question is whether you feel it is worth the sometimes gratuitous / graphic violence, and pretty constant profanity (though certainly I have seen movies that were worse in terms of profanity). The decision is up to the viewer. But I hope this review helps you to make an informed decision.
My Ratings: Moral rating: Offensive / Moviemaking quality: 4

John, age 42 (USA)
Movie Critics
…it succeeds in laying claim to an audience’s attention for the entirety of its swift running time… this budget-conscious high-octane action piece verily zips along at such a fierce clip that it’s over practically before you know it. …

Todd McCarthy, The Hollywood Reporter
…The film is a popcorn-crowd pleaser, but a “yippee ki-yay” or two away from something more memorable. [2½/4]

Brad Wheeler, The Globe and Mail
…Butler proves his mettle as an action star… most of the film is just an excuse for nonstop action of the most ridiculous kind. …

Chris Knight, National Post
“London Has Fallen” is for angry conspiracy theorists, not so much for others…

Robert Abele, Los Angeles Times
Brutal, inane “London Has Fallen” is even worse than the original…

Stephanie Merry The Washington Post
…“London Has Fallen” is the Fuller House of red-meat action movies. In the sense that what initially looks like a mostly harmless hit of nostalgia for Reagan-era junk food turns out to be a slow-release capsule of apocalyptic dread. …the escapism it purports to offer feels a lot more like confinement.

Lindsey Bahr, Associated Press
…This saps the film of suspense at a stroke, because almost everyone that appears on screen turns out to be part of a sleeper cell. … this action sequel should have been a video game instead…