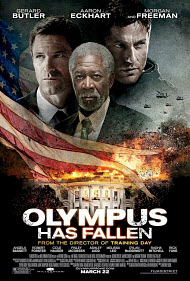 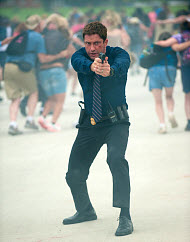 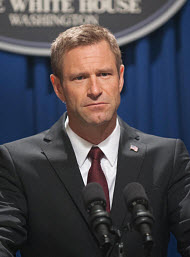 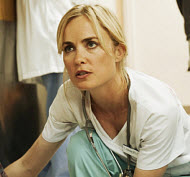 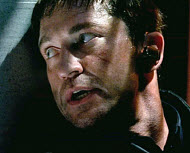 Mike Banning (Gerard Butler) was a head of President Benjamin Asher’s (Aaron Eckhart) secret service security team. He had friendship with the leader of the country and his wife and son. Until one snowy night on their way to a routine fundraiser banquet, tragedy struck. A car accident claimed the life of the First Lady (Ashley Judd). Mike Banning was unable to save her, and that caused him to be reassigned from the President’s detail, to his lasting regret. After 18 months of working for the treasury, on a typical day, the White House is taken over by Korean terrorists; Banning is the only one left who can save the President.

As a fan of Gerard Butler and Angela Bassett, I really wanted to see this film. I wasn’t disappointed, overall, the film is well done. The acting is quite satisfactory, and Butler and Eckhart’s performance is great and very compelling. A recently widowed President, an ex-security personnel looking for redemption, their roles are well conveyed and received by the viewing audience. Bassett and Morgan Freeman did adequate jobs, as well. The plot is straight and to the point, easy to understand and follow.

Now to the objectionable content, sadly there is plenty. The most offensive is the violence; people are shown being graphically shot, stabbed and beat up. It was almost too much for my sensibilities. In addition is the profane and vulgar language; sadly, this has become a trademark of most secular films, regardless of content—the gratuitous blasphemy of the Lord’s name. The film is exciting, but it would have been far better without the vulgarity and profanity.

The film deals with timely themes (terrorists, war, civil unrest), all which can fill us with fear, doubt, and unsettling longing for hope in the midst of it all. As Christians, we have nothing to truly fear.

The film also deals with redemption. This is connected with fear, because of our redemption through the blood of Christ Jesus, that cast out fear and gives us everlasting hope.

As for a recommendation, I like the film, but the violence is on the extreme side, and the repeated blasphemy brings the film down, and made it difficult to truly enjoy, for me.

Positive
Positive—Overall, I really appreciated this film. I have always been an action fan, and the cast is excellent. That being said, there is a lot of foul language (which I am willing to forgive because of the stress all of the characters are constantly under), but the violence is almost too much. Not to say I didn’t expect violence, but I didn’t expect the sometimes sadistic nature. Both the good and the bad guys employ torture (including the merciless beating of a 50 something year old woman), and that, to me, is unacceptable. Having said that, those scenes only comprise about 6 minutes of the total runtime, and I found the rest of the film to be very entertaining. It’s wonderfully done, but you need to know what you are in for.
My Ratings: Moral rating: Extremely Offensive / Moviemaking quality: 4

Colin, age 26 (USA)
Neutral
Neutral—Gerard Butler was on his game. Excellent CGI and acting. Be ready for an above average amount of objectionable language, but it fits for the situations that the characters were in and is not gratuitousness. If you are military or secret service, you will find many flaws in military, secret service and special operations protocol, as well as missing security from around The White House, but this all makes the movie more adventurous. There also is an enormous amount of gore, including brains blown out of heads, stabbings and beatings. This could be the best action movie so far this year.
My Ratings: Moral rating: Better than Average / Moviemaking quality: 4

Mark, age 45 (USA)
Neutral—I had actually been interested in seeing this movie since it came out. Considering that I’m a fan of action movies, and I love Gerard Butler and Morgan Freeman, I was surprised at my mixed reaction to it. On one hand, it’s a slam-bang action movie, that kept me on the edge of my seat for the whole 1 hour and 59 minute running time.

On the other hand, it had some content that could have easily been left out, and this would have still been a superb action flick. This includes violence in nearly every scene in the movie, sometimes accompanied by blood, and language… I counted 15 F-words, and an assortment of other profanities. Thankfully, there was no nudity or sexual content to speak of. See all »
Now, on to the cast, which is, in my opinion, one of the greatest movie casts ever assembled. Led by such great actors as Gerard Butler, Aaron Eckhart, and the amazing Morgan Freeman, as well as a wonderful supporting cast, they really make the audience feel the tension of a hostage situation at The White House. And, it’s always nice to see Gerard Butler kicking some major rear end.

Bottom line, if you choose to see it, get ready for a wild action ride that starts out fast and doesn’t let up. But, also, be warned… if violence and language offend you, it’s best to stay away from it. Also, at all costs, keep children under 16 or 17 away. This is NOT a movie for them. But, I liked it overall.
My Ratings: Moral rating: Very Offensive / Moviemaking quality: 3

Jared Barton, age 33 (USA)
Negative
Negative—Expected the bullets, blood, action… found it hard to take that about every 15 words was the “F” word. Don’t people know any other adjectives??? The good guys win in the end… but does the world really talk like that? Felt like I needed to take a shower after all the vulgarity. Without the language, the plot was good. Agree with the reviewer’s comments.
My Ratings: Moral rating: Extremely Offensive / Moviemaking quality: 3½

Brenda, age 72 (USA)
Negative—There were about 15 F-words, not 36. And it wasn’t until about an hour into the movie when things got really crazy. Certainly not needed, but it was the outright blood and violence that was even more intense. As the end times approach, these kinds of things are more likely to happen, so it was interesting to see the movie. There is just a lot of violence, murder, blood and massive shootings of 20 people at a time.

Is my life better for seeing it? Certainly not, although, for the movie, it was a well made movie. Not anything Christians need to fill their head with, that is for sure. And I do like the movies like the Bourne series, so it’s not that I can’t handle some violence in movie, this was very extreme, the most I have seen in a very long time.
My Ratings: Moral rating: Very Offensive / Moviemaking quality: 5

Samantha, age 38 (USA)
Comments from non-viewers
Negative—I’ve REALLY wanted to see this movie from the first time I saw the preview—I find the premise of it pretty compelling. When I saw it was rated “R” though, I decided to wait until I could read a review from a Christian perspective, and I’m glad I did. Thirty-six F-words? Are they serious? On average that’s more than one every 3 minutes—I don’t think there’s any excuse for that. While I do have friends that curse that much, I think it’s one thing to endure it for the sake of maintaining a relationship with someone, and another thing entirely to subject myself to it for the sake of entertainment.

I think it’s important to realize that the only thing that will work when it comes to over the top Hollywood movie content is voting with our wallets. This is something that we can change—Christians make up a significant percentage of the movie going public. If we were to refuse to spend money on seeing films with over the top content things would change, because at the end of the day those working in Hollywood care about making money.

Every time we just shrug our shoulders and go to the cinema anyway it tells the Hollywood directors and producers that it doesn’t matter what they put into a movie because millions will go and pay money to see it no matter what. So, while I really was looking forward to seeing this film, I think I’ll have to wait quite a bit longer until the edited version makes it to TV.