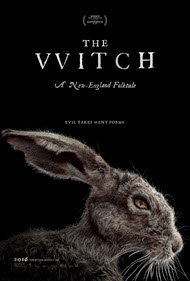 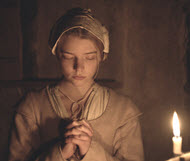 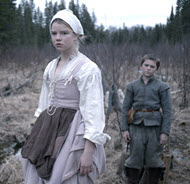 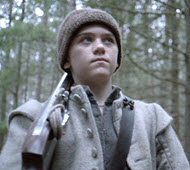 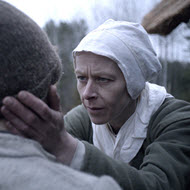 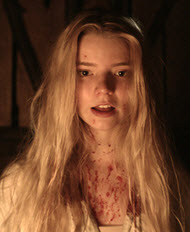 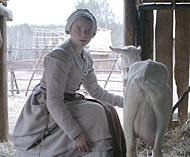 What are holiness, righteousness, and goodness?

What is sin and evil?

learn about the fall of man

Here’s what the distributor says about their film: “Set in New England circa 1630, ‘The Witch’ follows a farmer who get cast out of his colonial plantation and is forced to move his family to a remote plot of land on the edge of an ominous forest rumored to be controlled by witches. Almost immediately, strange and unsettling things begin to happen-the animals turn violent, the crops fail, and one of the children disappears, only to return seemingly possessed by an evil spirit. As suspicion and paranoia mount, everyone begins to point the finger at teenage daughter Thomasin. They accuse her of witchcraft, which she adamantly denies… but as circumstances become more and more treacherous, each family member’s faith, loyalty, and love will be tested in shocking and unforgettable ways.”

Does this film misrepresent the Puritans? What were American “Puritan” families really like? See: • “The Puritans Behind The Myths” (Christian History Institute—off-site) • “Those Admirable English Puritans” (Probe Ministries—off-site) / Books: • A Quest for Godliness: The Puritan Vision of the Christian Life by J.I. Packer • Worldly Saints: The Puritans as They Really Were by Leland Ryken • Who are the Puritans? …and What Do They Teach? by Erroll Hulse

Comments below:
Positive
Positive—Robert Eggers’ “The Witch” is the type of horror film that I have been anxiously awaiting for quite some time. It is, simply put, one of the best films of the year—maybe even the decade. Perhaps the century. That is not hyperbole, it is merely the truth.

The film opens in the 1600s, some time before the Salem Witch Trials, as parents William and Katherine, and their four children, Thomasin, Caleb, and two twins named Jonas and Mercy, and a baby named Samuel are banished from their Puritan village after William’s religious piousness is seen as too extreme. With all of their belongings in tow, they ride a covered wagon into the wilderness where they plan to start anew.

But something evil lingers in the woods, and has already set its sights on them. Not too long after the family arrives, Thomasin begins an innocent game of peek-a-boo with her baby brother that ends in tragedy. The infant vanishes inexplicably, leaving Katherine grief-ridden and unable to come out of bed. Soon after that, the crops begin to fail, and the twins start conversing and chanting with the family’s creepy black ram, named Black Phillip. Apparently, not only do the twins talk to the sinister he-goat, they also claim that he talks back to them, as well, whispering ever so tenderly that their older sister may be a witch.

Added to that, young Caleb is on the verge of puberty, and can’t stop ogling his sister’s cleavage. See all »

From the get go, an evil presence is set loose on this family, and for the duration of this film, we will see that evil have its way with them. Their faith will be tested, by way of deception, seduction, demonic possession, and violence. There really is a witch in the wood. This isn’t just some surface level exploration of paranoia and religious fanaticism in simpler times. It’s a serious meditation on true wickedness.

Eggers gets everything right in his feature debut. Four years of research went into this film, and it shows. Every detail is perfect. We haven’t seen a more honest and true portrayal of witchcraft since Benjamin Christensen’s 1929 silent film, “Häxan”—a film that I would recommend you watch in preparation for this one. As many other reviewers have said, the film is similar in tone to Kubrick’s “The Shining.”

I’d even compare it to the work of Ingmar Bergman and Roman Polanksi. This is a deliberately paced experience—something that many mainstream audiences have already taken issue with—but this reviewer wouldn’t have it any other way. You can find cheap thrills in the theatre on a weekly basis, and if that’s what you are looking for, skip “The Witch” altogether. This is a different animal, one that burrows its way under the skin.

Also, worthy of mention is the films score by composer, Mark Korven. The music is a masterpiece in its own right, sharing similarities to Penderecki’s post-modern religious works, “Utrenja” and “Magnificat.” The choir screams, hisses, and chants against a horrific backdrop of shrieking string instruments. The music is as much a character in the film as the family at the center of the action.

With his first feature, Eggers has thankfully given us a purely cinematic, uncompromising work that you won’t soon forget. The entire cast of unknowns does fantastic work here, reading from a script that is entirely made up of Old English dialogue. Anya Taylor Joy, Ralph Ineson, Kate Dickie, and Harvey Scrimshaw all stand out in superb performances, and should all be praised. Eggers is one to watch. Do yourself a favor—don’t miss “The Witch.”
My Ratings: Moral rating: Offensive / Moviemaking quality: 5

Steven Adam Renkovish, age 33 (USA)
Positive—There is no “agenda” here. Contrary to what people may think, this film takes place many decades before the notorious “Salem Witch trials” and does not make Christians look bad. Christians are in fact the victims. Just don’t go in looking for a happy ending.
My Ratings: Moral rating: Average / Moviemaking quality: 5

Victor, age 42 (USA)
Positive—I think many viewers are totally missing the small hints and think that this movie is 100% about spiritual battles… you may be surprised… it isn’t… let me explain. While there are dozens of different age, sexuality, and family troubles that take part throughout the cause and effect connection to result in the family’s demise, I could count at least two huge factors that are brought up, but never blamed to be the natural cause of chaos: starvation/dehydration and sicknesses. Which were rarely looked at to be the cause of serious delusions, anger and other health problems that the puritans may have ignored because of the lack of medical knowledge. See all »

I don’t believe the movie ever portrays faith to be the problem for the family, but the paranoia of ultimate damnation, especially for the children, from the stories about the devil and witches being anywhere, without them knowing it creates a dark rift between them. I can’t explain each scenario (there are just too many to explain here), but try watching this movie while keeping in mind that these are very hungry, very scared and possibly suffering from sickness, probably food poisoning, and see their own nightmares as God sent punishment.

And to those who complain that this doesn’t have a happy ending, why should it? This isn’t for good feels. It’s a story of a man whose plan and hopes of a better life just didn’t work from lack of knowledge of how to raise a big family outside civilization and in unknown territory. Which is totally a warning tale of the ages. Remember the Donner Party? Things unfortunate as this DO happen in desperate situations, even when the persons have absolute faith in God.
My Ratings: Moral rating: Good / Moviemaking quality: 5

Kassie Macmillan (non-Christian), age 28 (USA)
Neutral
Neutral—My reaction to this movie? I think it perfectly captured the depth of depravity of Satanism—a practise that flourished in secret during the ages past, but in today’s society is all prevalent. The world has turned its back on Almighty God and embraced the yawning darkness. If the story had been true and portrayed exactly the way it happened, then it would have shown how protected God’s children are from such immense forces of pure evil.

Sadly, it made God look like the imaginary friend that non-believers think we have, weak and unable or not caring enough to save and protect His followers. It was very dark, very sobering, and the only frightening thing about it was how many people will believe that calling upon God in times of need would be an utter waste of time. How sad and untrue that belief is!

The period was beautifully captured in all it’s ruggedness and simplicity. Life was so harsh back then, we take a lot for granted in today’s world. The characters were believable, the acting was excellent as were the sets and costumes. If you’re looking for a feel good movie or a happy ending, you won’t find it here.
My Ratings: Moral rating: Extremely Offensive / Moviemaking quality: 5

Michelle, age 51 (Australia)
Comments from non-viewers
Neutral—Any thinking person will not waste their time or money on this agenda based Hollywood propaganda. As for those inclined to watch such pathetic dribble—sorry, you can’t be helped. If the same progressive rehashing of false history has not become an insult to your intelligence yet, it’s a lost cause! Enough said…

Harry, age 44 (USA)
Movie Critics
…The devil truly is in the details in this dreary, demented rumination on wickedness … that has no godly counter and certainly no happy ending. [1/5]

Adam R. Holz, Plugged In
…THE WITCH has a strong occult worldview with incredibly strong anti-Christian elements and extreme pagan undertones. …all moviegoers are advised not to allow THE WITCH to pollute their minds either. THE WITCH is a strong candidate for the most offensive movie of 2016. …

Ted Baehr, Movieguide
…This superbly creepy feature couldn’t get any scarier, more satisfying or chilling… perfect pacing to craft a palpable sense of dread. You may not believe in witches today, but you may well leave the film certain they roamed the Earth 400 years ago. …

Chris Knight, National Post
…Judiciously gory but never bloodthirsty… a horror film that unnerves frame by frightening frame… a grim wade into the disintegration of a besieged God-fearing New England family in the early 17th century. …

Robert Abele, Los Angeles Times
A seriously scary debut… a father’s obsession with holiness brings a darkness into the household…

Joe Morgenstern, The Wall Street Journal
…2016’s first great horror movie… I’ve just run across the first genuinely Satanic movie of my life. Lots of horror flicks traffic in mere demonic trappings and symbols and Latin phrases. “The Witch,” however, truly feels like it was touched by a diabolical hand. To which I say, “Why not?” Christians have so many movies to call their own, it’s only fair that the Devil worshippers get one, especially if it’s as authentically scary as this. …

Kristian Lin, Fort Worth Weekly
…Although [Director] Eggers is extremely discreet—the things you don’t see are more horrifying than those you do—the picture’s relentlessness sometimes feels like torment, a quasi-Biblical punishment with an unpleasant sheen. But if you can survive it, “The Witch” is a triumph of tone. …

Stephanie Zacharek, Time
…gripping… an exquisite sense of historical detail… a strikingly achieved tale of a mid-17th-century New England family’s steady descent into religious hysteria and madness. …leaves no doubt about the dangerously oppressive hold that Christianity exerted on some dark corners of the Puritan psyche. …

Peter Howell, Toronto Star Newspapers
…Which is more nightmarish: the spectre of a child-stealing crone who lives in the woods, or everyday life as a Puritan?… It’s a creepy little gem, and its imagery will stay with you long after you’ve left the theater. … [4/4]

Sara Stewart, New York Post
…Unsettling yet mesmerizing, “The Witch” is more of an art film than a horror flick. Writer-director Robert Eggers does nothing to contradict the notion that the Puritans were severely repressed and dangerously susceptible to superstition. …