for some language and a scene of sexuality. 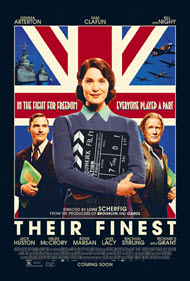 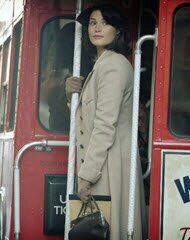 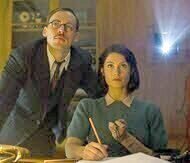 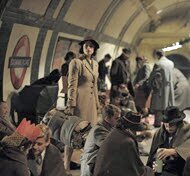 fear of the Lord 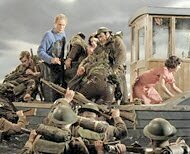 issue of filmmakers ignoring the truth 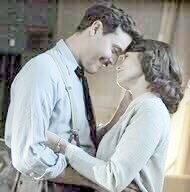 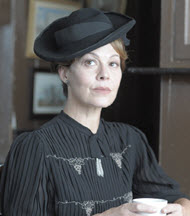 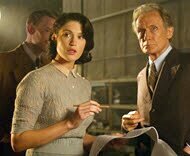 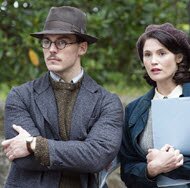 The British film, “Their Finest” is based on a comic novel by Lisa Evans called Their Finest Hour and a Half. The book, in turn, takes its title from the words of one of Winston Churchill’s inspirational World War II speeches:

“…if the British empire and its commonwealth last for a thousand years, men will say that THIS was their finest hour.”

Danish director, Lone Sherling, who made two of the last decade’s best films (“Italian for Beginners” and “An Education”), directs a solid screenplay by Gabbie Chiappe that cogently blends the routine with the surprising, the funny with the heartrending, and the real with the made-up. They have crafted a great comic movie, one that reveals how humor is man’s response to an unbalanced world and how laughter, joy and salvation come with a price.

Ms. Shefling and Ms. Chiappe tell the behind-the-scenes story of a movie studio’s efforts, under the direction of the British War Department, to make a film that will entertain an audience and will also galvanize the British public during the Blitz of 1940, when the outlook for freedom, and even survival, was grim.

Catrin Cole (a captivating Gemma Arterton) thinks she is taking a job as a secretary at the movie studio, but quickly finds herself co-writing scripts with the studio’s head writer Tom Buckley (Sam Chaplin, who more than redeems himself after his pallid turn in the dreadful “Me Before You”). Buckley recognizes Cole’s talent early on and assigns her to write “the slops,” the trade name for “women’s dialogue.” Her natural proficiency, her hard work and her grit (she casually brushes the bomb dust off her desk as she is typing a script revision)—qualities that personified the heroism of the common Londoner who faced uncommon odds during World War II—ensure her swift rise from sketcher of “slops” to major screenwriter.

The Punch and Judy nature of Mr. Buckley and Mrs. Cole’s working relationship ignites a romance, an ire-filled one that sprouts more thorns than buds (I hope it is not a spoiler to reveal that, although she calls herself Mrs. Cole, Catrin is not legally married). Their advers meetings frustrate each other, but their friction allows them to flower in a way that neither can do alone. Mrs. Cole is certainly the better writer, but Buckley keeps her grounded, and despite her abilities, she needs that grounding. Buckley is constantly editing her lines, throwing pages back at her as if they were yesterday’s newspapers:

Mrs. Cole’s copy is not the only thing Buckley tries to pare down. He resents the Bohemian melodrama that she has created for herself, one in which she pretends to be the wife of a struggling artist (played well by Jack Huston, who also redeems himself after last year’s “Ben-Hur” embarrassment) who stays home and paints bleak scenes of the London blitz while his wife goes off to work. Mrs. Cole discovers that her artist’s afternoons at home without her are anything but bleak. That truth may set her free, but she resents it’s going off script. Buckley’s persistent haranguing brings Catrin off that cloud. He pulls her down to earth, and she, in turn, tames his reflexive misanthropy and his bottomless pessimism (he calls a full moon on a heavenly night a “bomber’s moon”).

The entire supporting cast of “Their Finest” is splendid. Even a bull terrier gives a performance that evokes admiration, and tears. Bill Nighy stands out, and often steals the show, as Ambrose Hilliard, an aging film actor who is given a small but pivotal part in the planned film. Hilliard’s days as a star may be long past, but he does not let that sap his vast reserves of ego and self-regard. Hilliard is vain and selfish, but Nighy imbues those traits with more comedy than venom. The old ham may be self-centered and selfish, but like a real gentleman, and a real Englishman, he gamely steps forward whenever he is asked to do something truly selfless.

Films about films (Vincent Minnelli’s “The Bad and the Beautiful,” Fellini’s “8½,” Woody Allen’s “The Purple Rose of Cairo”) can be captivating in their depiction of how the sausage gets made, but unlike many of them, “Their Finest” keeps the contempt and self-loathing at bay, and lets the creative process take pride in its own hard work and dignity. Set in any other time or place, such a tale of daring-do might seem sentimental or hokey, but when one’s street, pub, and home become unremitting German targets, a story about ordinary people doing extraordinary things is anything but shallow. 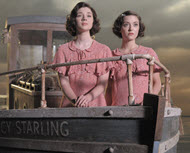 Buckley and Cole tell a parallel story in their screenplay: twin sisters who live on a country farm borrow their father’s boat, and with the help of their kind-hearted but boozy uncle, they steer the small craft toward Dunkirk in order to set free a group of stranded soldiers. Due to the demands of the film’s producers, and the war department’s representatives, the girls’ real-life adventure gets reworked to the point that it becomes a story not so much based on fact as one that rolls on in spite of the fact.

Even more script revisions are made during production as German bombs constantly wreak havoc on the writers, the actors and the movie itself. Despite the difficulties, Cole and Buckley’s efforts eventually pay off. It’s a joy to watch their film come together, and especially to see the effect it has on a real movie audience.

On the page and on the screen, Cole and Buckley get to create their own ending, one that they and their audience can both cheer. But unlike the movies, real life can be a cheat. What we hope for or count on is ultimately a toss-up. Sometimes there is darkness; other times there is light. Part of that light comes from a screen when the theater is dark and the faces in the crowd wait with anticipation and hope. The greater part comes from a faith in knowing that good does prevail, and that today’s suffering will some day bear fruit.

“Weeping may endure for a night but joy cometh in the morning” (Psalm 30).

Faith and studying God’s Word for understanding and guidance are important at all times, and perhaps especially during the tragedies and hardships of war. As with most secular worldview movies, this is ignored by “Their Finest.” The film also overlooks some of the apparently miraculous events of the Dunkirk evacuation that followed A National Day of Prayer. Code-named Operation Dynamo, the evacuation came to be known as the Miracle of Dunkirk.

The Nazis could have defeated their opposition and taken Britain. Instead, the results of that day of prayer and the continued faith of Christians ultimately brought Nazi defeat, rescuing the world from its terrible blood lust and tyranny which sought to exterminate God’s people.

Positive
Positive—Having over 300 books and DVDs on this period of history, I was irresistibly drawn to this movie; and I wasn’t disappointed. The script, acting, cinematography and historical accuracy were good, and the profanity and nudity, although grating, were brief. Although the lead character is in a common-law relationship, her mate’s infidelity is not dealt with lightly, but presented as a crushing blow.
My Ratings: Moral rating: Average / Moviemaking quality: 4

Brian Schacht, age 70 (Canada)
Negative
Negative—I watched this movie, as my boyhood years were during the years of WWII. It wasn’t one thing or the other, a drama or a comedy. During an air raid, Gemma goes into the street, you hear the distinct scream of a Stukka dive bomber followed by an explosion. During all my years living in London, I never heard or saw a single Stukka. They were slow aircraft easily shot down; I doubt any ever ventured as far as London.
My Ratings: Moral rating: Average / Moviemaking quality: 2½