for language and some sexuality 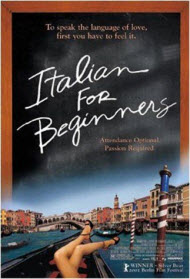 love in the Bible

Learn how to make your love the best it can be. Discover biblical answers to questions about sex, marriage, sexual addictions, and more.
Forgiveness

FORGIVEN?—How can I be and feel forgiven? Answer

hope in the Bible

“To speak the language of love, first you have to feel it.”

There is a cinematic movement in Denmark called “Dogma 95.” Sometimes I wonder if the English translation of that term is a bit off. That name has a rigid, conformist, almost totalitarian ring to it. “Dogma 95” encourages its filmmaker followers to adhere to standards of conservation and simplicity, and to shun technical bombast and expensive showmanship. It hardly seems like a revolutionary approach to movie making until I try to imagine what would have happened to recent products such as “A.I.,” “Moulin Rouge,” or “Brotherhood of the Wolf” if they were limited by such technical rules. I confess that I’ve read more about “Dogma 95” films than I’ve actually watched them (Danish films aren’t imported to the U.S. all that often), but this weekend I saw a recent Dogma movie called “Italian for Beginners”. The technique may have been minimal—there were no visual pyrotechnics, no wide screen panoramas, no camera swirls, and no rapid-fire cutting—but the content was anything but bare-bones or spartan. Despite its cold, Scandinavian winter setting, the film had the consoling and nourishing warmth of a wood fire and a mug of hot chocolate on a night filled with snow and sleet.

“Italian for Beginners” is the story of six Danes whose lives intersect when they meet once a week for Italian lessons. Andreas (Anders W. Berthlesen) is a visiting minister who has come to town to stand in for an ailing, somewhat mentally unbalanced pastor. Andreas has a comforting, laid back style that wins over the hearts of the congregation (his services, at first attended only by a few parish nuns, are soon being given to packed houses), and the heart of a waifish, accident prone bakery clerk named Olympia (Anette Stovelbaek). Andreas stays in a hotel managed by Jorgen Mortensen (Peter Gantzler), an insecure romantic who is secretly in love with the hotel restaurant’s Italian cook, Giulia (Sara Indrio). Giulia, in turn, secretly loves Jorgen Mortensen. She prays earnestly to God for help in opening Jorgen’s heart. The two would-be lovers have a mutual respect for each others’ cultures. He respects and adapts to her Mediterranean and Catholic background. Although her understanding of Danish is minimal, she seems to understand his middle age limitations, his shyness and his loneliness.

The head waiter in the restaurant is a handsome but unkempt, unruly and uncouth young man named Hal-Finn (Lars Kaalund) who insults his customers, and later when he takes over the teaching duties for the Italian class, mercilessly chides his adoring students. His rough edges soften a bit when he falls for Karen (Ann Eleanora Jorgensen), a hairdresser who we later discover is the long lost sister of one of the other characters. All six come together for the Italian class, a symbol of a new direction in life, a path that creates new hopes and new struggles. A stroke of fortune allows the members of the class, all of whom live modest lives, to travel to Venice to share time together, and to apply their new found language skills.

The plot may seem a bit contrived. It certainly did to me while I was writing that summary, but the movie itself doesn’t play that way. The writer / director, Lone Sherfig, breathes life into her characters and into their relationships, and she does it with a subtle touch. Reverend Andreas has no climactic confrontations with his scornful pastor. He respects the elder man’s position and tries to work with him and for him.

He guides his parishioners and friends in a gentle understated way allowing them to come to conclusions themselves, but without a new-age, self-discovery cymbal clash. Sherfig brings out the tenderness that underlies each relationship without downplaying the doubts, the fears and the unsteady ground that may lie beneath. She works wonders with the most troubling twosome of the bunch, the cantankerous Hal-Finn and the hardened Karen. Omen like circumstances often keep them apart, and when they do connect, their communication is sexual. Much too sexual. On top of a desk, or in a Venetian cul-de-sac, their unions are more Playboy fantasy than real life connection. The writing is on the wall for Hal-Finn’s and Karen’s relationship. Both are wounded souls who are misdirected in their search for redemption. It is their few tender moments when hope emerges from melancholy and anger that the goodness in both of them shines.

There may be too much formula in Sherfig’s screenplay, but that formula has enough twists and turns to keep things interesting and unpredictable. Most of the comic relief comes from the antics of the constantly befuddled and clumsy Olympia. Anette Stovelbaek, a modern version of Giulietta Messina in such Fellini films as “La Stada” and “Le Notte di Cabiria”, is able to make helplessness look independent and strong. Her Olympia constantly misspeaks her Italian (“My sister is in the refrigerator.”), and is unable to keep from dropping things. Her repetitive calamities after awhile may seem like gratuitous grabs for laughs until the underlying reason for her absentmindedness is revealed.

I expected the finale in Venice to have a fairytale feel, as do almost all movies whose characters turn up in Venice, or anywhere in Italy, but Sherfig doesn’t push the postcard charm. The class travels in the winter when Venice surely rivals Copenhagen in chilliness and dampness. The Venetian skies are gray and the canals are charcoal-colored. It’s almost bleak. And that has to be a first. It would be like traveling to Paris when the lights are turned off. Sherfig leaves it to her characters to create an ambiance of charm and romance. This is what I perceive “Dogma 95” to be about. The director doesn’t seem to be hindered by the limitations placed upon her. She flourishes inside those boundaries.

“Italian for Beginners” has two graphic sex scenes (the ones I mentioned earlier). There is no nudity. Clergy are presented in a kind, uncorrupt, un-Hollywood light, and church-going is viewed positively. Two of the characters show a particularly admirable trait in the way they honor their father and their mother, despite the difficulties in doing so. The issue of euthanasia is approached, but not directly addressed. I strongly oppose euthanasia and assisted suicide, and I don’t believe the situation in the film falls into either category even though it looks as though it might. I found the circumstances too implausible (is it really possible for a hospital visitor to turn up a patient’s morphine infusion with a simple push of a thumb?) to take the issue, as depicted here, seriously.

The film is in Danish and Italian with English subtitles. It is an entertaining adult film, with some good insights into human nature and a refreshing look (even if it’s just a peek) at the rewarding effects religion can have on people’s lives.