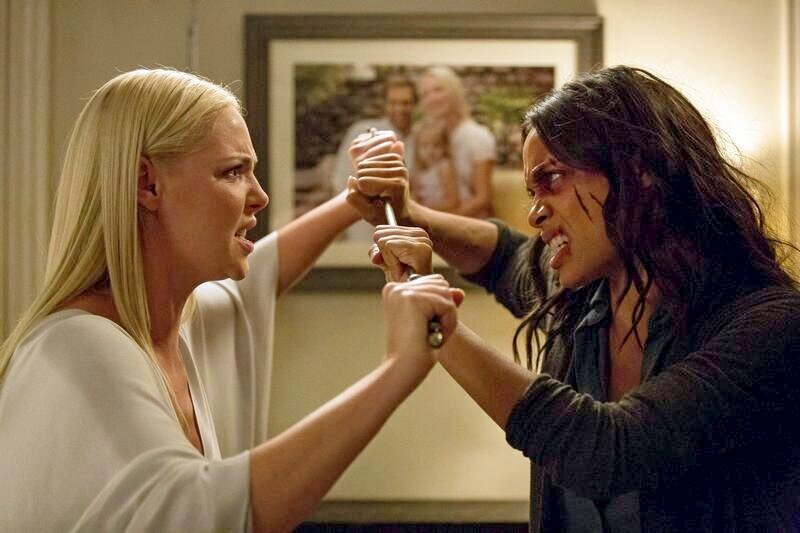 for sexual content, violence, some language, and brief partial nudity. 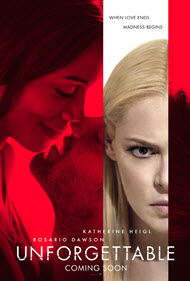 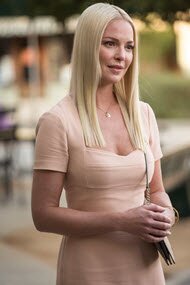 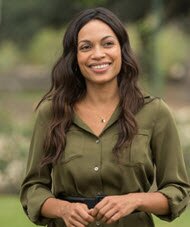 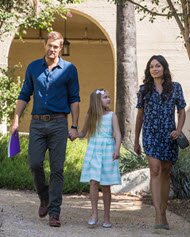 Why is the world the way it is? If God is all-knowing, all-powerful, and loving, would He really create a world like this? (filled with cruelty and suffering) ANSWER 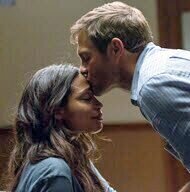 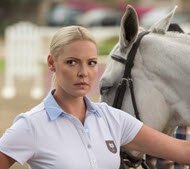 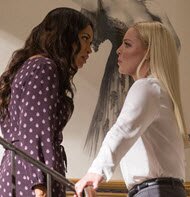 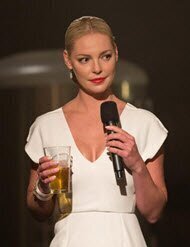 Meet Julia Banks (Rosario Dawson) and David Conover. Julia is an online Web site editor. David is a single father (currently divorced) pursuing his dreams of growing his brewery business and taking care of his girlfriend Julia and his daughter Lilly. On top of that, David and Julia are getting married. There’s just one little problem, though…. David’s ex-wife, Tessa.

You see Tessa’s not so thrilled with David’s new girlfriend, Julia. After all, as Tessa says, “This [her family] is my life!” Tessa feels, well, threatened by Julia’s presence. Julia starts to notice this and begins to believe Tessa is trying to break up Julia and David’s relationship and potential marriage. Julia tries to tell David, but David doesn’t quite believe the story.

Then things start to happen…. Julia’s phone goes missing, and her engagement ring. Someone, using Julia’s name, contacts her abusive ex-boyfriend through a fake Facebook account. Who does Julia suspect? Tessa, of course! Still, David doesn’t believe her.

I probably wasn’t the target audience for this film. Still, I couldn’t help but enjoy the film for what it is. “Unforgettable” is really well done and a tribute to the thriller/suspense genre. I don’t think there is a bad cinematic aspect in this film. The plot is well written. Even when I thought I had the ending figured out, there were a couple moments where I found myself second-guessing my original conclusion. The pacing of the film is also good, with perhaps a few moments that felt somewhat rushed.

However, what is most impressive with this film is the two female leads, Katherine Heigl and Rosario Dawson. I was surprised to learn that Kate Hudson and Kerry Washington had turned down the roles, due to conflicts with other films. In retrospect, I’m kind of glad. Heigl and Dawson’s performances are phenomenal. The two have perfect chemistry together on screen, feeding off each others lines and scenes perfectly. There are also some great supporting performances from Geoff Stults (who plays David) and Cheryl Ladd (as Tessa’s mother). Like I said, cinematically, this film is really well done.

While “Unforgettable” has a lot going for it, it also a lot NOT going for it, particularly in the objectionable material category.

Violence: There are a few scenes (two in the form of a flashback) where we witness a woman being abused by her boyfriend. During one of these scenes, she grabs a large butcher knife in defense and cuts him in the shoulder. We also see her resulting facial bruises. A character is hit hard in the back of the head, leaving the character unconscious. A supporting character is stabbed to death. In one scene, during a heated argument, one woman hears David come in and intentionally falls down a flight of stairs. Two women have an intense physical altercation which leads to both of them being scraped and bruised. One even attempts to choke the other. A character commits suicide. There are some scenes involving blood.

Sex/Nudity: Very Heavy. Sexual dialog is exchanged in the form of text messages. One of the women is sexting with the other’s ex-husband and asks him to go touch his private area. A couple has sexual intercourse 3 times, and it is lengthy. We see a woman’s bare back as she walks into a tub, as well as a partial view of her breast from the side. There are a couple scenes involving lingerie, and there are cleavage baring outfits. One woman tells another that she and her husband use to have sex anywhere and everywhere they could; she also starts describing positions.

Alcohol and Drug Use: There are several scenes involving alcohol, and there is some drug use. A character is encouraged to get “hung-over.”

There are many themes associated with “Unforgettable,” but one that stands out the most, to me, is the divorce and adultery. In this sinful world, some Christians have mixed feelings on this subject. However, the Bible does have a clear message about both of these issues. Clearly, marriage is meant to be a sacred and loving lifetime union, and is sanctioned by God. Divorce is ONLY permitted when a mate becomes unfaithful.

“To the married I give this command (not I, but the Lord): A wife must not separate from her husband. But if she does, she must remain unmarried or else be reconciled to her husband. And a husband must not divorce his wife.” —1 Corinthians 7:10-11 (NIV)

“I tell you that anyone who divorces his wife, except for marital unfaithfulness, and marries another woman commits adultery.” —Matthew 19:9 (NIV)

Some may argue the issue based on the idea that both people deserve the right to be happy. Should they remain in a failing marriage and remain miserable till death?

My position is this: It is true that God does not want us to live in misery. For those who are in an abusive marriage, a divorce is allowed, as this is considered marital unfaithfulness. However, if it’s possible to reconcile with the person, even a small chance, we are encouraged to do so.

Let me also clear that, when it comes to adultery, no action, no thought, no sin is unforgivable… even adultery. Likewise, Jesus asks us to forgive and pray for the adulterer, even in our anger and hurt, when it is the most difficult time to pray and forgive.

“Therefore, confess your sins to one another and pray for one another, that you may be healed. The prayer of a righteous person has great power as it is working.” –James 5:16

“And whenever you stand praying, forgive, if you have anything against anyone, so that your Father also who is in heaven may forgive you your trespasses.” —Mark 11: 25

But before it even gets to the point of divorce, I should redirect your attention to this particular Scripture regarding a HEALTHY MARRIAGE in the eyes of God:

“Wives, submit yourselves to your own husbands as you do to the Lord. For the husband is the head of the wife as Christ is the head of the church, his body, of which he is the Savior. Now as the church submits to Christ, so also wives should submit to their husbands in everything. Husbands, love your wives, just as Christ loved the church and gave himself up for her to make her holy, cleansing her by the washing with water through the word, and to present her to himself as a radiant church, without stain or wrinkle or any other blemish, but holy and blameless. In this same way, husbands ought to love their wives as their own bodies. He who loves his wife loves himself. After all, no one ever hated their own body, but they feed and care for their body, just as Christ does the church—for we are members of his body.” —Ephesians 5:23-30

On the same note, it’s important to remember, when going into a relationship—whether or not it blossoms into marriage, the Apostle Paul tells us that we are to only marry those who are truly regenerated followers of Christ.

“Do not be yoked together with unbelievers. For what do righteousness and wickedness have in common? Or what fellowship can light have with darkness?” -2 Corinthians 6:14 (NIV)

The pacing of “Unforgettable” is solid, and the performances are mostly amazing. Everything you might wish for in a good suspense thriller is pretty much there. BUT, there is an unforgettable amount of objectionable content to contend with, particularly sexual content and violence. Besides clearly being a film for adults only, the worldly content displayed is very negative and disturbing—focused on an evil, demented woman and her abusive mother, complete with with jealous envy, hatred, vengeful wrath, lewdness and lustful sex outside of marriage. No matter any cinematic qualities, discerning Christians will recognize that the content of this R-rated film deserves strong caution, and is unworthy of their time and money.

“Now the works of the flesh are evident, which are: adultery, fornication, uncleanness, lewdness, …hatred, contentions, jealousies, outbursts of wrath, selfish ambitions, dissensions… envy, murders, drunkenness… and the like…” —Galatians 5:19-21 (NKJV)

As the God-inspired Apostle Paul urged the believers in Philippi,

Negative
Negative—I was looking forward to this movie, due to being a fan of obsession thrillers, but was very disappointed. “Unforgettable” is drab and not thrilling at all. The performances are good, but the pacing is very slow, and, like I said, it isn’t suspenseful. I was literally falling asleep during the woman vs. woman fight—trying to kill each other scene. And the ending is a little clichéd and unrealistic; all these people need to do is get a restraining order if they’re faced with the same mess again. A boring cine.

Movie Critics
…slick balancing act of aspirational romance and dark psychology, longtime producer Di Novi enlivens the generic mix with a tinge of camp and a sure grasp of mean-girl dynamics… What’s recognizable and real in “Unforgettable” is the way women can turn self-doubt against one another, and the way jealousy can corrode a soul. …

Sheri Linden, The Hollywood Reporter
…an effective directorial debut… This is a female-driven picture in every way… Katherine Heigl proves she can be very good at playing very bad…
Pete Hammond, Deadline
…there is something horribly enjoyable in Heigl’s villainous performance, along with Cheryl Ladd as her equally unsettling mother… [3/5]
Peter Bradshaw, The Guardian (UK)
…Katherine Heigl is terrific playing against type as a psycho ex in a thriller that isn't memorable enough to deserve the performance. …
Peter Debruge, Variety
…Second-rate psychological thriller can’t live up to that title… [2/5]
Pad Padua, The Washington Post
…might better have been titled “Totally Predictable.” There’s no nuance or mystery here… Do we really need to see a movie about two women locked in mortal combat?… [1/5]
Adam R. Holz, Plugged In