for peril/action, some thematic elements, and brief mild language. 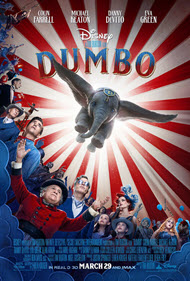 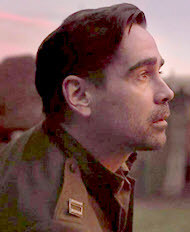 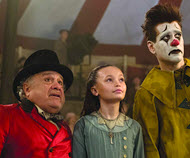 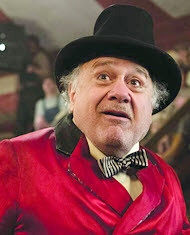 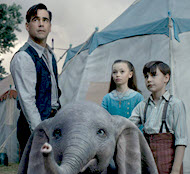 Children need both their mother and their father

Protecting and caring for others

Making the most of our abilities and gifts

Choosing to do what is right, instead of what is wrong

Taking respectful care of the animals that our Creator has provided

History of exploitation of people and animals in the entertainment industry

Elephants in the Bible 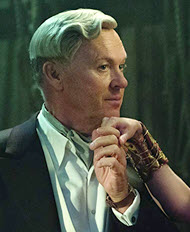 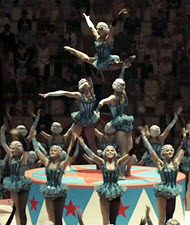 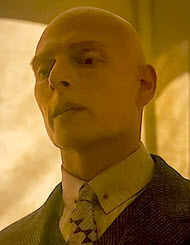 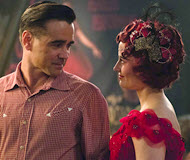 Tim Burton seems a strange choice to breathe live action life into one of Disney’s most beloved early classics, but the result is a funny, touching, and sweet story about a little elephant who learned to fly.

In the aftermath of World War I, the Medici Circus struggles to survive. Half the acts have either left the big top or died of influenza. The owner, Max Medici (Danny DeVito), has sold whatever he could to stay afloat—and purchased a brand new pregnant Asian elephant. He hopes her baby will draw big crowds. After her arrival, Holt Farrier (Colin Farrell) returns from the war less an arm, and unsure how to reconnect to his kids, Milly (Nico Parker) and Joe (Finley Hobbins).

Having lost their mother, the two children are struggling to cope with their grief. Since Max sold the horses Holt and his wife used in their act (plus most of their furniture), he gives Holt a new job—look after the elephants. Though displeased with being demoted, Holt’s sensitivity and compassion enables him to befriend Mrs. Jumbo. But Max’s dreams of luring crowds crash down to earth with baby Jumbo’s arrival. His large ears make him a “freak.”

When little Jumbo’s first appearance under the big top leads to disaster, Max demands his money back for the “rabid” elephant that went crazy in defending her baby and caused a man’s death. In comforting the depressed baby elephant, the Farrier children discover an astonishing secret. He can fly.

Other than “Maleficent,” the live-action Disney adaptations have not impressed me. I do not see the need to remake successful films frame-by-frame. “Dumbo” is the exception. Tim Burton kept the basic premise, but crafted a family-oriented, sentimental, and touching story, seen through the eyes of humans and Dumbo alike. I loved how he let Dumbo become a hero in his own right and gave him the motivation to fly, because he thought it would help his mother. The ending is also much more satisfying.

Since many children were in my screening, I saw how they reacted. Most of them loved it, but there were things too intense for the most emotionally sensitive kids. These are the heartbreaking scenes of Dumbo being separated from his mother, being bullied, and made ashamed of his big ears (though Dumbo doesn’t speak, his expressive eyes reveal his shame and sadness). Other moments that may scare little ones are when he almost falls off a high platform (twice), has to face down an out-of-control fire, and on “Nightmare Island” where guards think dangerous creatures have gotten out and stalk them through the mist.

There’s a fair amount of violence. Elephants rampage and knock down a circus tent, killing someone who was earlier abusing them / yelling at them and poking them with sticks. Dumbo sprays people in the face with water who mock his ears. The crowd throws things at Dumbo. Two characters almost fall to their deaths. A fire turns a theme park into an inferno. The villain talks about killing Dumbo’s mother and turning her into a pair of boots.

There are three uses of “hell,” and one unfinished s-word. Phrases include: “Good g*d!” and “What the h*ck?”. A woman steps in elephant excrement. Colette wears a few revealing outfits, and there are shirtless males.

It’s true that elephants form deep bonds with their offspring. Elephants who have lost their calves in the wild to death mourn them and return on their migration to mourn them again—they do “remember.” This film knows that and creates a powerful, realistic bond between Dumbo and his mother. His separation from her forms a large part of the story—and makes their happy ending even more joyfully poignant.

It has a pro-animal message, but it isn’t radical or inconsistent with our Christian understanding of “taking care of the animals.” Holt and his children step up and protect Dumbo and his mother from those who want to harm them (though they break the law to do it; it may spark a discussion with your kids about whether it’s okay to “steal” for a good cause).

The tale did not feel too long, and most of the acting was terrific. Burton has dialed back his surrealism to present a more whimsical circus world, still with touches of his authentic style (he uses the same costume designer, Colleen Atwood, and her work is as beautiful as usual). There are a few references to the original film (snatches of songs and tunes, pink elephants on parade in the form of bubbles, and Dumbo visiting his mother in the prison wagon). I loved it, as did most of the adult audience.

A much more complicated and “grown up” story than the original film, “Dumbo” explores loss and depression, the need to accept and love one another, the importance of mother and fatherhood, that it is okay to be different (it’s what “makes you special”), and brings its humans and animals alike to a moment of crisis, where they must do what is right—all powerful lessons for children. It also contains a lot of real-world parallels as thought-fodder for adults (the irony of a soulless corporation gobbling up the circus and not caring about the individual was not lost on me, in the light of Disney absorbing half its competitors). Burton lets the villain create his own downfall, he lets the hero get the girl, and he gives the little elephant a touching and a happy ending.

It’s not Tim Burton’s usual horror-style fare. This one seems more personal, sweet, and sincere… as if he has realized what C.S. Lewis knew—that one day, grown-ups will be old enough to start reading fairy tales again.

A generally enjoyable family movie, rare to find, these days. Not really suitable for kids below about 10 years of age, as it’s got some scariness, though it is brighter than the cartoon, and not a negative film. Some issues will require explanation for young people. We didn’t hear any very strong language but maybe a few OMGs. Overall, not too bad.
My Ratings: Moral rating: Better than Average / Moviemaking quality: 3

Ruth, age 32 (Australia)
Positive—Pleasantly surprised! This live action version of the Disney animated classic was very well done. It weaves elements of the beloved story of Dumbo with a new story that involves the entire circus family. Dumbo, the big-eared baby elephant learns his disability gives him the ability to fly. He is supported and encouraged by many empathetic and compassionate characters, each of whom are using their own abilities and disabilities to make a living. Corporate greed attempts to exploit Dumbo.

I like the way director Tim Burton created a turn-of-the-century look and feel while toning down his normally surreal and macabre perspective. Surprisingly, amusingly-and daringly, he lampoons the Disney Corporation itself. The entire cast was exceptional. Danny DeVito stands out as the circus owner and ringmaster. Family friendly. Nothing objectionable. Very little ones may be distressed at the treatment of Dumbo’s mom, Mrs. Jumbo, and some bullying, but that is an important part of the story in the original and new version.

Overall, “Dumbo” is an encouraging tale about overcoming disabilities and discovering ones own unique talents, courage to use them, and the importance of loving and supportive family and friends.
My Ratings: Moral rating: Better than Average / Moviemaking quality: 5

Tori, age 50+ (USA)
Positive—I truly enjoyed this movie. I thought that Tim Burton was a dark kind of director, and it shows in this movie. However, it is still a decent family movie compared to a lot of secular films out there. It has the same theme of the Disney formula: the bad guys go after innocent children because they have something that could make them rich. I think of “The Rescuers” or “101 Dalmatians.” In this film, Dumbo is the innocent child who has the ability to fly which could make a rich circus owner even richer.

Overall, the film is family-friendly. Parent should take their children to see this picture. It is one of the few that is safe to watch.
My Ratings: Moral rating: Good / Moviemaking quality: 4½

Karen, age 52 (USA)
Positive—I do not understand why this remake is not liked very much, as I think it soars with the original movie. I would have added a few touches of my own, had I written the script; but the film is almost perfect. The acting, writing, cinematography, etc. is Big Top worthy, as one expects from Walt Disney Studios.

There is some violence, thematic elements, and three uses of a mild profanity, with a moderate profanity is nearly said but cut off (the latter of which was completely gratuitous, and surprising to me that such a word is used in a Disney movie). “Dumbo” (2019) is rated PG.
My Ratings: Moral rating: Better than Average / Moviemaking quality: 5

Secular Movie Critics
…something is definitely off in the balance. The new “Dumbo” holds the attention but too seldom tugs at the heartstrings. …
David Rooney, The Hollywood Reporter
…fails to make the heart soar… [2/4]
Robbie Collin, The Telegraph [UK]
…ultimately rather mirthless remake… It transforms a miraculous tale into a routine story by weighing it down with a lot of nuts and bolts it didn’t need. The character of Dumbo is still touching, but the tale of entrapment and rescue that surrounds him is not. It’s arduous and forgettable, done in busy italicized strokes, and apart from that FX elephant the movie doesn’t come up with a single character who hooks us emotionally. …
Owen Gleiberman, Variety
…more mayhem, more angst, twice the unethical-treatment-of-animals pathos and five times the number of tear-jerking elephant mother/son separations and reunions. This movie also offers less: less wit, less charm, and only a few scraps of the old movie’s crucial songs…
Michael Phillips, Chicago Tribune
…story is decidedly, deliciously dark, veined with thin layers of Burton’s trademark macabre sensibility…
Michael O’Sullivan, The Washington Post
…a grim tone and a dead soul. It’s astounding that Tim Burton and his colleagues could have created such a downer from a long-beloved source of delight. …
Joe Morgenstern, The Wall Street Journal
…The new “Dumbo” is ostentatious and overworked, less a work of imagination than a declaration of how imaginative Burton thinks he is. …
Stephanie Zacharek, Time
…cardboard characters… it’s a tonal mess, broken up by off-putting moments… “Dumbo” is filled with overwhelming cuteness but doesn’t ever soar… full of spectacle and story, but sadly, lacking in substance… [C-]
Kimber Myers, The Playlist
…Gloom and doom hang over Tim Burton’s live-action (ish) remake… He remade it twice as long, with half the heart. …a shiny but bloated, glum affair that feels “BIG EVENT” in scope, and depressingly heartless in execution. …[2/4]
Roger Moore, Movie Nation