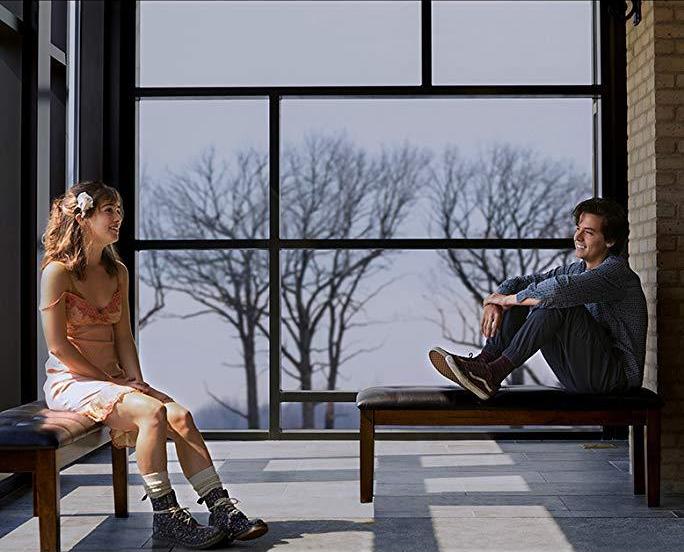 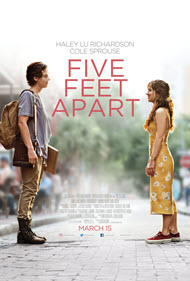 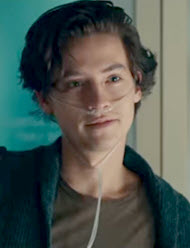 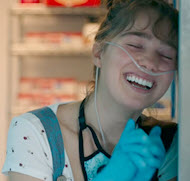 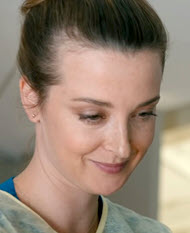 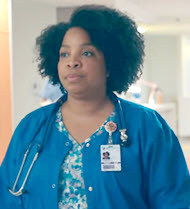 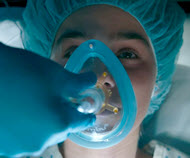 ORIGIN OF BAD—Why are there bad things in our world? Answer 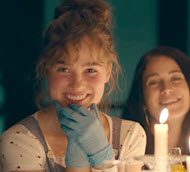 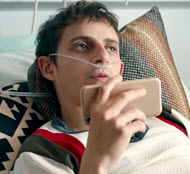 “Can you love someone you can never touch?”

Stella (Haley Lu Richardson) has been managing her Cystic Fibrosis for many years along with her family and best friend Poe (Moises Arias). Though she clings to the hope of a lung transplant and puts on a brave smile for her friends and her on-line video diary, she’s deeply struggling and starting to unravel.

Will (Cole Sprouse), on the other hand, wears a defeatist attitude about his CF and life. He expresses this through sarcastic remarks, dark sketches and noncooperation with his medication regimes. His risk-taking drives Stella to distress.

Put these two together, with a spark of new attraction and the torturous fact that they can never touch one another without jeopardizing the other’s life, and it makes for an interesting perspective on teen attraction and sacrificial love.

“Five Feet Apart” is a well-made film which I’m told takes its dialog word-for-word from the novel. I appreciated its realistic depiction of medical routines and unwell bodies (largely thanks to clever make-up), brilliant and sensitive acting, and overall artistic quality. Unrealistic aspects are few and far between.

Given that Stella and Will are facing such short lives and potentially difficult deaths, it is not surprising that time is spent dwelling on whatever hope they may have, and how they can regain any kind of control. Though they embrace art, meditation, friendships and various therapies to attempt care for their minds, bodies and souls, they neglect to turn to their Maker who knows their deepest needs and can give comfort that even death can’t steal. Though Stella reads a book about Life, Death and Immortality, she seems to not pursue the One who is immortal and offers eternal life and freedom from Earth’s evils.

No matter how dark, there is hope

Instead, the most striking theme of the film is the idea that human touch—particularly from a partner—is essential for human coping. This reminded me of how Jesus, too, went out of His way to kindly touch many of the people He helped, especially those deprived of the touch of their loved ones due to their disease.

Unfortunately, however, the assumption of this story is that the kind of touch teens need includes sex with their partner. A lot of screen time is given to CF sufferers longing to ‘be normal’ and to touch one another the way they want to. This is an understandable struggle for them, but also a worldly perspective, as sex is designed by God to only occur within the safe commitment of a marriage relationship.

Is formalized marriage becoming obsolete? What does the Bible say about marriage? Answer

How can I deal with TEMPTATIONS? Answer

How far is TOO FAR? What are the guidelines for dating relationships? Answer


About ANGER in the Bible

The other moral issues highlighted are when and how it is okay to touch others, the importance of boundaries and personal consent and the impact that our choices have on those around us.

Given the intense subjects of the film, intense forms of self-expression are not surprising. Characters yell, cry, swear, demand, lash out and blame. Someone sketches negative and angry images, including a grim reaper to signify impending death.

Apart from this there are no direct references to God, angels or the occult—apart from swearing. There is about as much swearing as is common among teenagers who are experiencing difficulties.

“Five Feet Apart” sheds light on what occurs behind closed hospital doors for young people who face serious illnesses such as Cystic Fibrosis. It contains many beautiful and thought-provoking moments which contain valuable lessons for viewers. It cherishes life and hope.

It upholds the importance of not facing life alone. And it will encourage teen and young-adult viewers to imagine entering exclusive relationships which can grow and develop strength even without touch and sexual contact.

Characters discuss the value of life, someone’s conviction that there must be something more beyond death, and that, “To understand life you have to look at death.” It is said, “Maybe death is just the next life an inch away.”

As Christians, we know how true this is, because once we’re saved by Jesus advocating for us to God, Heaven is our spiritual home to return to following physical death. We have an inheritance that nothing can steal: not even death. So death has lost its sting.

Despite lacking the above hope, many of the heroes do great things and teach each other good character. In relationships, they grow in terms of using forgiveness, courage and selflessness to overcome fears and difficult realities. This matches the kind of love taught by Jesus and His apostles, rather than a merely romantic form of love.

There is a preoccupation with sex, that’s for sure. This does not involve the usual combination of flashy cleavage, dirty dancing, suggestive comments, muscle flexing and sex scenes, but it is nevertheless frequently referenced and will stick in viewers’ minds for days, if not weeks. Over 20 comments or images include sexuality.

There is a scene of a woman standing at the bathroom mirror in her bra while washing. There is one pool scene where characters strip to their underwear, and the camera lingers long on each area of the front of their bodies. Among all these sexual references there is no mention of marriage being a consideration, except perhaps in the case of a Gay friend.

Suicide is mentioned, and a little dread is built regarding this. Frustration is a frequent occurrence, and the quality of acting causes viewers to share in the shocks, distress and suffering of lovable characters. “Preemie” babies are part of the story too.

There is very little violence, apart from what I’ve already mentioned, because the main characters are not able to touch one another. The most violent moment occurs when someone trashes their own room due to the agony and anger of grief.

At times some sinful and dangerous behaviors are depicted in a way that could be perceived as promoting them, or at least certainly not condemning the wrong choices. Some messages are unhelpfully vague, such as “Touch him. Touch her.” This I could easily imagine leading teens into temptation or hasty folly.

I’ll also mention that there is plenty of coughing, mucus, vomit, choking and struggle to breathe. Medical emergencies occur.

Sexual references: • Bikini try-ons (over clothes) • “too trampy or not trampy enough” • “use protection” • sneaking into a room for sex • impolite comments about this • discussion of 3 Gay relationships • woman twice shown topless except for bra • man once shown topless • sex joke disrespectful to Catholics • character says she’s choosing a dress because it is see-through • discussion of sexiness • foreplay scene • a slow stripping off to underwear (male and female) • “screw him” • latex protection (regarding gloves)

Drugs and Alcohol: Champagne or white wine is consumed at a secret party, possibly while one or more attendees are underage. A character speaks in a slurring, drugged manner while an anesthetic is wearing off.

Taken altogether, I do not think this film is suitable for its target audience of teenage girls. Its emotional intensity and focus on sex make it sure to unsettle and confuse some. Yet it is a film with some value and that may be of interest to discerning adults—with a warning to beware of the sexual content, bad language and heavy themes.

Secular Movie Critics
…elevates the sick teen genre with a poignant love story… incredibly assured, deeply effective filmmaking…
Katie Walsh, Tribune News Service
…an infuriating and unenjoyable take on first love…
Chelsea Phillips-Carr, The Globe and Mail [Toronto]
…dull craftsmanship… recycled lovey-dovey remarks…
Carlos Aguilar, The Wrap
…This sweet romance will break your heart… The movie is smartly paced… You not only want what’s best for them, but believe it can actually happen. …[3/4]
Johnny Oleksinski, New York Post
…The film becomes more exhausting than tense. In the end, all that manipulation backfires. Unlike the best of its genre, the rote “Five Feet Apart” isn’t wrenching enough to jerk a single tear. …
Caryn James, The Hollywood Reporter
…a mushy, three-hankie weeper that is aimed squarely between the eyes of every 15-year-old girl…
Michael O’Sullivan, The Washington Post
…groan-inducing canned lines… shamelessly jerking the audience’s tears with one schmaltzy plot contrivance after another… the film still manages to capture the conundrum of being young and deeply aware of one’s own mortality in admirably blunt ways. [2/4]
Keith Watson, Slant
…never packs the emotional wallop it so obviously, self-satisfyingly, believes it does…
Ally Johnson, The Playlist
…it tries way too hard on the melodrama front. Being a teenager is difficult enough. Being a sick teenager is presumably that much harder. Being a teenager in “Five Feet Apart” means suffering from something else, in addition: overkill. And that’s deadly. …
Bill Goodykoontz, The Arizona Republic
…But Haley Lu Richardson’s in it. She’s excellent. …In “Five Feet Apart” she goes 10 rounds with dreckdom, and wins. Scene after scene the movie becomes a two-hour demonstration in the art, craft and mystery of what a performer can do to make you believe, in spite of the things they actually have to say. …
Michael Phillips, Chicago Tribune