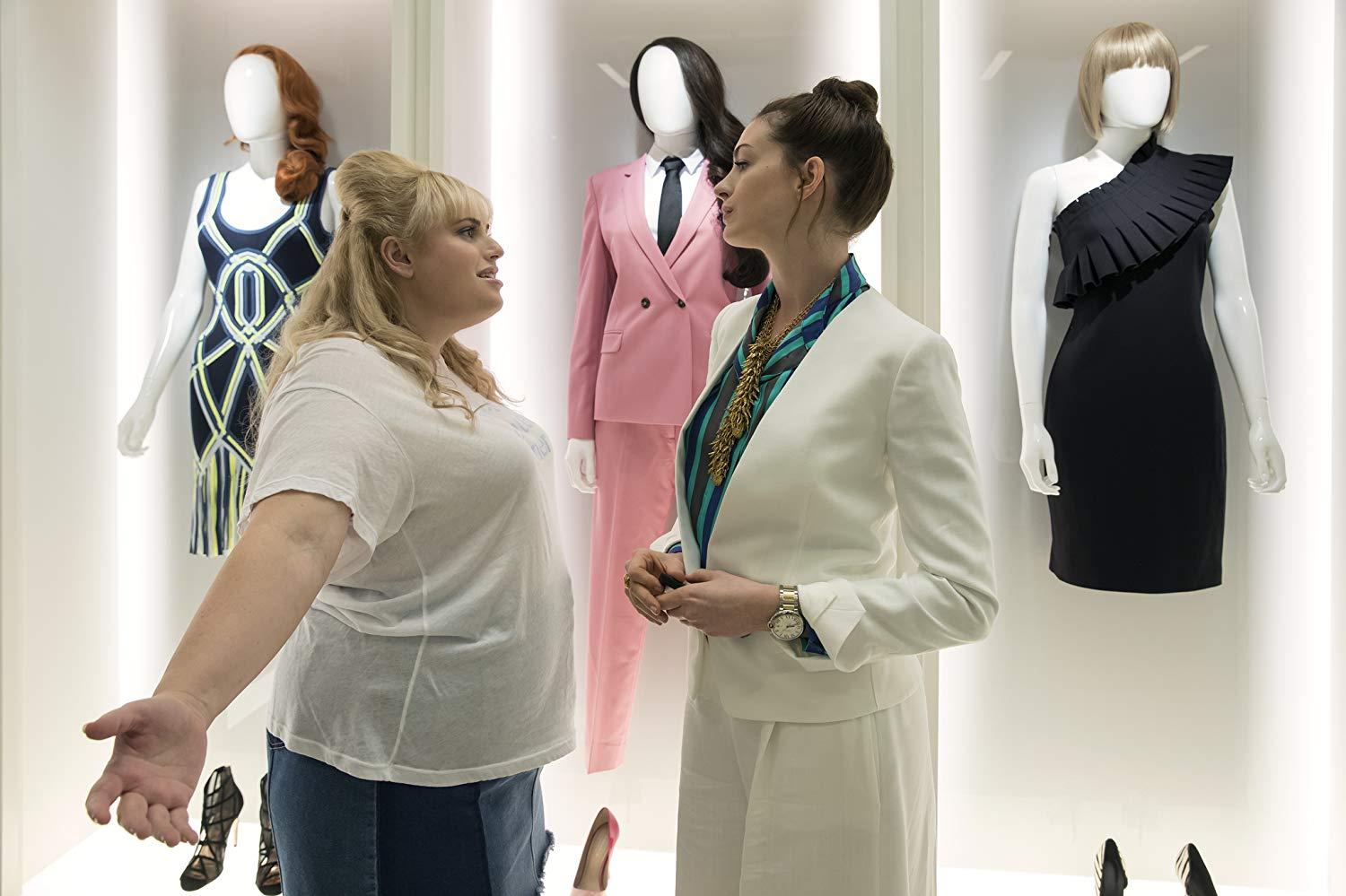 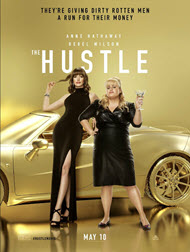 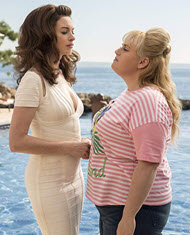 rom the trailer, “The Hustle” looks like it could be a fun and glamorous with glints of gold… but, in reality, it is more like fool’s gold.

Basically, an established “con-artist” happens to stumble across a bumbling young scammer. Admiring each other’s skills and achievements, the older takes the younger under her wing and shares her know-how. A falling-out leads them to fiercely compete with one another. Who will lose the bet and be forced to leave town? Who will get rich? Will the Police or victims thwart their schemes? Will the women destroy each other before either one reaches her goal?

A glance at the trailer gives hints that the foundation of this story is a ‘Sin is Fun’ worldview. Sure enough, money-grabbing, seduction, lies and revenge do form the backbone. It’s another Getting-The-Crooks-Back tale, but this time the heroes are far from innocent or repentant themselves. Plenty of screen time is also spent on relational development of a professional friendship and a blossoming love interest, such that audiences bond with the protagonists and feel a false sense of their hearts being ‘good’ deep down.

To be fair I must acknowledge that there are several enjoyable aspects to this movie. The roles demand and showcase impressive acting as the stars use multiple foreign accents and quickly change moods to suit their devious purposes. Costuming, make-up, wigs, photography and comedic timing are well done. Certainly, it has quite an appeal for many women visually. BUT…

Be under no illusions: Beneath the pretty coating, it is false; it is wickedness; it is dirty.

Main characters are not seeking to do good at all—ever. Not in relationships, work, worship or finances. They are selfish and shallow.

Lack of respect for people is shown as ‘normal’—especially for men (I wonder why none were in the cinema with me and dozens of other women?). Money and winning are the aims for these characters, who will do whatever it takes. Constant lawlessness occurs and is not condemned. Dangerous living and ruthless ambition are promoted.

Offensive material can be found in “The Hustle” in every category that we at Christian Spotlight look out for—most being gravely irreverent against God, His good creations and His wise establishment of law and order. This includes violence, profane use of our Lord’s name, nudity, temptations of the eye, vulgarity, misuse of sexuality, sensuality, impurity, worldly attitudes and ways, lying, breaking the law, murder references and torture.

The script is full of crudity. Due to its “Crime Comedy” genre and bizarre approach, it expects to get away with inventing new ways of doing evil and all manner of shocking language. My jottings about ‘concerns’ were twice as long as usual, and I can’t bring myself to list the phrases for you (however a summary is given later). As for so-called humour, most jokes are insults or sexual. Men are nearly always portrayed in a negative light, which goes beyond feminism into real hateful conduct. Seductive dances, groping and sexual requests are all forced upon others—mainly men.

You will notice that I rated this movie “EXTREME” for its Vulgar or Crude Language. This is the worst rating it could receive and the first time I’ve had to do that. I can hardly think of a curse word that “The Hustle” does not contain.

God’s and Jesus’ names are profaned 4 times; H*ll is used as a curse 4 times; other variations of ‘d*mn’ and ‘OMG’ occur

Other worrying inclusions are Moderate to Heavy use of Alcohol, Smoking, Drugs, Gambling, mock Horror and preying on the vulnerable or people with a disability. Some jokes could be perceived as Racist, Sexist or Sacrilegious.

Not only is the film awful in what it does involve, it totally lacks any good lessons or themes to build on in discussion with young people or unbelieving friends. I can’t find even one pure or positive role-model, event or gem of wisdom.

If you are still considering whether to see this movie, please be on guard against the devil’s schemes. Viewers will struggle to remove from their memory some of the images and words from “The Hustle”, which evoke shocked gasps, pained groans and covering of the eyes.

Apart from all I’ve already mentioned, there are poor-taste uses of the ideas of karma, Medusa and Nazis. There are several disturbing scenes made to look like a Horror flick. Even the ‘best’ parts of it all are tainted. And of course there is an enormous

But what does the Bible say in answer to the key topics and themes raised by “The Hustle”?

Firstly it should be said that maleness and femaleness are designed to be good and wholesome and respectable. The suggestion that males are merely “dirty rotten men” and deserve to be “robbed blind” if they look at a woman in the wrong way or exploit her, is totally unsuitable. Revenge is not the answer when mistreatment has occurred, and in response to our natural longing for justice, God’s Word advises: “Do not take revenge, my dear friends, but leave room for God’s wrath, for it is written [in Scripture]: ‘It is mine to avenge; I will repay, ’ says the Lord.” (Romans 12: 18-19)

Secondly, the sad fact is that it’s true that people do and say horrible things to each other, but God is not unaware. He cares and is willing to show us the way out.

A song addresses this:

“In his arrogance the wicked man (person) hunts down the weak,
who are caught in the schemes he devises.
He boasts about the cravings of his heart;
he blesses the greedy and reviles the LORD.
In his pride the wicked man does not seek Him;
in all his thoughts there is no room for God…”
“Why does the wicked man revile God?
Why does he say to himself,
‘He won’t call me to account’?
But You, God, see the trouble of the afflicted;
You consider their grief and take it in hand…”
“You, LORD, hear the desire of the afflicted;
You encourage them, and You listen to their cry.”
—Psalm 10:2-4, 13-14, 17

This comforts us that God knows all about the deceptions, revenge and greed ruining Earth, even if crooks think nobody sees. These people who are so interested in jewels and gold would be wise to heed ‘The Golden Rule’: “Do to others what you would have them do to you” (Matthew 7:12). Otherwise they are sure to find that the Lord Jesus—Who uttered those words and personally felt the sting of injustice and insults—will on Judgement Day visit on them suitable punishment for the wrongs they’ve done to others.

But let us also humbly recall that we are not innocent of all sin either. We often itch to break rules and live our own way:

“Everyone who sins breaks the law; in fact, sin is lawlessness. But you know that he appeared so that he might take away our sins. And in him is no sin.” —1 John 3:3-5

So if “The Hustle” appeals to us women, it may be time to consider why and to recall that it was because of our own rebellion the sinless and royal Jesus had to die to save us. Evil is not just a thing happening ‘out there’ in the worlds of the rich and famous. It can live in any of our hearts if the true Lord is not living there, and it can do enormous damage.

“Those who want to get rich fall into temptation and a trap and into many foolish and harmful desires that plunge people into ruin and destruction… But you, man (person) of God, flee from all this, and pursue righteousness, godliness, faith, love, endurance and gentleness.” (1 Timothy 6: 9, 11)

Please soberly remember that crime, lies and abuses are to be grieved, and decline to support films built on them. I cannot recommend this film for anyone, no matter how mature or well-protected, as it will inevitably do harm. Instead I recommend Jesus, God’s solution for a broken world.

Negative
Negative—I really can’t say it any better than the main review! The crudity started from the first five minutes of the movie and never stopped! Based on the trailer, I, too, was expecting a light-hearted, funny remake of “Dirty Rotten Scoundrels,” but this movie was not that. Apparently the only funny parts were in the trailer. I left almost half way through movie! I’m not sure why Hollywood thinks putting vulgarity in movies is a good idea. Skip this movie and don’t even rent the DVD! It’s not worth $1.00!
My Ratings: Moral rating: Extremely Offensive / Moviemaking quality: 4

RD, age 50 (USA)
Comments from non-viewers
Negative—This film is indeed a remake of a remake. Let me explain:

“Dirty Rotten Scoundrels,” starring Michael Caine and Steve Martin and made in 1988, was a remake of a film called “Bedtime Story,” made in 1964 and starring David Niven and Marlon Brando. I’ve seen both those films, but the reviews of this film convince me that Hollywood is nearly incapable of making good films anymore.

“Dirty Rotten Scoundrels” added a bit more risqué humor than the original, but it was never slapstick or insipid.

Watch either of the two previous films. I’m sure I’ve seen detergents that leave a better film than this.

Secular Movie Critics
…“The Hustle” is profoundly stupid and it treats its audience as though they’re even less intelligent than it is. …
Kimber Myers, The Playlist
…catastrophically unfunny… Anne Hathaway detonates a megaton blast of pure unfunniness in this terrifying film. …[1/5]
Peter Bradshaw, The Guardian (UK)
…flop… enjoyment-free… cringe-inducing… [1/5]
Joshua Rothkopf, Time Out Chicago
…buckles under the overbearing weight of its own vulgarity. Avoid the dirty rubble by all means. An embarrassment to the heist genre, an insult to all existing comedies…
Ella Kemp, Empire [UK]
…Like other gender-swapped films in recent years, “The Hustle” plays the identity politics game as an end in itself…
Derek Smith, Slant
…it’s a dud…
Michael Phillips, Chicago Tribune
…never manages to overcome its weak jokes and tired plot points…
Matthew Monagle, Austin Chronicle
…the movie feels so fast and cheap that it’s hard not to wonder why they’ve made it at all, other than to jump on a small and so-far underwhelming trend in gender-swapping ‘80s remakes (see also: “Ghostbusters,” “Overboard”)…
Leah Greenblatt, Entertainment Weekly