for thematic elements and brief smoking. 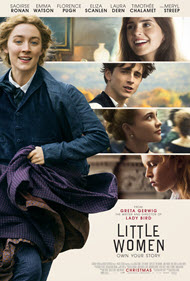 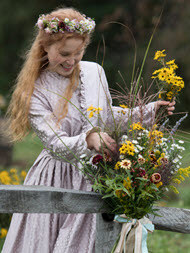 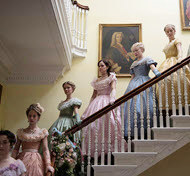 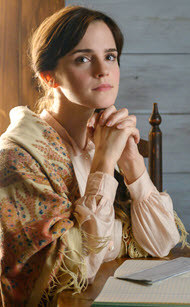 1860s and American The Civil War

Relationships between sisters with divergent dreams 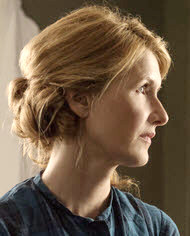 Coming of age / girlhood versus womanhood 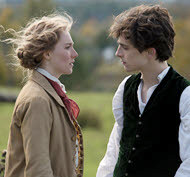 Grappling with life’s many clashing lures—with family, art, money, love, freedom, and the hope of being 100% who you are, creating your own unique story. 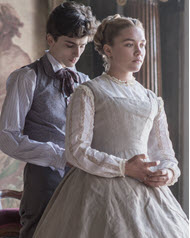 Is LOVE a feeling, an emotion, or an action? Answer 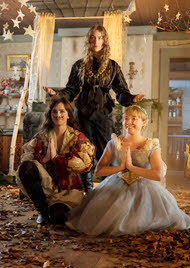 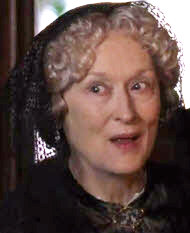 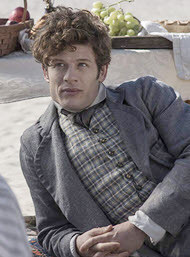 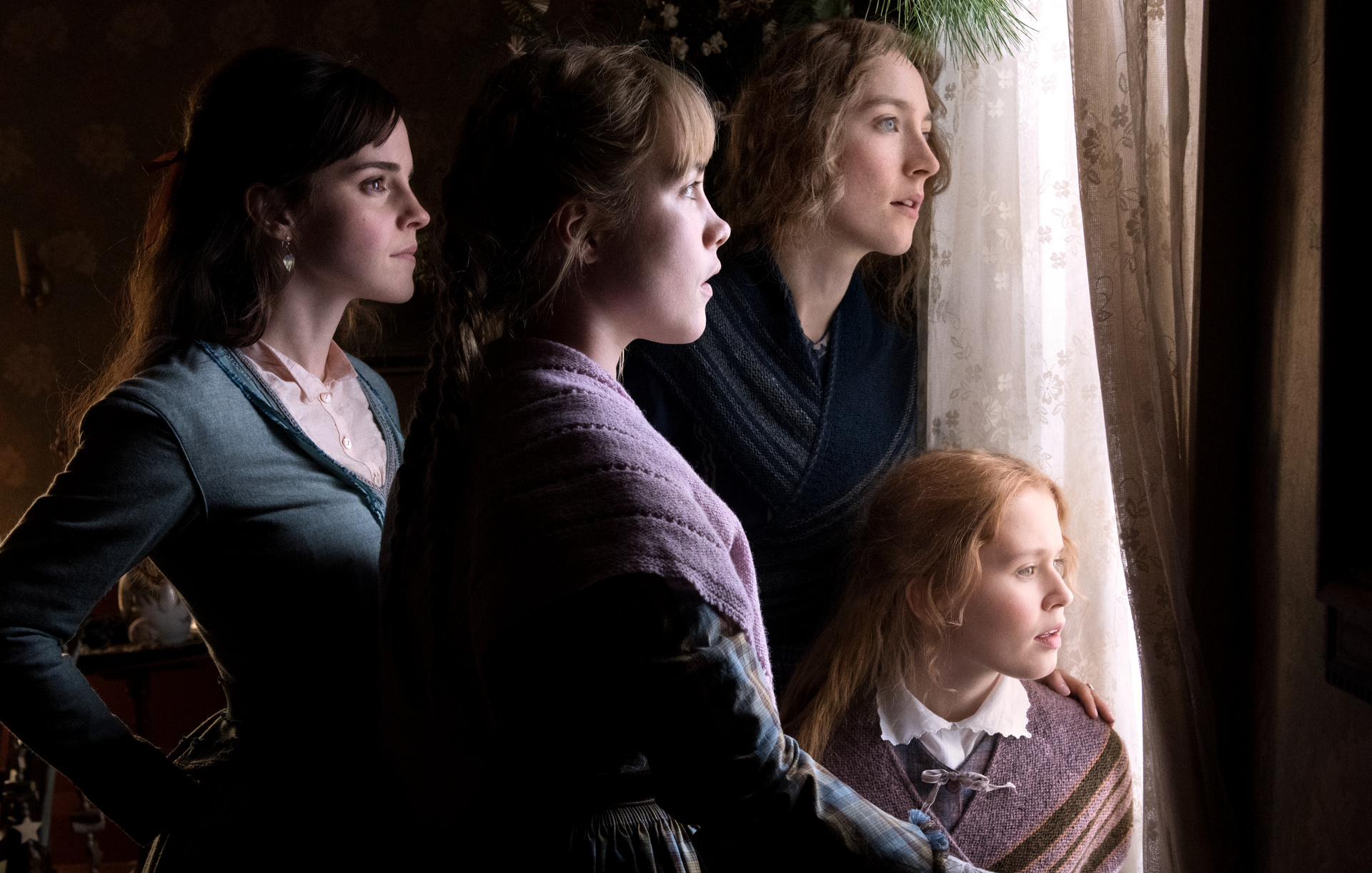 Based on the beloved novel by Louisa May Alcott, “Little Women” is a humorous, touching, and memorable tale of four sisters on the cusp of womanhood.

Rambunctious tomboy Jo March (Saoirse Ronan) shoves into an editorial office to “sell a story for a friend.” She sits through a scathing criticism and agrees to the proposed changes, so she can earn enough to help support her ailing sister, Beth (Eliza Scanlen). When the downstairs professor, Frederick Bhaer (Louis Garrel), takes an interest in her work, she allows him to read a few of her sensational stories. Alas, he “does not like them” and, her feelings deeply hurt, Jo flounces upstairs, determined never to speak to him again.

Her elder sister, Meg (Emma Watson), is struggling for contentment, since her marriage to John Brooke (James Norton) does not allow her to purchase the beautiful things she covets. And the youngest March sister, Amy (Florence Pugh), travels across Europe with her crotchety Aunt March (Meryl Streep), desperate to either become the best artist she can be, or to marry into a fortune. On a ride in the park, she meets up with their childhood friend and neighbor, Laurie (Timothee Chalamet), who has allowed his melancholy after a rejected marriage proposal to turn him into a wastrel. Seven years earlier, the sisters met Laurie at a local social event. Little did they know a wild dance in secret and a twisted ankle would change all their lives forever. And, eventually, help Jo find her true voice as an author…

Unlike all other adaptations, this one starts in the middle and shows earlier events through flashbacks, to great success. It not only works as a narrative device by keeping up the momentum, it helps soften the blows—after losing a main character, we see them again at a much happier time in their life. The only sacrifice in the script is Professor Bhaer, who does not get much screen-time, but the audience loves and invests so much in Jo, that we believe in her fondness for him even if we have had little time to share it.

The writer and director, Greta Gerwig, allows all the sisters to shine, even though she frames the film, as she should, as “Jo’s story.” That is where its strength lies—as much in Jo’s passion for words, her frustration as a budding female author in a time when men dominated the bookshelves, and her ambitious desire to forge her own life through her pen, as in her tight-knit bonds with her sisters.

The girls feel real, both in their interactions as siblings (they quarrel, forgive, talk over each other, and tease each other) and in their failures and triumphs. In the book, Christianity is the driving force behind their collective desire for self-improvement. They wrestle with their sins (Amy’s is vanity, Jo’s is anger, Meg’s is conformity, and Beth’s is excessive shyness) and learn to become better. The film shows them improving, and Amy has a great deal of influence on the wayward Laurie, but with no mention of their beliefs. Marmee (Laura Dern) confesses to Jo she is “angry almost every day of my life,” but over forty years, has learned to curb her temper. The film casts them in a positive, but revolutionary light. They take a poor family their breakfast on Christmas morning, while in the background believers trot into a church building.

Content-wise, there is little to discourage family viewing. The usual thematic themes are present (the illness/death of a family member; a girl falls through the ice on a pond and almost drowns; Jo is forever punching Laurie on the arm or throwing pillows at her sisters). Jo complains she cannot support herself. Aunt March says she could, if she wanted to own a “cat house” (brothel) or become an actress which is “the same in my mind.” Meg wears a low-cut dress at a dance. Amy cries out, “Oh, my God!” in delight when her father comes home. Jo uses various non-profanities as exclamations (such as “Christopher Columbus!”). Laurie is drunk in one scene (Amy berates him for it).

There is one “dig” at the current political situation, when Professor Bhaer says he must travel west to where people have “less prejudice against immigrants.” Marmee says in one scene she has spent most of her life “being ashamed of her country” (presumably for indulging slavery, though that is not clear). The sisters each have feminist speeches (Jo says others should know women for their minds and souls, not just their marriage prospects; Amy rants about having no rights and not owning anything once she marries, even her children; Meg tells Jo “we may not have the same dreams, but mine are just as important”—to be a wife and a mother).

Every twenty years, there’s a new adaptation of this beloved novel. Most of them leave out the religious underpinnings but they’re so much a part of the narrative, Louisa’s desire to raise up a generation of “little women” of virtue and goodness still shines through. Here, the cast is excellent. The girls have a palpable sisterly chemistry and play off each other well. The writing allows Amy and Jo to shine. The costumes are authentic to the period. Gorgeous autumn colors, winter snowfall, and spring flowers fill the screen with joyous color.

I took my mother to see it. We laughed, we cried, and we agreed, it’s a beautiful tribute to one of our favorite books.

Positive
Positive—With Meryl Streep, Chris Cooper, and Bob Odenkirk, I would pay to watch this movie for the supporting cast alone! Laura Dern was also wonderful as Marmee. The “”little women” were all cast well and the direction was terrific, as was the music, costuming, and production design. Best of all there was almost nothing offensive, so I never found myself wincing at the dialogue or having to worry about someone’s clothes coming off. I am thankful I was not very familiar with the story so I could be surprised as the plot played out. Although clearly a story for a female audience, I make no apologies for liking this so much. Any movie made as well as this is, with virtually nothing offensive in it, is worthy to receive my high accolades.
My Ratings: Moral rating: Better than Average / Moviemaking quality: 5

Jeff Leslie, age 63 (USA)
Neutral
Neutral—If you love the book and the story, this production will disappoint you. It does not follow the story line in the novel, and the screenplay jumps around chronologically in a way that can be confusing. I was shocked by the liberties taken with the book.

I loved the 1994 movie. It was well cast, beautifully acted, with great direction and cinematography. This current production makes one wonder why the producers made so many unnecessary changes. There is a harshness to the sisters and the way they relate to each other which Louisa May Alcott would not have approved, in my opinion. I know the movie has been well reviewed, the movie theater was packed, but I am not enthusiastic.
My Ratings: Moral rating: Good / Moviemaking quality: 4

Halyna Barannik, age 73 (USA)
Neutral—I loved the idea of this classic being remade for today’s audience, however, it did not live up to my expectations. Firstly, Meryl Streep must have performed in this adaption out of friendship or favor to the director, because the script made little use of her talents. There were absolutely no lines of brilliance, and no opportunity for Miss Streep to shine in her role as acerbic Aunt March. Why go to the trouble of enlisting a brilliant actress if you are going to give her only a few dishwater dull lines?

The actress who played Amy (Florence Pugh) did not seem to fit the part at all. Her age, husky voice and larger frame were not all convincing as the youngest sister. She looked and sounded older than the older sisters, even in scenes where she was supposed to be a child. She did not come across as the pretty little spoiled child who grew into an elegant, talented beauty. Jo’s character (Saoirse Ronan) certainly dominated the story, which is fine, but allowing the audience to really relate to and know the minds and hearts of the other characters wouldn’t have hurt.

This is not to say the movie was terrible. It wasn’t. It just didn’t live up to opportunity or expectations.
My Ratings: Moral rating: Good / Moviemaking quality: 3

Karen, age 50+ (USA)
Negative
Negative—I was disappointed with “Little Women.” Christians who want to honor Biblical roles for men and women will likely be offended by the film’s subversive take on marriage, the character of men, and God. From start to finish “Little Women” (2019) seems designed to frame feminist ideals in a positive light. The message is loud and clear: marriage is a necessary evil in a society run by ignorant, characterless, dishonest, oppressive, weak-willed men which these “noble and righteous” women must tolerate.

In the Bible, we learn that marriage was not only given as the foundation of family and society. But it is also a spiritual representation of Christ’s union with His Bride, the Church. With it’s over-the-top critique of marriage, this version of Little Women is a shot at the Husband-heart of God and sincere Christians.

I read through the script of the film after seeing it just to make sure I heard what I thought I heard. I did.

The lead character and heroine of the film replies: “God hasn’t met my will yet. What Jo wills shall be done.”)

It’s an elegant film, with nice scenery, clean language, no violence, and high production value. But underneath the beautiful aesthetic it struck me as nothing more than a subtle, calculated attempt to undermine Biblical marriage, men, women, and God.
My Ratings: Moral rating: Offensive / Moviemaking quality: 4

Man, age 49 (Canada)
Comments from young people
Positive—This movie was absolutely amazing. As a fan of the book, I was so excited for a new adaptation filled with a cast of actors that I loved. Still, this move far exceeded my expectations. It was basically the perfect movie. There was absolutely nothing offensive, feminism was portrayed beautifully, and God’s character was shown through the characters themselves in mercy and love. I cannot recommend this movie highly enough.
My Ratings: Moral rating: Good / Moviemaking quality: 5