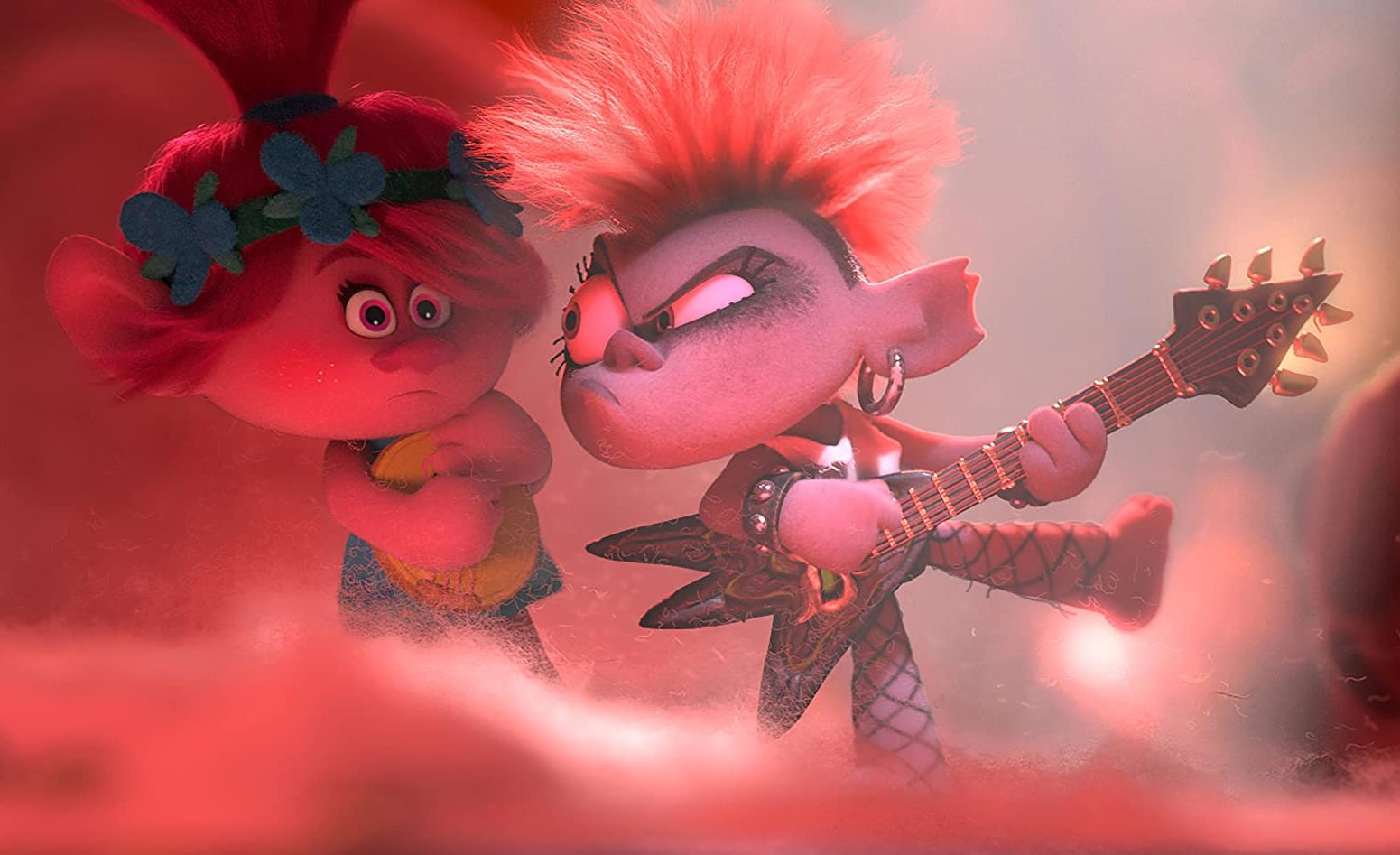 for some mild rude humor. 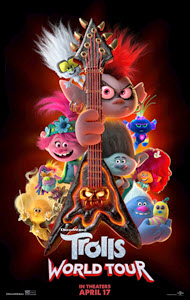 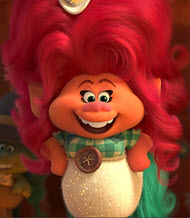 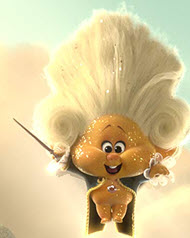 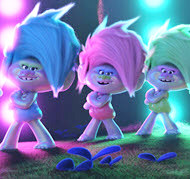 How does modern music and lyrics affect children?

The burdens and pressures of leadership

Importance of listening to advice of others in making difficult decisions

Overcoming fears, anxiety and worry—What does the Bible say? Answer 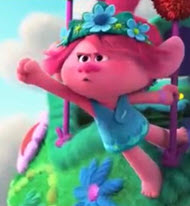 About LYING and deception?

Politically-correct messages in this film 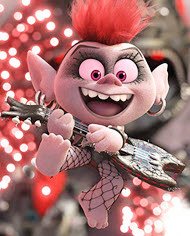 Effects of various lifestyles and worldviews on behavior and life choices 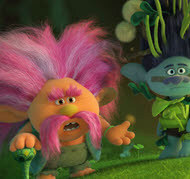 Loving people where are different 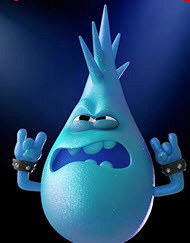 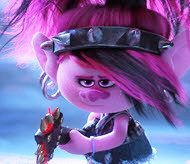 “Trolls: World Tour” takes place shortly following the events of the first Trolls film. Ever since the Bergens and the Trolls were united, things have gone pretty well under the reign of Queen Poppy (Anna Kendrick). Days in the Kingdom of the Pop Trolls now focus mainly on hugs, singing and happiness, which leaves very little to worry about on Poppy’s end. Branch (Justin Timberlake), however, has had to make some major adjustments in his life, including the overall feelings he’s developed for Poppy (you have to realize, Branch felt nothing for anyone or anything for the longest time, so it’s definitely a conundrum for him).

Poppy and her father, the King, soon receive an invitation from a stranger, Queen Barb of the Hard Rock Trolls (Rachel Bloom). For one night only, Queen Barb is inviting all the Trolls from all the regions of the world for a get together to unite the different types of music (Classical, Funk, Pop, Hard Rock, Country and Techno) under one roof. “Wait, wait, wait, this doesn’t make any sense. There are different types of Trolls out there besides us?” Poppy asks her father.

Her father explains that, indeed, six different types of Music Trolls were once united together in one land, each with their own musical string that they shared to create music. However, eventually, the Music Trolls fought with each other over control of which type of music should be heard most frequently (Classical, Pop, etc.). Eventually, it was decided that the different types of Music Trolls separate into different regions, each taking their own string and protecting it, thereby protecting their type of music.

After hearing this, Poppy decides it is time to unite all of the different types of trolls again, as they are “all the same,” as she puts it. She decides to take Queen Barb up on the invitation. Branch however is a bit skeptical of Queen Barb’s intentions and decides to tag along with Poppy. Upon their arrival to the land of the Classical Trolls they discover the place in ruins and find that Barb wants to gather all the strings together to create one power chord that will destroy the other types of music, leaving Hard Rock the only music left in existence.

It’s up to Poppy, Branch, and her friends to stop Barb before, well, the day the music may very well die….

If you were to ask me to list two of the most respected animation studios in the filmmaking industry, I would list Pixar Animation (and perhaps its neighbor Disney Animation Studios) and DreamWorks Animation, and not simply based on the overall quality of the CGI. Rather, I would tell you that these two animation studios are among the elite based on their core messages that are substantive, thought-provoking and, at times, heart-warming.

Why I mention all of this, is that, recently I watched the first “Trolls” film. Though the film came out in 2016, it took me a while to warm up to the idea of watching a film that was solely based on, in my opinion at that time, a means of promoting popular music through somewhat likable characters that are based on toys, and what I thought would be a predictable and cheesy plot.

As it turns out, upon viewing the first Trolls film, I found myself laughing often and at times crying in moments I didn’t think I would. I also found the overall messages of the first film to be genuine and heartfelt; that the world is not black and white and that we must be able to navigate our way through those times that are gray (on a side note, it is slightly ironic that the message of the first Trolls movie, which debuted in 2016, is exactly the message we need to hear right NOW during the COVID-19 crisis affecting us around the world).

Which brings me to “Trolls: World Tour.” Does it have the same amount of heart as the first film? Well, I’m not quite sure. Some aspects certainly bring a sense of deja vu (whether that’s good or not, I’ll let you decide).

The plot in this installment, I feel, is more refined, but also, at times, a bit harder to navigate through, so you might have to really pay attention to truly appreciate the story to its fullest. To the film’s credit, its focus is more on the music, which was supposed to be the focus of the first film (where music seemed like it was more of an afterthought). On the other hand, there are SO MANY musical appearances in this new film from famous and current artists (e.g. “One More Time” by Daft Punk, “Born to Die” by Kelly Clarkson, “Barracuda” by Heart, etc.), that it feels like there are moments the story takes a back seat to promoting the artists, which I’m not sure was a good idea. Additionally, the performances are still as strong in this film as they were in the first.

VIOLENCE: Hard Rock music waves attack some Techno Trolls and split a building. Bat-like creature attacks Poppy’s hair. Trolls are seen being kidnapped by Barb in a couple scenes. A saw cuts a rock troll’s hair in half. Barb cuts a couch in half in anger (brief). An extended chase occurs where someone falls into a mine, comes back out and bites a troll. The Pop Trolls fall off a cliff into water. Branch is hit with a guitar. Trolls are beamed into a spaceship. Some trolls fight each other in a brief scene. A troll is seen sinking in lava (but is unharmed).

SEXUAL CONTENT/NUDITY/SEXUAL REFERENCES: Branch has deep feelings for Poppy but can’t get around to telling her. Poppy briefly showers (covered in bubbles). Guy Diamond’s nudity is covered by glitter. We see Biggie’s rear end when he splits his pants. Branch mentions he has deep feelings for Poppy, but doesn’t know how to tell her. Some male trolls are shirtless. A musician is shirtless and the trolls comment about his chest hair.

LANGUAGE: A few uses of “darn” and “dang.” Other terms include: “balls,” (but later the character says he was talking about cheese balls he made), “sugar,” and “You Suck.”

DRUG REFERENCE: A troll lulls two characters into a state of the equivalent of being high through his saxophone playing.

OTHER: A troll comes in half but is actually two people. A troll is hit with Hard Rock music wavers and turned into a rock and roll zombie. People are seen being turned into music zombies. Guy Diamond (a male troll) is seen having a baby. Poppy goes against her father’s wishes. Barb’s Dad is seen coming out of a bathroom. The land of the Classical Trolls has destroyed charred buildings and burned music. Poppy steals the string. The song “Gangnam Style” is used briefly, and we see a troll’s ears covered.

The main message of “…World Tour” is (to paraphrase a character from the movie) that our differences define us as individuals. We are made to be different, to stand out.

Indeed, God designed us in His likeness and in His image. No one being is perfectly alike. He has designed us according to His purpose (Romans 8:28). Here is what Scripture states about God’s design and purpose for us…

“For you formed my inward parts; you knitted me together in my mother’s womb. I praise you, for I am fearfully and wonderfully made. Wonderful are your works; my soul knows it very well.” —Psalm 139:13-14

“Or do you not know that your body is a temple of the Holy Spirit within you, whom you have from God? You are not your own, for you were bought with a price. So glorify God in your body.” —1 Corinthians 6:19-20

“For we are God’s handiwork, created in Christ Jesus to do good works, which God prepared in advance for us to do.” —Ephesians 2:10

I’m honestly tossed on my feelings about “Trolls: World Tour.” On one hand, the plot is a bit stronger, and it’s nice to see the focus, for once, is on the music. But then again, I weigh these things against an increase in potty humor (slightly), violence (again slightly) and some sexual content/references that, frankly, weren’t warranted. Plus, truthfully, this sequel wasn’t really needed in the first place.

If you truly are interested in seeing this film, parents please view it FIRST and please use prayerful discernment before letting your children watch it. If you’re asking for my opinion, though, I’d say pass on this one.

Secular Movie Critics
…a visually dazzling trip that will keep kids spellbound… To watch it is to be waterboarded by joy. In terms of both visual dazzle and invention and sheer comedic stamina and pep, it handily surpasses the original Trolls from 2016… [4/5]
Robbie Collin, The Telegraph [UK]
…likeable, goodhearted and the cinematic equivalent of a pound of glitter being shot right in your face… no amount of razzle-dazzle can distract from World Tour’s meagre storytelling—or the gnawing suspicion that the proceedings are targeting overstimulated young viewers who just want nonstop sensation. …
Tim Grierson, Screen Daily
…“Trolls World Tour” is the equivalent of jazz fingers being mercilessly waved in your face: sure it's annoying, but after awhile you can't help but smile. … [B-]
Adam Graham, The Detroit News
…witless, joyless… A movie with the power to freeze the mind and make anyone watching just want to stagger away mumbling nothing but “This is awful,” over and over, until the pain goes away. …
Mick LaSalle, Datebook, San Francisco Chronicle
…Compared with its 2016 predecessor, the sequel is duller and more conventional. Still, songs and silliness abound. …
Edward Porter, Sunday Times (UK)
…It's too aimless and loud for grownups… and while there's a lot to look at and hear in a jukebox musical manner, it's hard to imagine many kids understanding jokes at the expense of smooth jazz and yodeling. …
Brian Lowry, CNN
…sugary-sweet… especially for audiences who dig fun tunes and neon-drenched fantasy adventure… not quite as subversive and refreshing as the first “Trolls”…
Brian Truitt, USA Today
…There is something absolutely robotic about Trolls World Tour: the voices, the design, the dialogue, the plot progressions, the break-up-make-up crisis between Poppy and Branch, everything. It’s chillingly efficient, like a driverless car going round in circles. …
Peter Bradshaw, The Guardian (UK)
…Fatiguing for grown-ups, “TWT” may well scare, or at least unsettle, kids under 6. And kids much over 6 are likely to tire of the unrelenting cutesiness. …
Mark Feeney, The Boston Globe