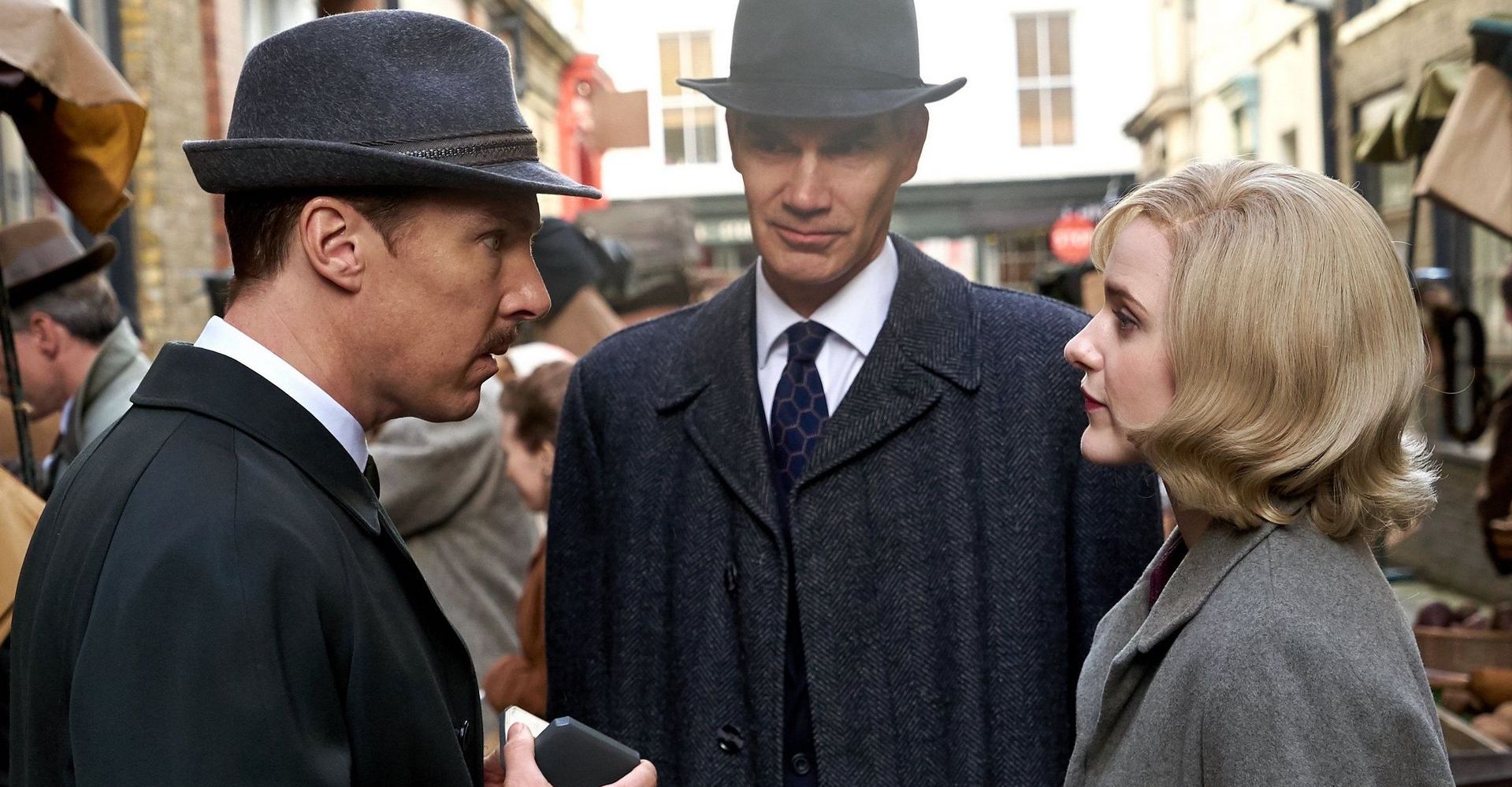 for violence, partial nudity, brief strong language, and smoking throughout. 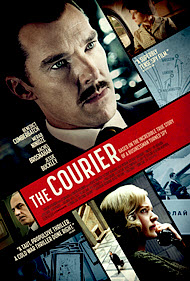 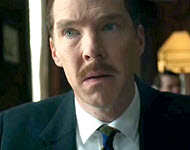 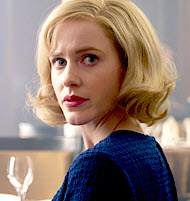 Man who steps up to fill a challenging need

Courage in the face of danger

The Cuban Missile Crisis of 1962 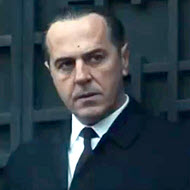 Altering the course of the Cold War 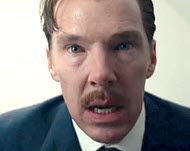 About SPIES in the Bible 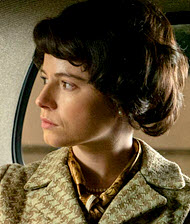 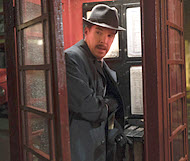 The Cold War heats up in this political thriller from director Dominic Cooke (“On Chesil Beach”).

A Russian spy, Oleg Penkovsky (Merab Ninidze), secretly believes Soviet leader Khrushchev’s (Vladimir Chuprikov) policies and rhetoric have become too aggressive (“…we…will…bury them!”), and that he shouldn’t be in control of an arsenal of nuclear weapons. Penkovsky sends a message to MI6 in London, which outlines his plans to relay top secret information to British Intelligence in exchange for extraction from Russia.

In a bold move, MI6’s Dickie Franks (Angus Wright) and CIA agent Emily Donovan (Rachel Brosnahan) recruit a British businessman, Greville Wynne (Benedict Cumberbatch), to establish contact with Penkovsky. Wynne flies to Russia on a business trip to meet Penkovsky, and the two men begin an association that will lead them into ever greater intrigue and danger.

I’d love to tell you more of the plot, but then I’d have to kill you… and I like you. So I won’t.

There are two reasons I wanted to review this film:

So, have you seen this movie before under different guises? Yes.

Penkovsky’s plan to leave Russia is reminiscent of Marko Ramius’ (Sean Connery) intention to defect from Russia to the U.S. on the eponymous nuclear submarine in “The Hunt for Red October” (1990). Another similarity between these films is Penkovsky’s desire to live in Montana, the same state Captain Borodin (Sam Neill) wants to live in after he’s defected from Russia in the “…Red October.”

Of course, a more recent touchstone for this film is Steven Spielberg’s “Bridge of Spies” (2015). In that movie, also set during the Cold War, American insurance lawyer, Jim Donovan (Tom Hanks) is sent to Berlin to mediate the exchange of an American pilot for a captured Russian spy, Rudolf Abel (Mark Rylance).

There are many parallels between “The Courier” and “Bridge of Spies.” Both films are set during the Cold War and both are based on real events. Also, both Wynne and Donovan are hardworking everymen with no prior espionage experience. They both befriend a Russian spy, albeit for completely different reasons. Both men step up to the challenge (lesser men simply wouldn’t have gotten involved) and exhibit courage in the face of danger.

The script by Tom O’Connor is a slow-boil political yarn in the vein of “Tinker Tailor Soldier Spy” (2011), which also featured Cumberbatch in its cast. For those who enjoy a well-structured plot with riveting intrigue and mild action, this film is for you. Those who prefer more action in their spy film (a la James Bond) might be disappointed by this movie’s slow start and deliberate pacing throughout.

Cooke’s sure-handed direction is further abetted by Sean Bobbitt’s crisp, moody cinematography. Though many of its scenes are shot indoors, the film makes excellent use of its Prague and London locations. Most of the on-location work was shot under overcast skies, which further enhances the film’s melancholy mood.

One of Franks’ and Donovan’s concerns with recruiting Wynne is that he drinks too much. Wynne is asked if he can hold his alcohol. He wryly smiles and replies, “My one true gift.”

Drugs: Smoking is nearly as prevalent as drinking in the movie. People smoke cigarettes in all the places listed above, as well as outside on streets and sidewalks.

Nudity and Sexual Content: There’s only one sex scene, per se, in the movie. Wynne kisses his wife Sheila (Jessie Buckley) on the neck and mouth. They move on top of the bed while still fully clothed; we see their passionate kissing in the reflection from a mirror. The next scene shows the couple in bed under the covers.

Early in the movie, Wynne reveals that he’d been caught having an affair. This is confirmed later when Sheila tells a friend that there’s no way Wynne could be a spy because “he couldn’t even hide his affair from me.” At one point, Sheila also mentions her surprise at how “energetic in bed” her husband was.

After his capture, Wynne is ordered to strip. There are two shots of him completely nude from the front with his hands covering his private area. Later, we see a long shot of a naked Wynne from behind. The deprivation he’s endured in prison accounts for his severely emaciated form. A shocking scene.

Violence and Graphic Content: A man is shot in the head. The scene is quick and isn’t overly gory.

In two brutal displays, a woman is pushed against a wall by an assailant and a man is violently dragged from his home as his wife and daughter look on in terror.

Vulgarities: Compared to other films of its kind, “The Courier” contains less than usual bad language. The movie has 1 f-word (“You f***ing animals”). It contains a few other expletives, such as: a**hole (1) and bullsh*t (1). The phrase “up yours” is repeated over and over again as a drinking salute, and the term “sucking up” is said. The British swear word “bl**dy” is heard twice.

It should be noted that most of the swearing comes from American characters, particularly the CIA boss (Zeljko Ivanek).

There are plenty of historical and ethical aspects of the film that could be broached, such as whether the extreme actions taken by some to prevent a nuclear war are justified, whether physical torture is an appropriate means of extracting information, the effects of adultery on marriages (the violation of the 7th Commandment —Exodus 20:14), and the everyday heroes whose courageous sacrifices often go unheralded due to political expedience and secrecy.

Instead, I’d like to focus on Lying, Spying, and Friendship…

Lying is a recurring issue in the movie. Wynne has a history of lying to his wife (over his past affair). As a spy, Wynne must lie to his wife when she presses him for details regarding his foreign business dealings. Wynne also lies to his British and Russian business associates. He withholds information (lies of omission – James 4:17) from his Russian captors.

Penkovsky tells Wynne he needs to do a better job of keeping secrets from his wife. “You have to lie better. There are good lies. Sometimes a lie is a gift… an act of love.”

This twisted view of secrets and falsehoods would seem to be in direct opposition to the Bible, which is clear-cut about lying. The 9th Commandment (found in Exodus 20:16) says: “You shall not give false testimony against your neighbor.” Another word for “false testimony” is lying. Jesus defines “neighbor” as everyone: family and strangers, friends and enemies (Luke 10:25-37). To paraphrase the commandment, “You shouldn’t lie to anyone.”

But is there such a thing as a good lie? If a lie saves lives is it justifiable? And how do we square that with the righteous standard established in the Bible?

Sadly, the movie doesn’t address these important questions and seems to be pro-lying.

The entire thrust of the movie is about spying. Not only are Penkovsky and Wynne spying against the Russians, the Russians are spying on themselves. At one point, Penkovsky says, “Every Russian is an eye of the State.” These words come back to haunt him later.

The fact that “everyone” (in Russia) is spying on each other fills the film with a pervasive paranoia. It also provides a stark contrast with the scenes in London, where you don’t have the same feeling of anxiety that you do in the scenes that take place in Russia. It’s the difference between a nation spying on its enemies (Great Britain) versus a country spying on its enemies and it own citizens (Russia).

What does the Bible say about spying? The main instance of spying occurs when the Twelve Spies (including Joshua and Caleb) are tasked with locating the Promised Land in Numbers 13:1-33. There are other instances of spies being sent out to report back the location and size of enemy armies.

But this kind of scouting is pretty far removed from the spying conducted in this film.

So, when is spying justified? Only when it produces a good result (for your side)? When it comes to spying, do the ends always justify the means?

As with many things in life, spying has good and bad applications—and ramifications. It can be used to destroy lives or save them.

At first glance, you probably wouldn’t consider this as a buddy movie, but it is. Penkovsky and Wynne (just like Donovan and Abel in “Bridge of Spies”) forge an unlikely partnership that leads to a sacrificial friendship.

When the KGB begins to close in on Penkovsky, Wynne tells Franks and Donovan, “I’m not leaving him.” Wynne flies to Russia to help extract Penkovsky at great personal risk. This heroic action brings to mind the Parable of the Lost Sheep (Luke 15:3-7).

Penkovsky and Wynne are willing to die in order to protect the secrets that can save millions of lives. John 15:13 says, “Greater love has no one than this: to lay down one’s life for one’s friends.” The ultimate exemplar of that Scripture is Jesus, who was crucified to atone for the sins of those who would repent and follow Him.

Aside from these artistic considerations, the film recalls one of the most dangerous periods in history and leaves us with some nagging questions regarding the nature of spying.

It also spotlights courage and friendship. Penkovsky tells Wynne, “Maybe we’re only two people… but this is how things change.” That haunting line is the heart of the film.

As these two men from enemy countries could work together for the common good, we wish that our politicians could find righteous consensus to solve the many pressing challenges currently facing our nation.